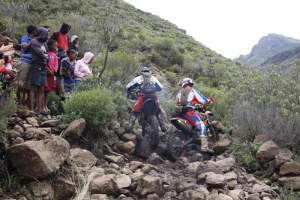 The 2008 Roof of Africa enduro race has concluded and deemed the toughest yet. The three-day, 450km (275 miles) test of heart, strength and skill has its winners, victims and conquerors. Jesse finished 6th in the open class and 28th overall. He said, "This was the hardest thing I've ever done in my life but I'm so glad that I did it. It will make me a better person and a better racer."

This is only the 4th race in 8 years that I've not attended since Jesse has been racing. Waiting for info to come out of Africa was a nightmare. The race started on Thursday. That part of the world is 7 hrs ahead of EST and one would think that with the information age that we live in that you could get some results. Friday at noon, Baboons posted the time trial results for Thursday. Wasting all day Friday and Friday night surfing the internet for info, they finally posted 1st through 6th and 10th only for Friday's stage, Saturday. Still no Jesse Robinson on that post. Now we begin to appreciate, very much, the GNCC Series getting info out right away! THANKS GUYS. Wondering whether or not Jesse made it through Friday's stage, finally a photo showed up on Baboon's web site late Saturday night. It's Jesse in a rock pile. Thank God! At least I knew he made it to Saturday's stage. Much relief just knowing he made it to the last stage. 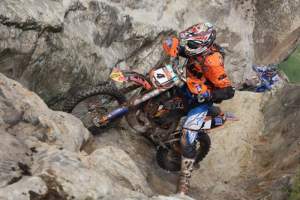 A phone call from Jesse today was well received as he talked about the race. He was really proud of himself for finishing the race although a few mishaps prevented him from finishing as well as he had liked. A prolog started the race with 300 entries and a 4-lap race around the town. The gravel road required a lot of flat tracking skills. Jesse finished 16th but Louwrens Mahoney (GNCC XC1 racer) was the winner of the event, called Round The Houses. This puts you in order to start the 89km time trial. Starting well and feeling good on a bike he had never ridden, Jesse suddenly realized that he has made a wrong turn at some point. After backtracking a ways, he back on track and finishes 21st on day one.
Ready to charge on day two, things were going well as Jesse started picking off riders that started ahead of him until around the 10km mark. A broken radiator sent him back to the start for repairs. After the repairs were made the team informed him that he had to be at BABOON'S PASS by 12:00 or he would time out (race over). They said he would probably not make it, but Jesse said, "I'm going to try." With about 120km ahead of him, and a deadline to meet, he said he put the hammer down and rolled into the check point at 11:59! After starting over and riding some more, by the end of the 200km stage, Jesse managed to get back to 31st. Nine hours in the saddle made for a long day!

I don't know where his energy came from. I was worried about rest and jetlag. Jesse raced the Endurocross in Las Vegas on Saturday night where he finished 3rd in the 4stroke championship. He qualified for the EX night event and ran 3 races. He missed the main event by 1 position, twice again. That's 7 times in 6 Endurocross races. Check the web site for video of the LCQ that he won to qualify. www.jesserobinsonracing.com After that, we flew home Sunday, drove home from Charlotte, washed and repacked clothes, headed back to airport Monday morning and he arrived in Johannesburg, South Africa at 5:30 pm Tuesday. Met up with Louwrens and Kenny, drove Wednesday to Lesotho and was ready to race Thursday morning. Must have had Wheaties on the plane or something! 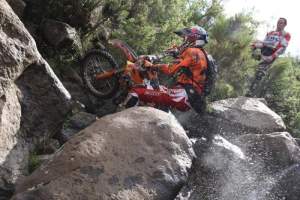 Only 150km, but the most technical. The biggest obstacle of the day is Mt. Machache. Standing 10,000 ft., it will take all your strength to conquer the task ahead. Before you reach the top, there is a 4km climb deemed impassible. Only strength and determination can get you across this pass.

Jesse started the day in good shape and going well. The big, long climbs were preventing the 450 from getting enough air flow. Overheating became the issue of the day. Stopping to cool the bike and find water to go in it was becoming a habit. Making it up to Belekome Pass meant there was only 4km (2.5 miles) to go. Jesse said that it took him 2 Ã½ hours to get up those 4kms but he made it and was on the descent. While on the descent, the chain derailed and lodged between the case and gear. After almost an hour of prying and beating, the chain comes free. Back on the trail and headed home.

After 10 hrs. of torture, Jesse rolled through the finish in 28th place. You don't hear about many people being satisfied with a 28th , but Jesse was as proud as he could be. He said, " I rode well, just ran into a few problems. I diffidently want to come back next year if at all possible."

I think the team that was helping him was DCM AGA LG Red Bull and they have asked him back for next year. They want him to ride a 2stroke next year, as the 450 is not the ideal bike for these conditions. Maybe things will work out so that can happen. I know that I won't be sitting at the computer looking for results, I'm going next year.