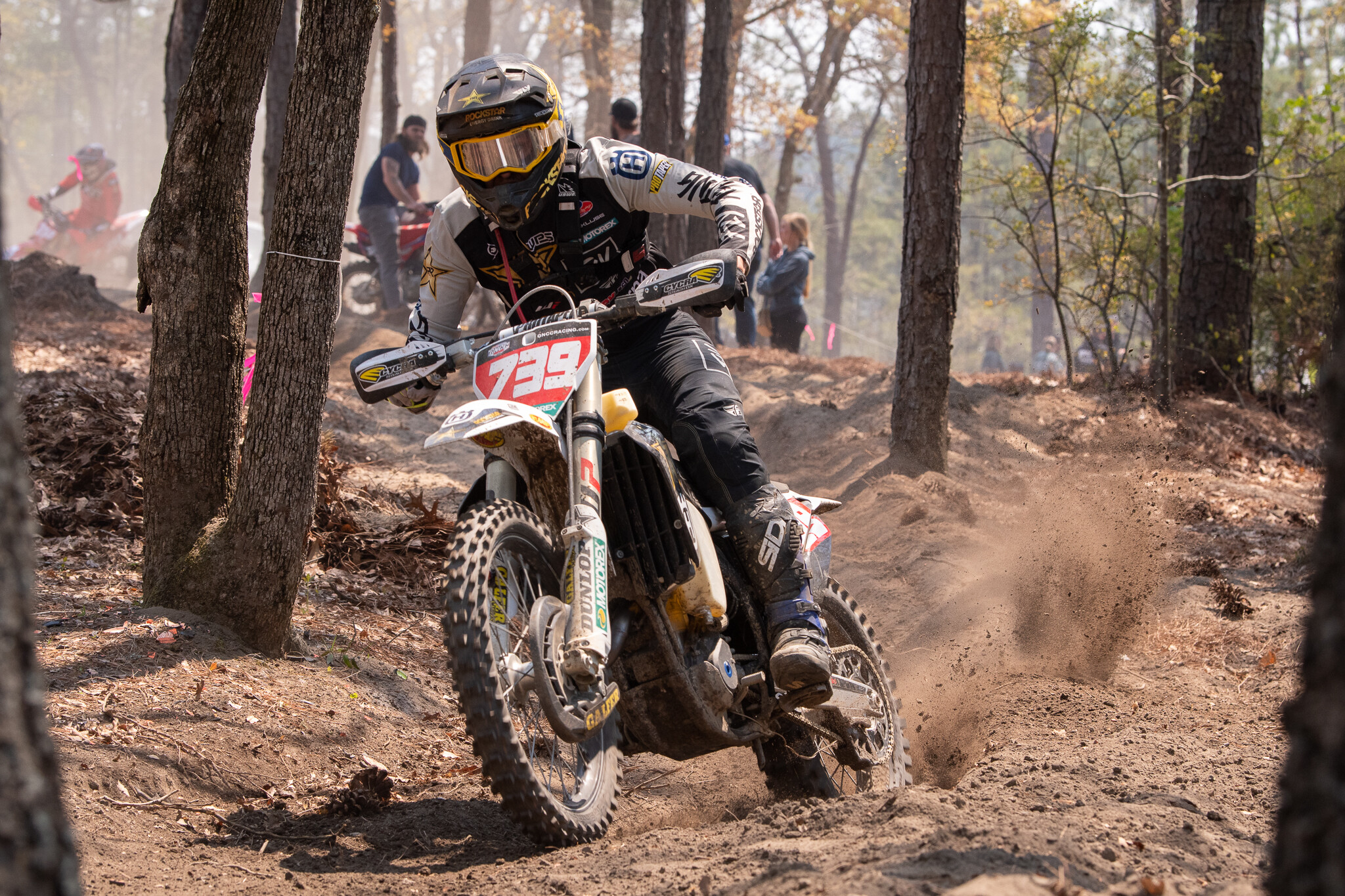 Injuries, that’s been the big storyline this season on Sundays at the track. I say, enough of the glass half empty. We’re going glass half full today! Let’s focus on someone who’s recovered from injury and is making waves in the last two rounds. Trevor Bollinger spent 7 consecutive seasons injury-free. But 2020 and part of 2021 was a different story. Trevor shares with us how he recovered physically and mentally over the last year and how that’s translating into success on the track and in his personal life.

GNCCRacing.com: Let’s go way back to the beginning. When did you first start riding and eventually racing GNCC?

Trevor Bollinger: I first started riding when I was 9 months old, apparently my grandpa put some training wheels on a Honda 50 stuck a screw in the throttle so I could just barely go. I rode that around for a while on the porch till one day I ran though the railing on the porch and almost fell off a 10-foot drop. I think my grandma pulled the plug on it after that. I raced my first GNCC in 2008 at Steele Creek when I was 13 years old. I rode a 250f in 4 Stroke C Lites. I think I finished 9th place in the class.

You’re coming off back-to-back podium finishes. What’s clicking for you this year?

Man honestly, I’m just healthy. I had a good off season at Kailub’s and that’s such a big part in the whole season. I missed all of 2020 as everyone knows and I didn’t think that was that big of a deal, but then I started training again. I had been riding maybe a month or two and I did my other knee, and I was just like I’m going to do whatever I got to do to get back out there. I remember races I could barely walk, and I was still lining up to race. I Couldn’t ride more than one consecutive day; it was just a mess looking back now I don’t even know how I made it through a few of those races. I had zero confidence about my abilities, even my physical conditioning and that is something that doesn’t come back easy. It’s taken two podiums to finally get some of that back.

I want to go back to the third-place finish at the Tiger Run GNCC. That was an emotional finish. You’ve been through hell and back, battling injuries and trying to get back to the Trevor of old. Now that you’ve had some time to process that day, what was it like finally putting yourself in a position you knew you were capable of being?

It was just like getting the monkey off the back, you know it just made everything make sense again I’ve had multiple doctors tell me my one knee couldn’t be fixed and that’s tough to hear when your 25 years old in the prime of your career to prove them wrong to prove yourself right it was just an emotional time for sure.

Obviously, a big storyline this year has been all the injuries in the XC1. Some people may look at that situation and say, “Yeah of course some of these other guys are getting better finishes, rider “X” “Y” and “Z” aren’t out there.” I get their point but can’t say I fully agree. Over the last few years staying healthy and making sure you’re lining up at every round is proving to play a major part in the success of a Pro Rider. A good example of that being Ben Kelley, Jordan Ashburn, and your teammate Craig DeLong. You’re in that category this year, no doubt. Add in a few podiums and maybe even a race win into the mix and once riders X, Y, and Z are back in the lineup they now must face guys who’ve built a tremendous amount of confidence and momentum. Being that consistent guy this year, and capturing a couple podium finishes, how are you feeling about the rest of the year?

I agree with you 100% only because I’ve been though that you know being healthy is part of the game right andI’ve been on both sides. It’s kind of funny I didn’t get mentioned in the list of consistent riders. I never missed a race from 2013-2019 (7 years) I’d consider myself one of the most consistent guys out there, these last 2 years have just been unfortunate but it’s also a part of the game. For the rest of the year, I just want to keep racing like I knowhow and if these guys come back and that’s 5th or 6th place then fine, but I don’t think that will be the case.

Ben Kelley is rolling this season. No pressure, but do you think you can be the guy, or one of the guys that will step up and challenge him as the season progresses?

You know I been with him all winter and Ben is gnarly. It’s not like he’s lightning fast every day, but the dude can just do the same thing over and over again and it’s super impressive to me. To answer your question, yes, I’d like to think I could challenge him. I will need to get a better start and be with him on the first few laps if I want to do that.

Different strokes for different folks, right? As mentioned before, you had to battle back from your own share of injuries. For Stew Baylor, he’s got to have his fingers on the pulse. He’s at the races, still very involved in everything going on. That works for him. Then you have guys like Brycen Neal over on the ATV side who sort of checked out during their injury. Wasn’t at the track and couldn’t bring himself to watch on RacerTV. Can’t argue with either guy’s results after they came back from injury. While you were out, what worked for you to stay physically and mentally strong?

Yeah, for me it was the same as Brycen. It’s crazy but it’s almost like you’re a part of the show you know and like I said I never missed a race I’m 7 years and the first race they started without me I was like damn it really don’t matter if I’m there or not. I know it may sound crazy but when you’re in it as deep as most of us are it’s all we think about its reality. So, after that I just couldn’t watch the year, I was out I would look at results see how my friends did but that was it.

What did you learn about yourself as a rider and as a person while recovering from injury that’s helped you this season?

It honestly just gave me a different perspective on life, and we are only able to do this for a short period of time. It’s still my life 100%, but I realized it’s not everything. I think it’s helped me in my personal life just be more understanding of people and not be so selfish because as racers we must be selfish to some degree. It’s helped me a lot with balancing it.

Enough about racing. Let’s talk personal life. When you’re not racing or training, what do you like to do for fun?

Man honestly before my injury I didn’t have a life outside of racing but now I just enjoy hanging out with my girlfriend and her kid Brody he’s starting to ride now and I like being a part of that I enjoy all the time I can spend with my friends back home even though most of them are involved in the sport I just enjoy being around them and having fun.

Did you get any fishing in at Camp Coker? (This is your chance for a big fish story.)

I used to be a big fisherman but nowadays just try to enjoy being at the track and hanging out with everyone, so I didn’t get to cast any lines.

Who’s in your corner at the races? My girlfriend Tawni, my family comes to a bunch of races and the whole Rockstar Energy Husqvarna team have been behind me 100% through all of this and I thank them so much for that!

Who are the sponsors and people you’d like to thank?

Just everyone that’s been behind me when your winning races or doing good everyone has your back and the people that were with me though the lows that’s the ones I need to thank and they know who they are so thank you!