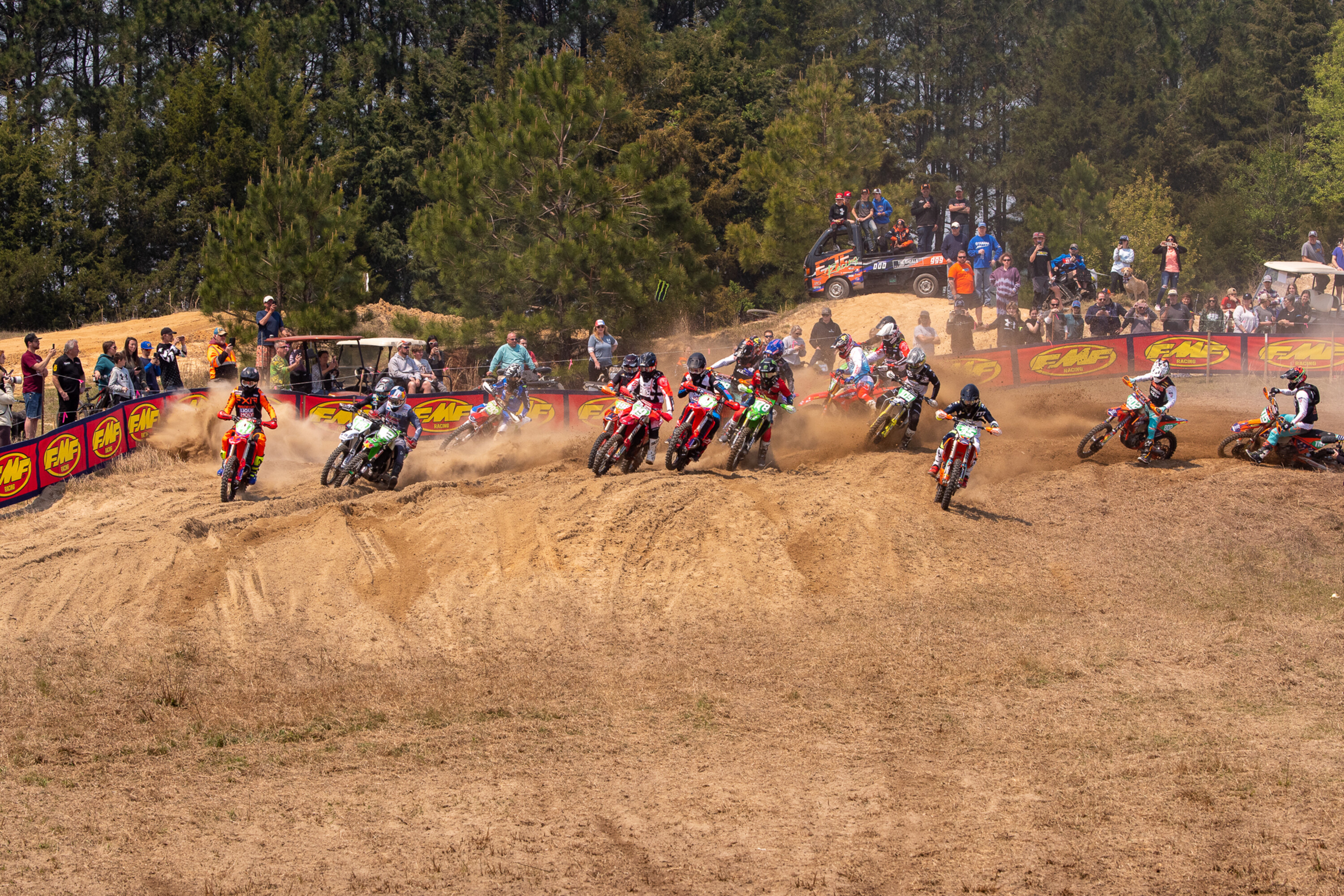 The southern swing of the 2022 GNCC season is officially in the books with the completion of last weekend’s Camp Coker Bullet GNCC. Since it’s addition to the series in 2016 Camp Coker has been a favorite among racers, their crews and families and spectators alike. You’re pretty hard pressed to find a more picturesque facility to hold a GNCC, plus a fun racecourse and when you add in tons of extra-curricular activities off-track, it’s really no wonder why people have grown to love this event so much.

Basically, what I’m getting at here is that if you skipped out on Camp Coker, then you really missed out. It’s a really unique venue and the dirt itself is unlike any other GNCC event we currently race. Coker is on the sandy side but not the deep sugary sand we see down in Florida as it has a bit loamier black dirt mixed into that sand as well. While it does get a bit rough, it doesn’t seem to whoop out like the Florida sand but it still retains a bit of that sand feel. This seems to produce a pretty unique divide among racers.

On the ATV side there are guys who absolutely love Coker and also a fair amount of riders who aren’t huge fans. However, this year it seems like there were more on the side that enjoyed the course. On the bike side an overwhelming majority of racers really loved the course and this was likely due in part to several bike-only sections that were added in for Sunday. It tightened things up in places and added an additional challenge that people seemed to enjoy. Also, the track crew spent quite a few hours dozing the course Saturday night to make things as good as possible for the bikes. So, not only were the ATV guys treated to the fresh course but the bike riders got several completely fresh sections of course while the rest of the course was cleaned up as much as possible.

Overall, Camp Coker once again produced a great time and some great racing. So if you passed on coming to this year’s version of Camp Coker, definitely consider coming next year and keep your fingers crossed that the weather cooperates as well as it did this year because that also played a huge factor in making this what many called the best Camp Coker event of all-time, and some even raved it was one of their favorite events of the past several years!

From here we move on to what is another favorite of, well, just about everyone. We’re a few weeks out at this point but we’re getting geared up to head to Ironman Raceway for the Hoosier GNCC. This will be our first event of the year at Ironman before “the” Ironman takes place in the fall and if it turns out as good as it was last year, then we’re all in for a real treat. Ironman in the spring was a really unique experience and we’re back to try it out again this year.

If you missed last year’s Hoosier GNCC, it was pretty cool. While you’re running a lot of the same trails as the traditional Ironman GNCC, we linked these areas together much different. Also, the fields are all planted so instead of the long, twisty field sections you’re actually forced to skirt the edges with just a few turns here and there or avoid the field all together. This adds another unique twist and helps in putting those sections together a little bit different.

Now, if you’re worried about how the condition of the woods might be after last year’s Ironman “river race” you shouldn’t worry. The track crew went back to Ironman a few weeks after last year’s race and spent many hours dozing the course, and that Indiana farm dirt is like magic. It heals faster and better than any other dirt I’ve seen on the planet, so as long as things stay dry when we roll into Ironman, we should be looking at some epic dirt conditions. Keep your fingers crossed.

We’re also approaching the half-way point in the season, believe that or not, and this is the point where the chase for GNCC National Championships really begin to heat up. Quite possibly none are more heated than the battle for the ATV National Championship as Brycen Neal has actually wrestled the points lead away from Walker Fowler. I’m not sure of the last time anyone has pulled out a lead over Walker more than a couple of races into the season, but Brycen has managed to do exactly that.

Those guys are separated by just one single point as Brycen now has three wins, a second and a third compared to Walker’s two wins and three second place finishes. And who won last year’s Hoosier event? Well, none other than Brycen Neal. Walker Fowler led the opening lap at last year’s Ironman GNCC but had some issues that dropped him out of contention for the win. And who won the Ironman in 2020? Brycen Neal. So Brycen is two for three in the last three races at Ironman Raceway. Could he make it another? Or will a hungry Walker Fowler work his way back into the points lead? Either way, it should be exciting to watch it all unfold.

While Ben Kelley has a comfortable lead in the hunt for his second GNCC National Championship, the boys in the XC2 class have quite the championship battle of their own brewing. Last weekend Ryder Lafferty broke through for his first ever XC2 class win, but with Lyndon Snodgrass finishing second and Mike Witkowski in third, Snodgrass leads the XC2 class points chase by three-points over Witkowski. Ruy Barbosa holds onto the third place spot and is actually just 34 points (which is essentially only four points over a race win) out of the lead while Ryder Lafferty is just three-points behind him in fourth with Jack Edmondson rounding out the top five.

Now, here’s where things get a little more interesting. The spread from first place to tenth place in the XC2 class points is just a total of 64 points, or basically just a hair over two race wins. The same 64-point gap in the overall standings only goes from Ben Kelley in first to Craig Delong in fourth place! It seems like these XC2 guys really keep raising the bar each year and there’s some guys who have landed on the XC2 podium in the past that are actually sitting outside the top ten in class points! This means there’s somewhere around 15 guys who have a shot at landing on the XC2 class podium! Those are tough odds for any rider and it’s going to be interesting to see which of these guys could play spoiler to the current crop of guys landing on that podium.

There’s so much more random stuff to talk about but hey, we’ve got three-weekends WITHOUT GNCC Racing coming up, so we have to save some stuff to talk about for the coming weeks. With that said, that will wrap up this week’s edition of Quick Fill. As usual, enjoy your weekend and we’ll see you back here next week!

This week's random photo of the week may just look like a seemingly normal pile of dirt with trees growing in it, but at one time this pile of dirt was something much more impressive. You may not even realize it when you're riding around the Camp Coker racecourse, but a very small portion of the racecourse utilized what was once a Supercross track.

No, we're not talking about the old Camp Coker Motocross facility where the starting line is and a longer section of course but there was also an actual Supercross practice track on the facility, and this pile of dirt was actually a pretty sizable triple! Hank Moree, who's family owns the facility, was a top Team Green amateur racer in the 80s and 90s with great finishes at Loretta Lynn's including an 85 (7-11) Modified class championship in 1985.

As Hank got older and transitioned to the big bikes, he began focusing more on the family business but still retained ties to racing not only with the Camp Coker Motocross track that remained in operation until around 2009, but also as friends with great riders such as "Big Bird" himself, Larry Ward, who actually lived in the area for a number of years.

Big Bird utilized the Supercross practice track on the Camp Coker property pretty regularly. As Hank got more involved in the family business, racing was set further and further aside and like all racers, Larry Ward eventually hung up his boots after the 2003 Pro Motocross season. Ward actually still finished inside the top 10 of the 450 class (then 250 of course) points in his final season. Along the way, Ward won several Pro Motocross and Supercross events through his career but in addition to that he had a huge amount of podium and top five finishes. Many of which are probably owed to the same overgrown practice track we still skirt the edges of today!