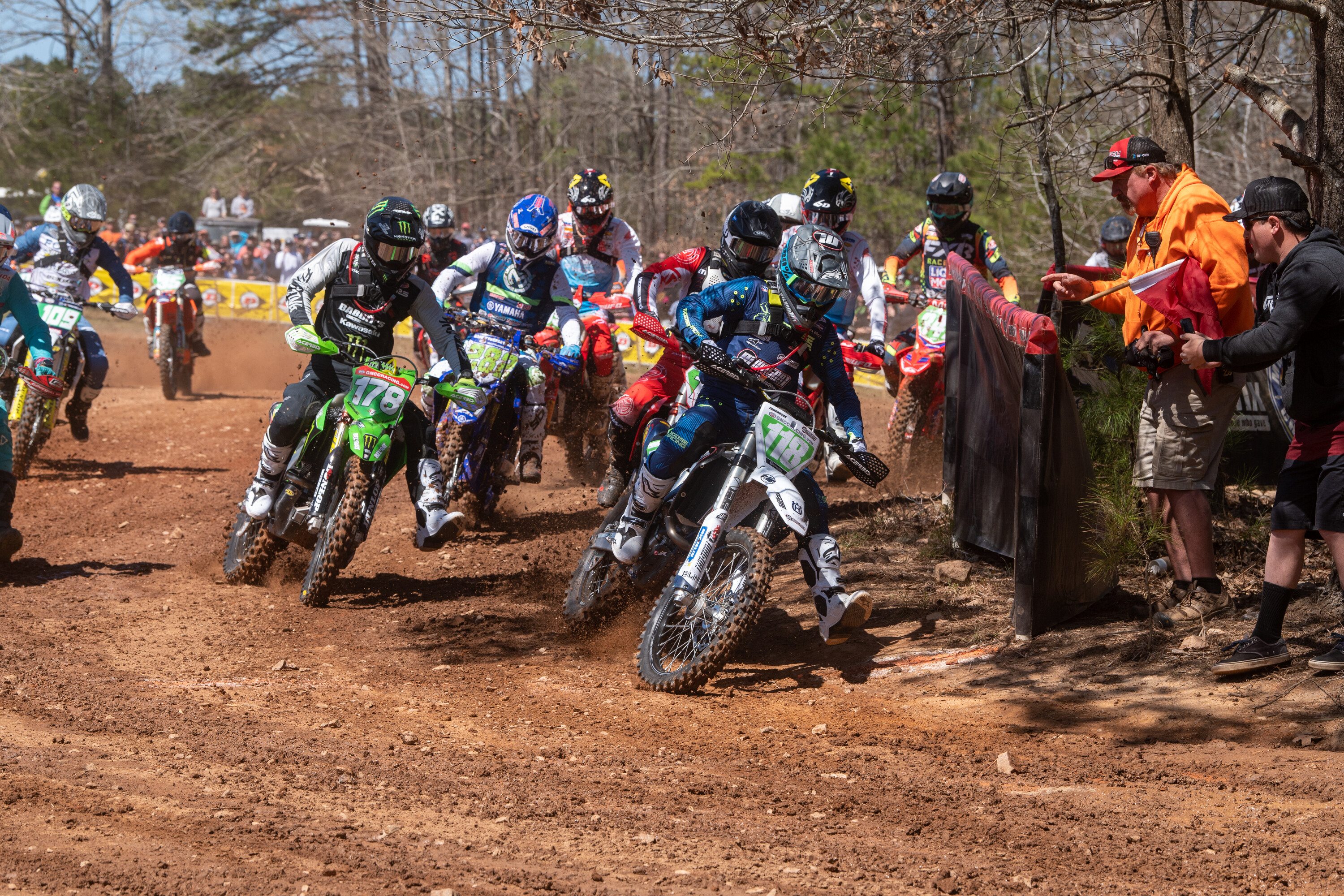 If you missed out on Tiger Run, then you really missed out! A lot of folks were pretty pleased to see that this one was changed up enough that it really felt like a completely different facility than the Big Buck Farm. The track crew worked hard to incorporate sections that weren’t used for the Big Buck event, clean up the few sections that were the same, and link it all together a little bit differently. On top of that, just the right amount of rain fell on Wednesday to keep some moisture in the soil and make for some nearly perfect conditions on the weekend.

These changes ending up making things really fun, and the bike riders got a bit of single track thrown in as well for a little extra fun on top of that. This all played a bit of a factor in the great racing we saw throughout the weekend as when everyone is pushing the limits, doing it on a fun course makes it even more enjoyable. The ATV guys had a pretty tight race with Brycen Neal and Walker Fowler battling back and forth throughout the race with a number of other guys challenging for podium contention as well.

Neal ended up snagging in the win by about 11 seconds over Fowler while guys like Jarrod McClure, Hunter Hart, and eventually Cole Richardson all exchanging those second and third place spots at different stages of the race. In the end, Richardson would work his way from seventh place on the opening lap to end the day on the podium in third while Devon Feehan and John Glauda rounded out the top five.

The win by Neal also helped to tighten the points up a little bit as well. Brycen now sits just four points behind Fowler and with a five-point gap between first and second overall, he has a chance to surpass Fowler for the points lead if he claims another win at Camp Coker. Of course. it really comes as no surprise to see Neal take the win at Tiger Run as he’s become a bit of a specialist at the Big Buck Farm in recent years. Neal has now won the last four events at the Big Buck Farm after sweeping both the Big Buck and Tiger Run events in 2021 and 2022.

It will be interesting to see what he’s able to do when we roll into Coker but another win by Neal could be easier said than done as Walker Fowler actually holds the most wins at Coker. Since it’s addition to the series in 2016, Fowler has won four of the six events held there thus far while Neal has not been able to claim a win at Camp Coker just yet. Neal does have a number of podium finishes at Camp Coker, but just hasn’t been able to put the whole thing together just yet.

On the bike side, Ben Kelley continues to dominate as now has four firsts in the first four rounds… That sounds confusing, doesn’t it? What I mean is Kelley has swept the opening four rounds of the season and while some of his toughest competitors are sidelined with injuries, he just looks to be riding a level higher than he did last year. Kelley also seems to just get more and more crafty as time wears on. He seems to have this calmness about himself during the race and can ride his own race not worrying about what else is going on around him. This can be a huge advantage when things don’t go exactly as planned. Kelley will simply take just a few seconds longer to clear any sort of nasty areas as opposed to diving in, hitting it wide open and potentially get himself stuck.

At the same time, Jordan Ashburn looks to be riding the best he ever has. Ashburn is an XC1 veteran at this point as he’s been in the XC1 ranks since 2012, but just seems to be aging like a fine wine. As the years go on, Jordan improves more and more. After finishing the last two seasons in third place, he’s currently sitting second and hungry to finally grab his first-ever overall win. Of course, Tiger Run was actually Jordan’s first second-place finish of the season as there’s been a few other guys challenging for podium positions.

Craig Delong currently sits third overall in the series point standings, and Delong has always been Mr. Consistent. Dating back to his early XC2 days, Delong has always been really good at clicking off consistent top ten, then top five, then top three finishes. In his rookie XC1 season, Delong has finished sixth, fourth, third and fifth so far. This is exactly what is helping him hold that third place spot and he actually sits just 12 points behind Ashburn.

Delong’s teammate Trevor Bollinger has also put together a solid run so far finishing inside the top ten overall each race, including landing on the podium at Tiger Run with a third-place finish. Rounding out the top five in the overall bike points is Lyndon Snodgrass, who is actually second place in the XC2 class points. Now, this can be a little bit on the confusing side but Lyndon has scored higher overall points than XC2 points leader Mike Witkowski, so Snodgrass sits fifth overall while Witkowski dropped to seventh overall after scoring no overall points at Tiger Run, while he salvaged a 14th place in the XC2 class, which is still a point scoring position.

So, speaking of these guys, Witkowski still holds a one-point lead over Snodgrass in the XC2 points while Ruy Barbosa has climbed into the third place spot after his second place finish at Tiger Run. Also improving their position in the XC2 class is Aussie newcomer Angus Riordan who claimed his first-ever podium at Tiger Run marking an all-foreign sweep of the XC2 class. Two Aussies; Snodgrass and Riordan, plus Chilean Barbosa took the XC2 podium and marked the biggest foreign invasion the series has seen in a number of years.

I talked a little bit about this in this week’s Racer X GNCC Report but to give the gist of it, historically the GNCC series has been dominated by Americans but for a number of years there was a foreign invasion of sorts. Aussie Shane Watts would be the first foreign rider to claim a GNCC title in 2000 and from there Finnish rider Juha Salminen, UK’s David Knight, New Zealander Paul Whibley and Aussie Josh Strang would claim championships from 2005-2010 before Charlie Mullins claimed the title in 2011. Whibley would take another title in 2012 prior to Kailub Russell’s run from 2013-2020.

While it’s been 10-years since a foreign rider took the GNCC crown, Snodgrass is stepping up to make a run at the XC2 title, which actually hasn’t been claimed by a foreign rider since UK’s Jason Thomas claimed his second title in 2015. Of course, the question is where does it go from there? Could these young guns like Snodgrass, Barbosa and Riordan as well as Liam Draper and Jack Edmondson be the next crop of foreign talent to challenge for the GNCC title? And the bigger question is how they will fare when they transition into the XC1 ranks.

While Watts, Salminen, Knight, Whibley, Strang and Thomas are the five foreign riders to claim GNCC titles in the XC1 and XC2 ranks they aren’t the only ones to contest the series full-time in hopes of gunning for a championship. If we look back just a few years, Austrian Pascal Rauchenecker and Australian Daniel Milner gave the series a shot, as did Japan’s Takeshi Koikeda for several seasons. There was also New Zealander Rory Mead who actually won two races in 2012, and still shows up to hang out at some events these days.

But when you dive back at little further, there were also guys like Australia’s Glenn Kearney. Glenn was probably the best rider the series has ever seen that never actually won a race. GK came really close several times, including that epic battle with Barry Hawk through the final turns of the 2007 Steele Creek GNCC. Around 2008 there was also Team South Africa consisting of Kenny Gilbert and Louwrens Mahoney, each of whom put together some decent rides of their own. In the late 90s and early 2000s, Paul Edmondson (who is actually the father of Jack Edmondson) contested the series and won several races.

The groundwork for these foreign riders were laid by guys like Australian legend Geoff Ballard and Czechoslovakia’s Jan Hrehor who were racing the series back in the 80s and early 90s, respectively. Ballard primarily focused on the National Hare Scramble Series but back then a number of those events were held in conjunction with GNCC events, so he raced those and a number of standalone GNCC events as well. He never won a GNCC overall, but he did claim a National Hare Scramble Championship in 1984, likely making him the very first foreign rider to claim an off-road championship in the US. Hrehor won several GNCC events in the early 90s, and even completed the Blackwater 100 with a broken hand!

So while the GNCC series is full of American Pride, we still welcome foreign riders with open arms as it’s really cool to watch some of the greatest riders from around the world challenge some of the best the US has to offer. A lot of these guys aren’t used to the long, grueling GNCC events as many of their races are shorter sprint-style events but it really looks like these guys are starting to figure it out again and it could be really cool to watch it all unfold.

That’s all I’ve got for this week. We’ll be rolling into Camp Coker next week so be sure to check back then for the latest low-down from Coker. Until then, enjoy your weekend and we’ll see you back here next week.

Random VIDEO of the Week

This week we're mixing it up and throwing in a little video clip for the Random Photo, er, Video of the Week. I'm still not entirely sure what Michael McAvoy did to his quad at Tiger Run, but it was pretty broken. Here's Jeff Russell towing Michael back to his pit!