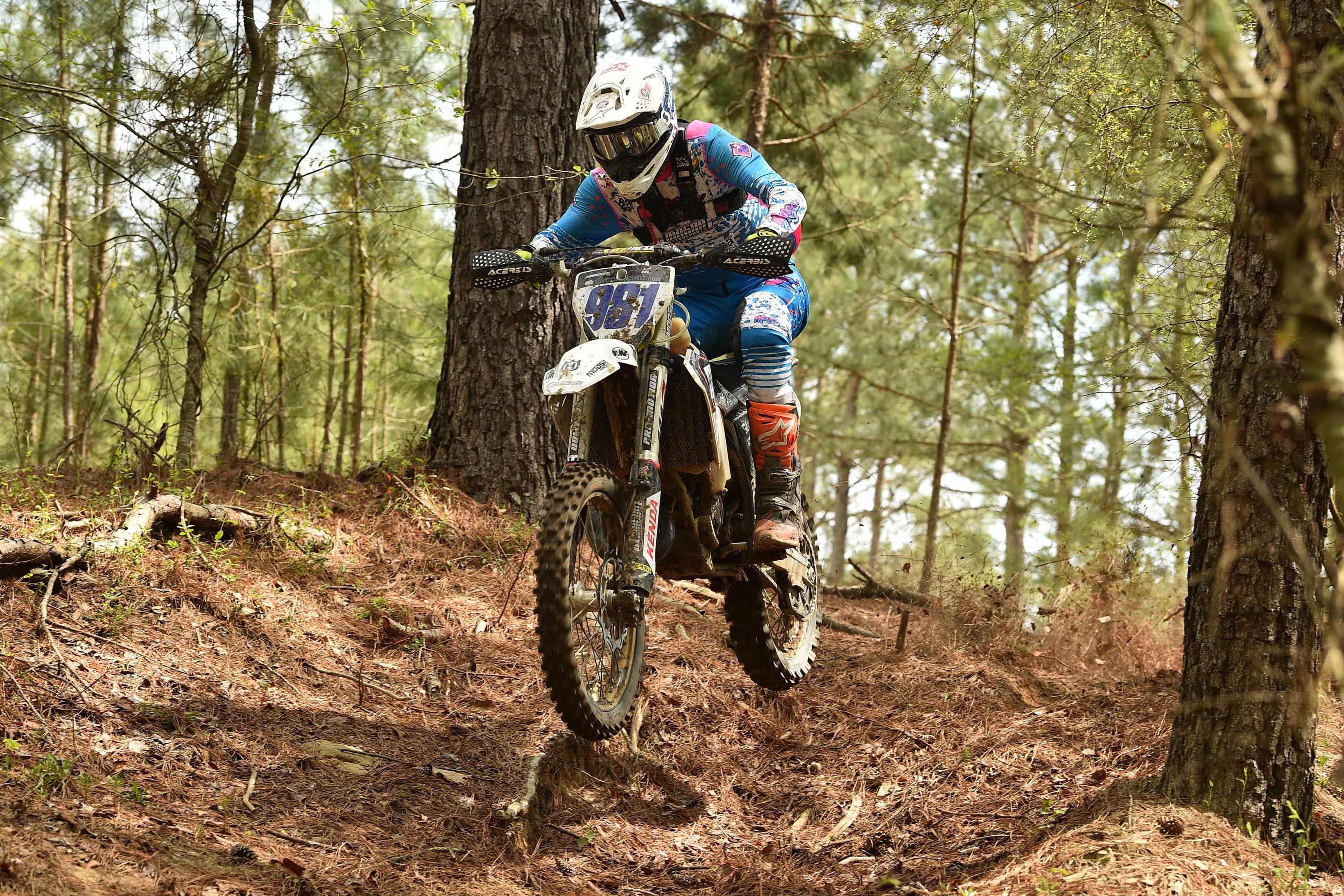 Norman Vincent Peale is the author of, “The Power of Positive Thinking.” He wrote, “Repetition of the same thought or physical action develops into a habit which, repeated frequently enough, becomes an automatic reflex.” I can’t think of a better way to describe the process in which Jonathan Johnson has found his success. Winning the FMF XC3 class, through four rounds, has become an automatic reflex.

Repetition breeds success. Trust the process. Stay on your grind. Pick whatever cliché you want, they all seem to apply to this week’s featured rider, and for good reason. Jonathan Johnson may come off as all business, but make no mistake, he’s figured out what it takes to win. In fact, he’s the only rider at the Pro or Pro-Am level (Bike or ATV) to remain undefeated after four rounds of racing.

GNCCRacing.com: The last remaining undefeated Pro or Pro-Am rider, Jonathan Johnson! Thanks for joining me this week. Let’s get started, tell us about you.

Jonathan Johnson: Been riding and racing for as long as I can remember. Just recently turned 24, so I’m getting a little older. But still feel like I’m living the dream.

You raced in the XC2 last season. This year you made the switch to the FMF XC3 125 Pro-Am class. What motivated you to make the switch?

Yeah, I raced XC2 last year. Around the midway point of the season I started weighing my options for next season. I had a bit of a falling-out with Honda. It just didn’t really work out. I wasn’t making much traction finding a ride for 2021 and hadn’t really given the XC3 class much thought. Finally in November Jacob Fetty started calling me, blowing my phone up, telling me to call Chris Landers. Finally Chris got ahold of me and offered me a deal for the XC3 class. It’s been a great fit.

Speak to the success you’ve had in the class. Competition is strong this year. What’s helped you click off four wins in a row to start the year?

I told Chris (Landers) if he needed someone to win in the XC3, I was his guy. I want to win, the 125 suits me well and I really like it. As far as the competition, it’s not been a cake walk. It’s a tough class and you’ve got to make sure you’re putting in the work throughout the week to make it work on the weekend. I think that’s where Jacob (Fetty) helps us out tremendously. He really helps step your game up and take it to the next level. Chase (Colville) and Zack (Hayes) have really been huge this year. Those guys are hungry. And you’ve seen some big names like Russell Bobbitt coming out to race with us. It’s been a strong season for the class.

Tell me more about training. What’s the secret?

Oh, nothing really, sitting around playing XBOX, eating potato chips, and doing whatever I want to do.

Keeping the training program under wraps I see…

Meh, a little bit. Honestly, Jacob Fetty has us doing a little bit of everything really. He’s been a huge help to everyone.

Making the move from XC2 to FMF XC3, I gotta think, even before you accepted an offer from Magna1 Motorsports you thought, if I do this, I want to do it to win the championship.

Yeah, for sure. I told Chris I’d do well in XC3 and get wins. That was the goal and so far, so good. I want the championship.

What’s your mindset on race-day. I spoke with Ronnie Rusch last week and his perspective wasn’t really on fellow class riders, but rather the XC1 in front of him. As an undefeated points leader how do you measure a good race for yourself outside of just winning the class?

Yeah, very similar. I keep my eye on the times of guys in the XC2. I know if I’m pacing with those guys then I’m doing well in my own class. And I keep my eyes on my overall. The best overall I’ve had this season is a 13th in Florida. That’s good, but I think I can get better.

Nothing really stands out too much to me. They’re all GNCC’s, they’re tough and in my mind, I know we all gotta go out and race on the same terrain. If I had to pick, I’d say Big Buck in South Carolina. That’s the home track for me. I do like Georgia too. I surprised myself in Florida this year. Finishing 13th in the overall was great. I think just coming into the season in better shape and flowing with the track well paid off for me.

Away from racing, what do you do for fun?

I hunt, ride four wheelers around and try to go fishing as much as I can.

Ride four wheelers!? You want me to leave that out of the interview? You might catch some heat from your fellow bike guys!

Oh, yeah, you’re right. Maybe we should leave that out. *Laughs*

So, I’m guessing, like Thad Duvall and Stew Baylor you are hoping the season runs smooth so we don’t have a make-up round in November so you can make sure you’re sitting in the deer stand?

Yeah, hopefully we’ll be in the deer stand around that second week in November.

Four rounds of racing, four wins. How do you celebrate a win?

Big picture, what are the goals for you this season and into the future?

My main focus right now is winning the XC3. We’ll see what happens after this season, but for now I want to enjoy this run. Outside of that, I really think I can crack a top ten overall this year. I’ve got the 13th back in Florida so I really believe I can get into the top ten on adjusted time. It’s a difficult task with how stacked XC1, XC2 and XC3 are, but I believe I can do it.

Outside of racing, how do you support yourself financially?

I actually run my own mowing business. I do a lot of work for Bojangles. That and cut grass for some residential clients. And I buy and flip anything I can get my hands on. Always hustling. I’ve cut back a little bit on the amount of lawns I mow so that I can make my schedule work with racing. But yeah, it helps to run your own business to ensure you have the schedule that allows you to make all the races.

Thanks for joining me today! Get out there and try to keep that perfect streak alive. Who would like you like to thank?