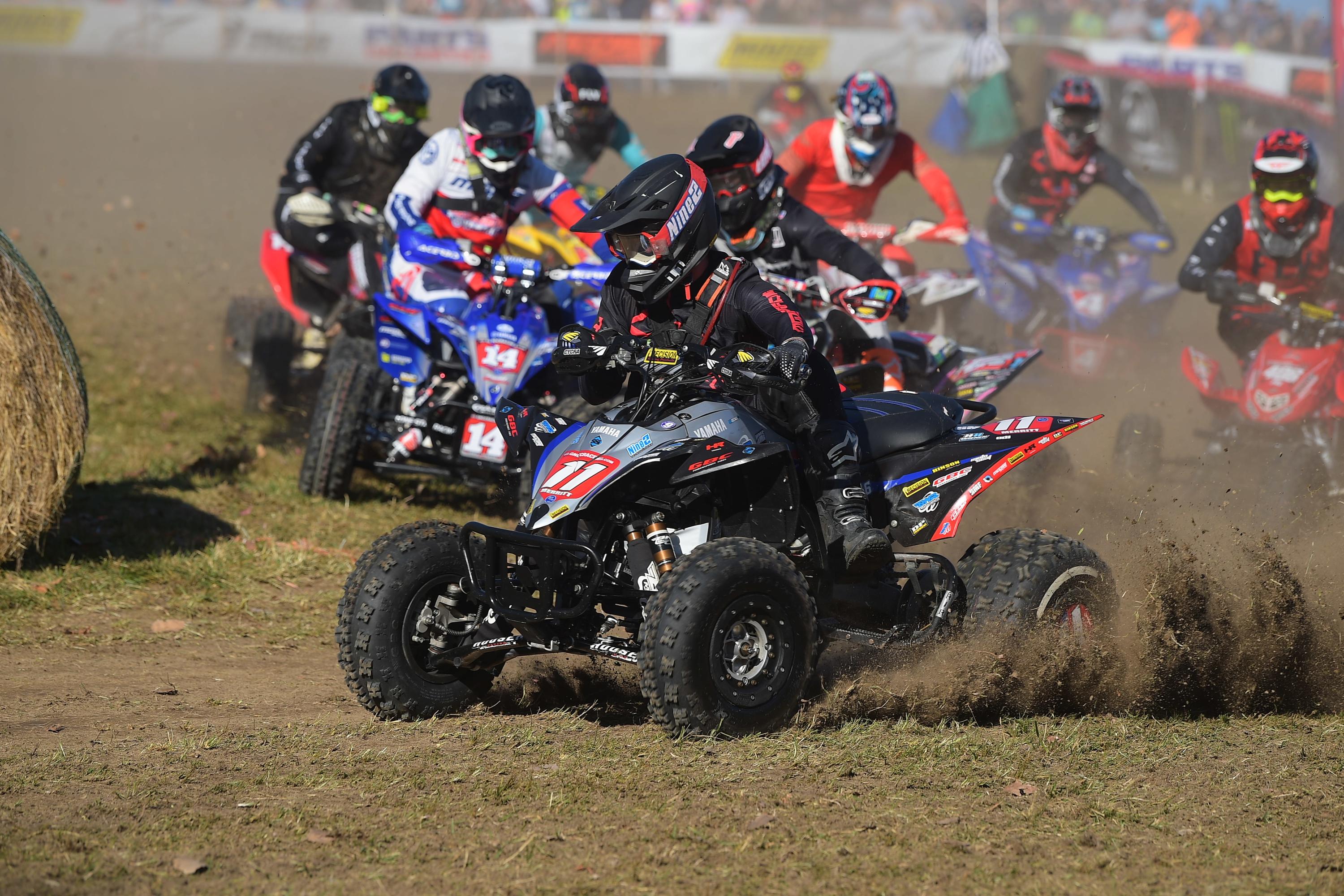 Round 13 is done and dusted. I can’t believe I’m saying this, but that’s a wrap on the 2020 GNCC Racing season. We made it through round 13 and got in a full season amidst one of the wildest years in the history of the world. Give yourself a pat on the back because this is an impressive feat and here’s to hoping that things get a little more normal in 2021. As for the final round, the Buckwheat 100 turned out to be pretty darn fun!

CJ Raceway is no stranger to racing as it’s hosted a number of events over the years but the GNCC crew came in and really made it feel like a different place. We spent a good bit of the week leading up to the race adding in new sections and reworking some of the existing sections so it wouldn’t really feel like the same track a lot of you from the local area had been to before. It seemed like everyone really enjoyed it. It was a little tighter, a little twistier and that section from about the 5.5 to the 7 was fairly technical!

We’re working to get the 2021 schedule together and hopefully out sometime in the coming weeks. It’s no easy task to create a schedule in a normal year, but it’s even tougher with the amount of uncertainty in the world today. If you were at any of the starts this weekend when Tim Cotter spoke, he mentioned that the season will start very similar to the last few seasons but it does not look like we’ll be returning to Steele Creek.

It’s no secret that the last several years we’ve really filled up the Steele Creek facility and we had planned to be there in 2020 with some serious changes to the course layout to keep us away from the creek, but that also required some serious changes to the weekend schedule as well. Unfortunately, this just won’t work out moving forward for 2021 so we’ve reached a mutual and very tough decision to move on from the Steele Creek facility. We’ve always loved being in the Western North Carolina area, and that’s especially true for me as I was born and raised in North Carolina, albeit around two hours away but I also lived just a few mountains away in North Wilkesboro, NC for about a year and a half. So, we’re all really bummed to move on but you can only cram 10 pounds of meat in a 5-pound bag for so long before it just doesn’t fit. Know what I mean?

With that said, we are exploring several different options down south and have some places to check out. However, as always, if you know of anywhere that might be suitable for a GNCC event (especially in western North Carolina or in the southeast!) feel free to drop me a line at [email protected] with some details. But, be aware that we really need it to be somewhere around 500+ acres with somewhere close to 100 acres of parking. I know a ton of places in North Carolina, but I don’t really know of anywhere that has the parking!

Of course, we still have an entire off-season to get through before the 2021 season starts and while it’s ultimately a little shorter than normal, there’s still a lot of time off and for some it’s much needed. Not only does the off-season allow those who may have been injured the chance to heal up, but it gives everyone else the opportunity to figure out what they need to work on for next season. Speaking of which, the guys in the XC2 bike class had a pretty intense season this year and 2021 could be even bigger. We saw a three rider battle between Craig Delong, Mike Witkowski and Johnny Girroir. All three of these riders exchanged race wins, and the points lead several times throughout the season. Unfortunately Girroir would go down hard at Ironman and suffer a concussion that left him sidelined for the final round.

Delong would end up with the XC2 title but now Witkowski and Girroir both know where they need to be in 2021, as does Delong. Yes, the 2020 title chase was probably the closest and most intense XC2 title chase we’ve ever seen but there’s a really big chance that 2021 could be just as close, or even closer! Not only are all three of these guys huge threats at the front of the pack but there are several other guys who could play spoiler as well. Liam Draper and Cody Barnes are two riders who have been on the XC2 podium more than once, and in addition to them there’s also guys like Ryder Lafferty and Jonathan Johnson who could find themselves at the front of the pack as well.

Of course, there’s a similar story at the front of the XC1 pack as well. With Kailub Russell’s professional GNCC career coming to an end, it leaves the door wide open. Many folks have expected Thad Duvall to step up and be the one to beat but if Steward Baylor’s performances since returning after summer break are any indication of where he’ll be in 2021, then there’s some really stiff competition right off the bat. Additionally, Ben Kelley has also been on fire through the late rounds and Josh Strang seems to be like a fine wine; he just gets better with age!

At the same time, there’s also Thad Duvall and Trevor Bollinger. Both of these guys were injured for the majority of the 2020 season but returned late in the year. Duvall made the final three rounds, while Bollinger only made the final round last weekend. Sure, the results weren’t exactly what either rider strives for but these guys really seemed to play it smart. Instead of going out, pushing the limits and risking further injuring themselves these guys have ran with the pack and figured out what they need to work on for 2021.

So, just because these two guys weren’t gunning for race wins in these late season races doesn’t mean they won’t be there when the 2021 season begins. Outside of the win or podium finishes, they really didn’t have much to gain. Both were well out of any sort of top points finishes so the smarter thing for these guys to do would be to go out, race their way back into race shape and get ready to start fresh in 2021. Couple all the aforementioned riders with the usual contenders such as Jordan Ashburn, who rode extremely well at the Buckwheat, Layne Michael, Grant Baylor and Josh Toth and more, and there’s a real recipe for some close racing in 2021.

Speaking of Grant and Toth, both of these guys and Steward Baylor all have a mathematical shot at the AMA National Enduro Championship, which will be decided this weekend in Texas. Grant actually holds a 21-point lead over Stu and Toth sits third just 4 points behind Stu and 25 points out of the lead. Grant has a fairly cushy lead but it’s definitely not over as he still needs to finish at least 12th overall to secure the title, and that’s if Stu were to win the race. Any sort of freak mechanical issue, or a hard crash could cost him the title. If Toth were to win, Grant would still need to finish 16th overall to wrap up the title. Like I said, Grant has a cushy lead but he really can’t count his chickens yet; they haven’t hatched! Know what I mean?

That’s all I’ve got for this week. I promise we’ll show the ATV guys some love next week. It’s a long off-season so we’ve got plenty of time to talk about a lot of different things in the coming weeks. Until next time, enjoy your weekend and we’ll see you back here next week for another edition of Quick Fill!