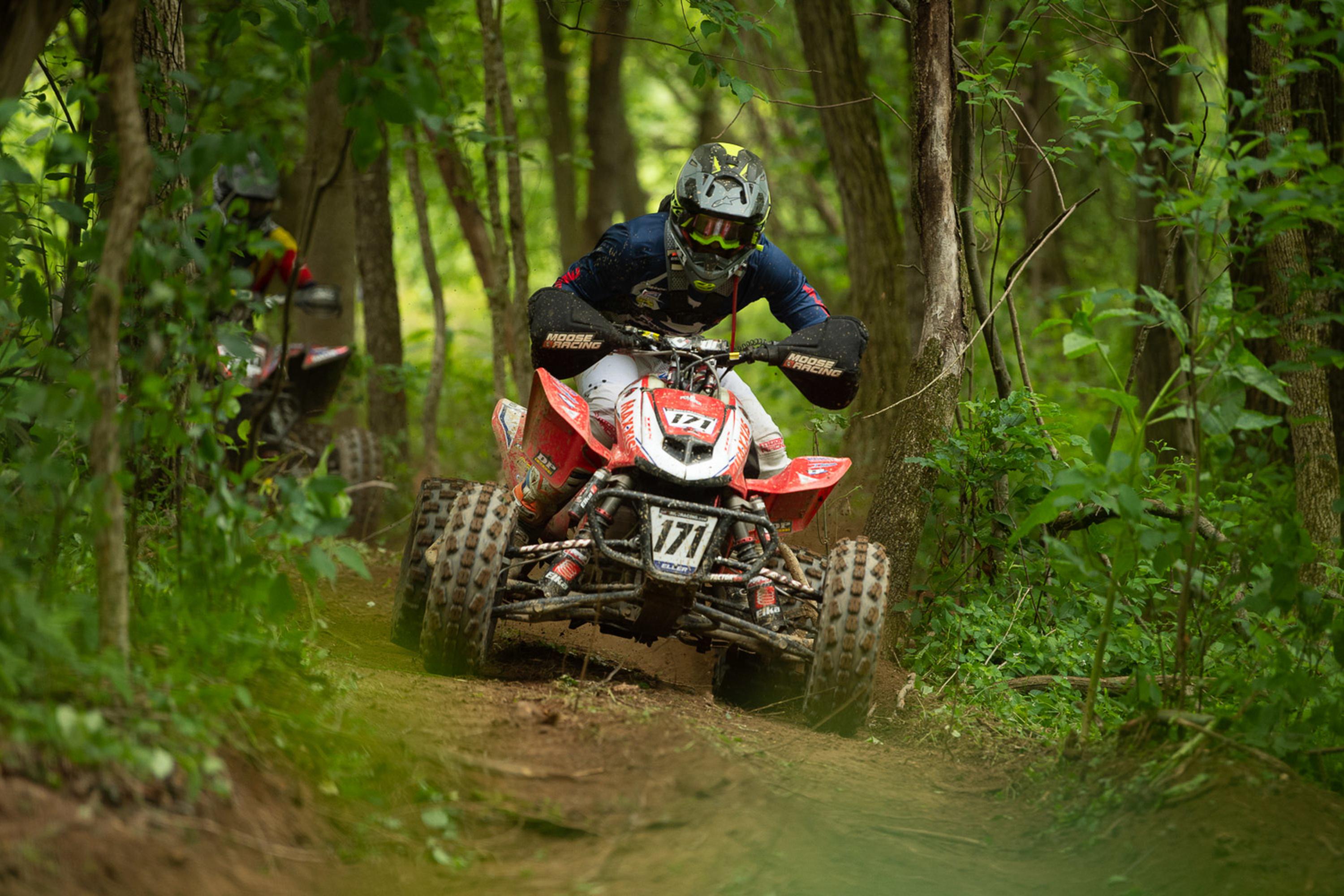 Grayson Eller is the current Amateur overall points leader. I interviewed him prior to the summer break, but due to the hectic summer schedule here at Racer Productions, his interview never got posted, but late is better than never! He is 21 years old, from Salisbury, North Carolina. He also competes in the Pro-Am class in the ATV MX series – it is only recently that he began really focusing on GNCC racing, but so far he’s been pretty successful at it!

Hey Grayson, hope you’re doing well! Why don’t you start off by telling us a little bit about yourself?

My name is Grayson Eller I’m from Salisbury, North Carolina and I’ve been riding and racing ATVs since I was seven years old or so. My dad raced dirt bikes and he wanted me to race dirt bikes too. So, he got me a little DRX90 to practice on before he got me a dirtbike, but once he got one and tried to get me to ride it, but I never really wanted to because I liked the ATV more (laughs). Then one day I crashed the dirtbike into a tree, and after that I really didn’t want to ride it. I’ve been on the ATV Motocross circuit since I was ten or eleven and just recently started moving over into cross-country racing. This is, I think my fourth year racing GNCCs and I’ve really enjoyed it so far.

Looks like you’ve had a pretty good GNCC season so far this year, since you’re currently leading the battle for top amateur…

Yeah, I never would have thought I’d be in this position! Like at the beginning of the year I knew it was going to be tough – there were a lot of fast kids moving into the A classes, and I didn’t know who would be moving up into XC2 versus who would be staying back in the amateur ranks. So, I just went in with a very level head about the whole thing. The year started kind of slow, with a third place and then a second. I didn’t really let it discourage me, and I didn’t really think I was that far off from where I wanted to be. I’ve been consistent and made it on the amateur overall podium every race but one, and now I’m leading the points and I think I’m only one win away from locking the top amateur title up. It’s an unbelievable feeling and I’m looking forward to moving up to XC2 and continuing to improve as I go.

Tell us a little bit about racing the ATV motocross series – I didn’t realize before this interview that you did that as well.

I currently ride the Pro-Am class, which is essentially like the XC2 class here at the GNCCs. Over there, it’s pretty much myself and two other kids – I’m 21 racing these super-fast 16 year-olds, which can be a little frustrating (laughs) – but of course there’s always going to be those next kids coming up, that always blow your mind when you compare how fast they are now to where you were that age. It can be discouraging to a point, but it also motivates you to work that much harder. It’s been different for me this year, because my focus has actually been more on GNCC, just because that’s where I’ve been winning. I’m not sure what my main focus will be next year, since I plan on moving up to the pro class in ATV MX and then the XC2 class for GNCC.

What do you plan to do over summer break to help keep the momentum going?

I’m actually going to take some time off! (laughs) That’s because between ATV MX and GNCC I’ve been racing pretty much every weekend for the past two or three months. During the little break we had in March and April I spent a lot of time trying to get faster, working my hardest to get past those second and third place finishes and get to where I want to be. So I’ve gotten to a point now where some time off is duly needed. We just finished up Red Bud this weekend, and now I can recuperate and come into the last four rounds of GNCC feeling good, not digging myself into a hole. It’s really easy to do when you’re trying to keep up on your training while dealing with the stress from traveling and only being home for a few days at a time.

Yeah, taking that break can make a huge difference sometimes! Speaking of differences, what did you do differently with your training during the covid break that allowed you to make the gains you were talking about?

Focusing on my training and dialing in my nutrition. We got a bunch of tests done that really helped with that. I learned a lot about how to improve my race day an on-the-bike nutrition. For example, we found out that I’m a super salty sweater, which means I was losing electrolytes faster than the average person does. So even though I’d be drinking plenty of fluid, I’d still be dehydrated because of the electrolyte loss. Once we addressed problems like that, I started to feel way better on the bike, physically speaking.

Backing up a bit, you mentioned that you hadn’t really started to focus hard on GNCC, relative to moto, until this year, when you started winning. But why did you initially decide to do any woods racing, even casually?

Roughly four years ago, there was a kid I went to high school with who bought an ATV and then decided to sell it. He knew that I raced MX, and he said he thought it was a MX race machine. The kid brought it into the shop so my dad could look at it, and we quickly realized it was a cross country race bike, not a MX one. The kid didn’t want much for it, so we decided to just buy it ourselves to see what it would be like. Unadilla was my first race. I made it two laps before the bike blew up, but I had enough fun that we decided to finish the year out. My teammate, Noah Mickelson and I, we were just riding the C class, could barely get around the course without making a ton of mistakes. The following year I moved into B class and he moved up into A.  We did it right this time – got the bikes set up well, and tried to learn as much as possible because the learning curve in the woods was just huge…

What was most difficult of learning how to ride in the woods, coming from a moto background?

Learning to slow down and not have so much tunnel vision in the woods. You don’t have to just hit the one main line as hard as possible for the entire two hours… there are other lines you can take (laughs). I would just hit the first line I saw, and a lot of times I’d ride too hard, and the get stuck or hit a tree, things like that. Trying to pace myself was also something I had to learn. Like in MX you stand up pretty much the entire fifteen-minute race, but if you tried doing that in the woods, you’re going to blow your back out in the first forty-five minutes, and you’re not even halfway done yet. There has been a lot of learning and I think I’ve come a long way as far as being smooth and learning to flow through the woods.

Besides moving up to pro in ATV MX and XC2 here in the GNCCs, do you have any longer-term goals for your racing career that you would like to share?

I think one of my biggest overall goals is to get a top-ten finish in both classes at the end of the year, in moto and GNCC. It would be really cool to go to the banquet and stand there on the stage for both things. I would say that’s my ultimate goal.

Are you fortunate enough to race full-time, or do you have a day job or attend school?

Yeah, I’m lucky enough that my dad is able to back and support me 100% thorough the Phoenix Honda team. I’ve been super blessed that way, and I’ve been put in a position where I’m able to succeed. I really appreciate how much he does for me, and with Honda backing us now I’m super grateful to them as well for helping us to put a competitive program together. I think we have a really awesome team!

What does an average day look like for you?

Right now, I’m up at Joel Hetrick’s house, with Brandon Hoag, two of the ATV MX pros. We usually train six days on, one day off, with Sunday being our off day. We’ll wake up in the morning and start the day with bike work, that’s pretty much a daily ritual. Once the machines are good to do, we’ll train around lunchtime. We’ll ride two days a week, maybe three if we’re not racing and then for off-the-bike training we do a lot of road biking. Plenty of low-intensity training to build up a good cardio base. I’ve really been focusing on getting adequate sleep too, that’s something I feel a lot of people overlook.

Why are you passionate about racing? What made you want to pursue this full-time as a career?

I’ve been doing this since I was so little… I wasn’t sure at first that this was something I wanted to pursue 100% for a job. I was kind of juggling racing with college and classes last year, and it was just miserable. I didn’t feel like I could put my full effort into either one. So I decided to take a step back and really throw everything into racing. That way I know for sure if I’ve got it or not – like if I did it half-heartedly for five years while trying to do other things and I don’t get where I want to be, I’ll never know if I could have or not. I don’t want to look back and wonder what could have been. That’s why I’m trying as hard as I can now. And if I still don’t make it, I’ll at least know that I gave it everything I had and can move on to the next part of my life with no regrets.

Tell us something about yourself that doesn’t involve riding or training.

I don’t have much life outside of racing right now (laughs). I used to play baseball a lot. I was pretty good, and when I was younger I had a friend that I really bonded with through baseball. We grew up playing together, and it was a really hard choice to make between riding and baseball when I finally did have to choose. Maybe if I hadn’t chose racing, I would be playing college ball right now.