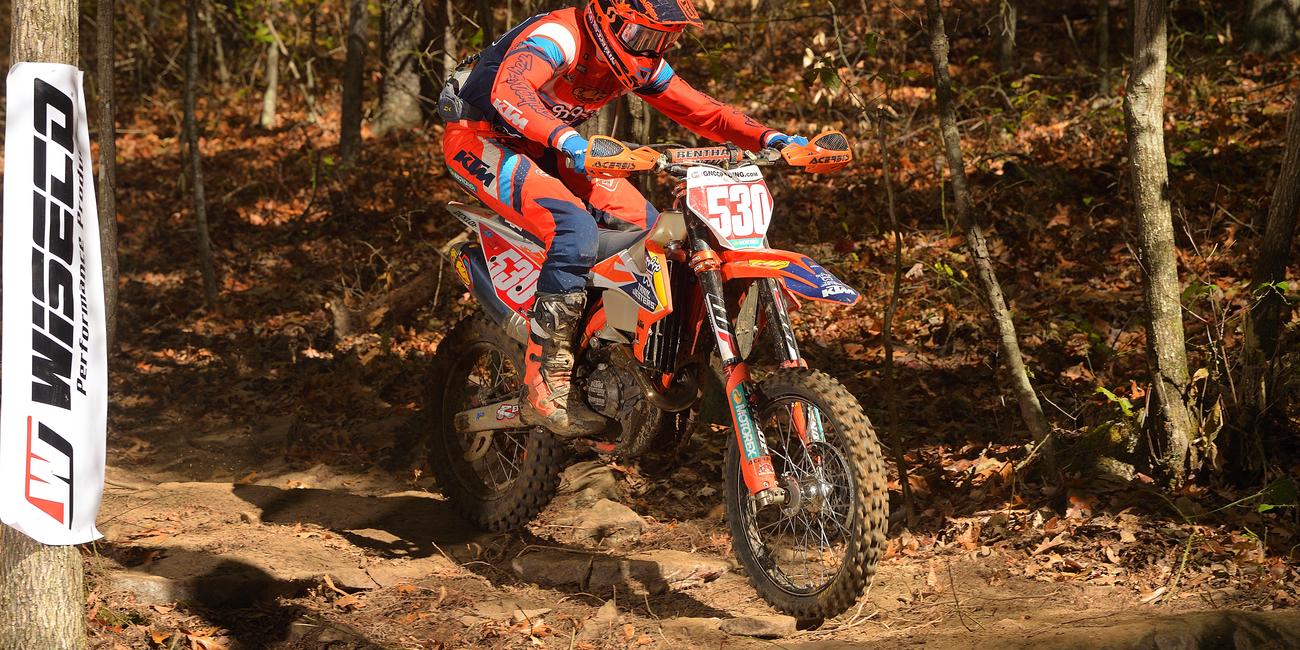 Ben Kelley won the overall and XC1 class for the first time last weekend at the Mountaineer. That statement is impressive enough on its own, but when you add the fact that this is only his second time racing the XC1 class and that 3 years ago he was virtually an unknown rider racing locally in New England, it becomes downright incredible! Twenty-three-year-old Kelley wrapped up the XC2 title early this year, so decided to bump up to XC1 in preparation for the 2020 season. Kelley has a bright future ahead of him in GNCC racing, and we look forward to watching him over the next several years!

GNCCRacing.com: I know we have a lot to talk about… let’s start with the XC2 title. How does it feel to have successfully defended that championship?

Ben Kelley: It feels really good to back up my first XC2 championship. This year’s title chase was a lot different than last year’s was. The 2018 season was crazy because Josh [Toth] and I fought tooth and nail for race wins at every round, and it ultimately came down to the last round to decide the championship. This year, I had a perfect season. I worked harder and was in a better spot coming into the year. Everything just went exactly how I wanted it to and I think that’s very rare.

Can you give us a brief overview of your season?

I’ve had an amazing season going so far. I’ve had some struggles along the way that I’ve had to overcome, but come race day I’ve been able to execute the race the way I needed to and almost everything has gone exactly to plan. I went 10 for 10 in XC2, which is honestly hard to wrap my head around. I just focused on race wins. It’s been an incredible season in my eyes.

That’s for sure. I know your first XC1 race was a bit disappointing, but you definitely made up for it with the second outing! Tell us a little about the race.

Yeah, my first race in XC1 did not go as planned with a DNF. I’m happy I was able to get redemption this past weekend. I came into the weekend shooting for a win and knowing I wouldn’t be happy if I was off the podium. In the end, to actually end up winning the race and the overall is crazy though! Everything just worked out. I put myself in a good spot and was able to run up front all race. Luck was on my side and I got the job done. I’m still riding the high from that victory.

Which accomplishment are you most excited about – the XC2 title or your first overall win?

My XC2 title does mean a lot to me, but my first overall win is my biggest accomplishment to date. Not many people are able to do that, so it feels good to add my name to the list. So many things have to go right to win, and like I said, everything just worked out in my favor.

Did the fact that you had been on the overall podium before make it less intimidating when it came time to line up on the front row?

Definitely. I still had pre-race jitters and some nerves, but I’ve been on the overall podium a handful of times already. I have also run some of the fastest lap times and at times led the overall from XC2. I knew I had what it takes. It did help make that big jump up to the front row less intimidating, and I was able to go into it just like it was any other race.

Was there anything you had to adjust in your training or program to get ready to compete on a 450?

No, there weren’t any major changes. I’ve had a 450 at home to practice on for a while now. Just riding that bike made me stronger and got me ready to race one.

For a lot of people, it seems like you kind of came out off nowhere! You didn’t grow up racing GNCCs but were able to become successful at them really quickly. Where did you grow up racing and what series did you do?

Yeah, I hear that a lot! I grew up racing the NETRA hare scramble series and J Day off road series in New England. I never had intentions of racing professionally, I just raced for fun on the weekends because it provided new places to ride. I was pretty good though, and continuously progressed over the years. Finally, in 2016 I was pushed by Ross Mauri (the owner of Trail Jesters) to give GNCC racing a shot and it really just took off from there.  I’m really happy now that Ross put the idea in my head and saw the potential in me. It all has happened so fast and I’ve even surprised myself at what I have been able to accomplish…. I do work hard, but I’m also just trying to have fun, enjoy the ride, and make the most out of all of the opportunities I’ve been given because of racing!

As a kid, did you ever imagine that you would someday overall a GNCC?

I definitely didn’t expect to ever win a GNCC overall. It’s feels pretty surreal and is still hard to believe.

I will be racing GNCCs as an XC1 rookie next year. I’m hoping to come out swinging and have a strong year fighting for some more wins.

Tell us something about yourself that is not motorcycle related.

Nothing really comes to mind. The only other thing I really enjoy doing and have a passion for is mountain biking with all my friends. Some of them own a local bike shop, and I try to join their Monday night group ride. That’s actually what I did for recovery today. I don’t go crazy, usually just ride an hour or an hour and a half for fun – I’m definitely a little sore and beat down the day after a race.

I want to thank the whole Trail Jesters KTM racing team, my trainer Charlie Mullins, my mechanic Michael Hall, my parents, TLD, Scott Goggles, and the rest of the team’s sponsors and support crew. Thank you.