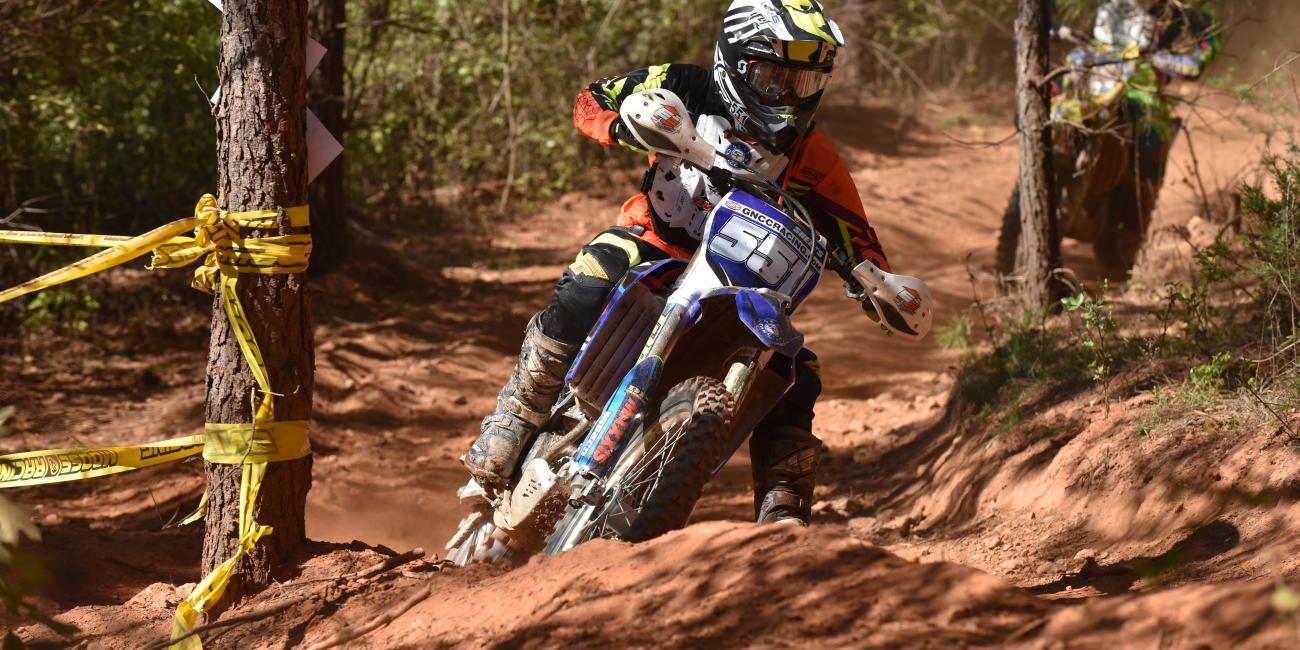 Becca Sheets has been a fierce WXC competitor in the GNCC ranks for several years. We’ve seen her get faster and faster and this year, she was a consistent front runner and clinched the championship with 3 rounds left to go! This is the first time in recent history that a factory backed racer did NOT win the crown. GNCCracing.com caught up with the privateer to find out how she did it!

GNCCRacing.com: Hi Becca! How are you today?
Becca Sheets: I’m good. You caught me on my lunch break, so this is good.

So you are going to spend your time talking to us instead of eating?
I get an hour! It’s not retail anymore. I used to work at a bike shop but a year ago, Tyler (Becca’s boyfriend) bought a house and we moved in, so I needed to make a steady income. I’m at a forklift parts warehouse and although I miss giving advice on gear and bike parts, I like staying busy all day and the lunch breaks are nice, too!

So a full time job, being an adult, racing, training…how do you find time to do it all?
A lot of freaking out and stressing out! [laughs] It’s crazy. I usually bring a bike or road bike to work with me. I’ll get off at 5 and go riding or pedaling. If I know time is going to be short, then I’ll go for a run in the morning. It’s just crazy trying to be organized with it all. The homemaking, cleaning, cooking, laundry…that can take all my time if I’m not planning it out. So I just have to be careful with priorities, I guess.

You’ve done a great job this year and you’ve really come a long way! Congratulations on your championship!
Thank you! It has been a lot of hard work but I have wanted this for a long time!

When did you first show up at a GNCC?
My first GNCC was The John Penton in 2011. That was the year it was 100°! My background is motocross so I didn’t figure I needed a Camelbak! [laughs] I had to stop every single lap for water! I was in so much pain and misery. But at the end, I said, “This thing is excellent and I’d like to keep doing it.”

Kinda strange how that works out.
Yeah, I know! I don’t know why, but I wanted to keep coming back. I had just graduated high school and figured I was going to go to college and get a career. I was coming off a big motocross injury that happened in 2010 and thought it must be time to grow up! But when I raced the Penton and got the GNCC bug, I started thinking of racing and pursuing that dream again.

When did this whole “racing dirt bikes insanity” start for you?
Oh wow…I was 7 years old when I started riding dirt bikes? I quickly became really competitive. When I was 11, I made it to Loretta Lynn’s. That was 2004. I came so close to a championship that year, but it didn’t happen. And so now, 13 years later, I’m coming full circle!

That’s really incredible! Your dedication has paid off. We have seen you rise through the WXC ranks. You’ve always been fast, but your fitness has really improved since that 100° Penton!
Yes! Well, in 2012 I decided I wanted to do the whole series. I’d always trained for MX, but with injuries, it was inconsistent. So when I dedicated myself to GNCC and knew that’s what I wanted to do, I started training really hard. I got a road bike and started pedaling with Walker [Fowler] and Johnny {Gallagher]. Hanging with those guys really changed my perspective about what I needed to do. I’ve always loved running and working out, so it just kind of took off from there.

Over the years, we have seen the whole sport elevate in terms of speed and fitness.
That’s true and it’s not just GNCC. Everybody wants to get better at what they do. You see Crossfit gyms popping up everywhere. I’m really fortunate. I get to hang with a good group of racers. Johnny hangs out some with Kailub [Russell] and gets little tips and advice. It all adds up and you have to take that good advice and run with it.

Well, you mentioned a minute ago that this championship dream has been in the making for 13 years! What advice do you have for young racers as they look up to you and want to do what you have done?
I’ve been watching and I know there are a couple girls coming through the ranks right now that have the talent and speed. If that’s what’s in your heart, then go make it happen! If you want it bad enough, then work hard for it! Hard work really does pay off! I’ve been chasing this dream for so long and I’ve wanted it so bad! It drove me and I had people around me that kept pushing even when I was tired. So don’t give up!

Speaking of not giving up, I really want to commend you on your program this year. It’s no secret that you were part of the AmPro Yamaha team for a couple years. The championship went to Kacey Martinez on an orange bike during that time. Due to internal changes, AmPro Yamaha didn’t field a female racer this year. You went out and put your own team together.
Yeah, last year was the first year for me being on a 4-stroke. It was definitely a learning year, but I was able to take that knowledge and put it to work this year. Johnny [Gallagher] and I talked during the off-season and we both had some ideas for how my program should work. With his help, we were able to put this together and pull it off!

Not only that, but you are the first non-orange bike since Mandi Mastin won back in 2009!
The reality of that is slowly setting in! I know I clinched the championship before the season ended, but I never really took time to think on it. There was always the next race and I wanted to win!

Which you did! Very decisively, by the way. You finished off with a 6-race win streak!
I’m proud of that because a lot of hard work went into it. And I did it without anyone retiring or getting injured. It was racing at it’s best! Those were all hard-fought wins. I got discouraged after Society Hills, SC where I got 4th. I didn’t perform like I felt I should at Limestone or Penton and so by Tomahawk, I was really mad! I pushed harder, focused more. Racing was the only thing on the brain! So when I won at Tomahawk, I just kept doing it that way.

Now that the season is over, what’s next?
We’ve got some things working for next year. Still too early to say, but I will be back!