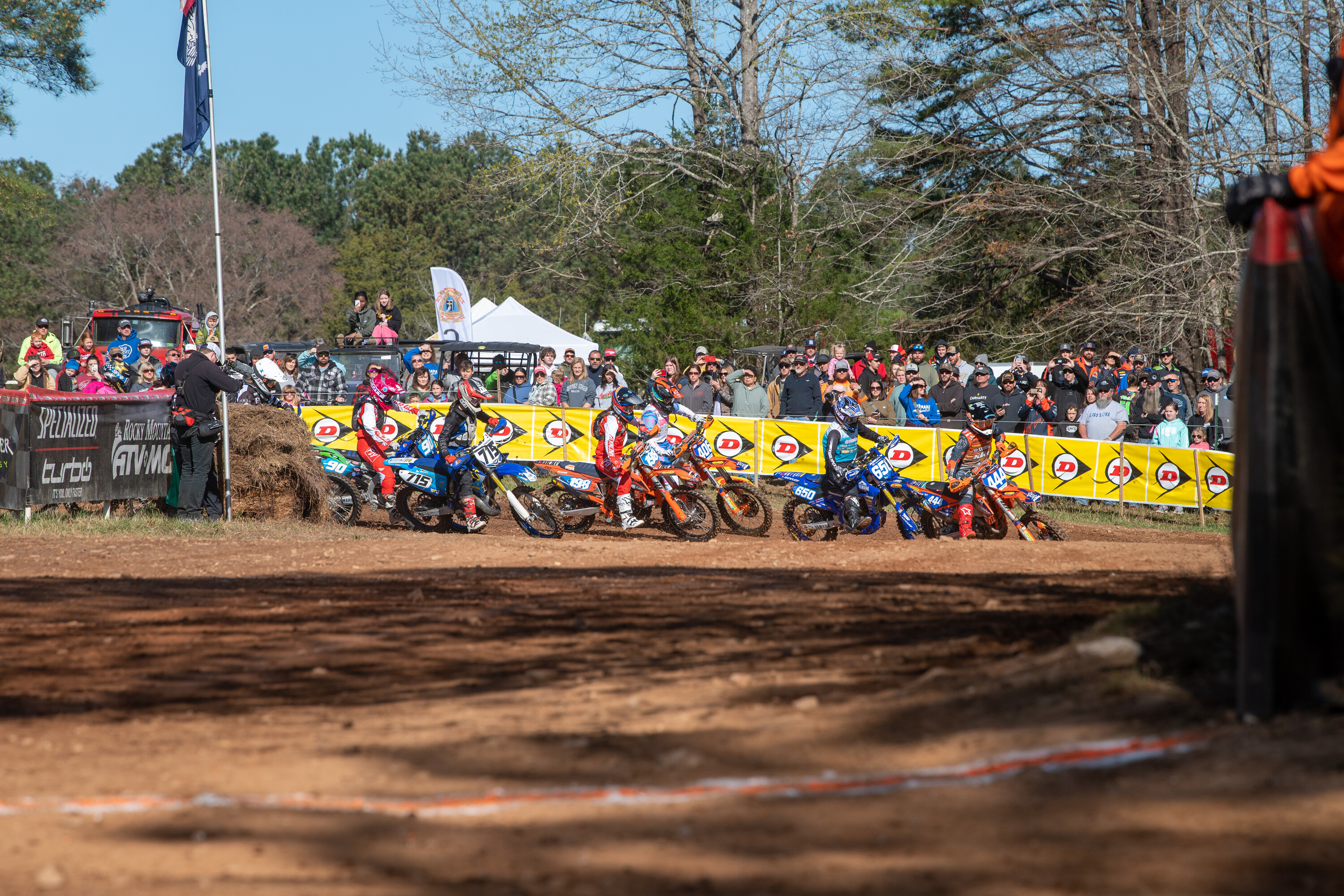 Quick Fill #3: This Week in GNCC

Time continues to tick by and now the count is down to just four weeks until the 2023 GNCC Racing season begins. On our end, we’re wide open trying to get things ready to roll out in just three weeks. Our staff here in Morgantown has all sorts of different projects going all at once ranging from getting trucks, trailers and quads ready, to getting all sorts of administrative type things taken care of and ready for a new season. Oh yeah, and we’ll have some new sweep and TV motorcycles arriving soon that will need to be prepped for the new season as well. So, we definitely know how all you racers feel who are getting your machines ready to roll as well.

There actually isn’t a whole lot of updated news since last week’s edition of Quick Fill, but we hope that this time next week we’ll have some big news to share, so stay tuned for that. So, with that said this week’s edition of Quick Fill is probably going to be a bit on the ‘quick’ side given the lack of relevant news and the fact that everyone here is just absolutely wide open. But, now is a great time to catch up on some of the silly season happenings before the season gets underway.

The ATV side is much different than the bike side since there aren’t a lot of different programs to work with. However, one interesting item regards the 2022 GNCC ATV National Champ, Brycen Neal. There actually hasn’t really been an official announcement or anything yet but word on the street is that Brycen will be making a bit of a team change. I don’t want to spoil anything before it’s official but sounds like that number one plate will be aboard the same brand, just as part of a different team. Oh, and it’s not a bad split between him and the Magna1 squad. Brycen just happened to be offered a very good deal elsewhere.

It also sounds like the Action Offroad squad is growing a little bit and will have a few different riders as part of their team in 2023. Again, I’ve yet to see anything official from anyone but there’s definitely some rumors floating around that should be a bit more solid soon.. Ya know, because we’re about to go racing in less than a month!

On the bike side, things are a lot more set for the new season and we talked about this a few weeks ago but we broke it down rider by rider. This time, we’ll go by teams and list who will be riding for who and a little additional info.

Magna1 Motorsports – Jordan Ashburn will be back with the Magna1 squad in 2023 to defend his first-even GNCC title. Now that Jordan has not only broken through for race wins but also a title, he’s coming into the new season stronger than he ever has before. Brody Johnson will be back with the Magna1 team as well. After winning the XC3 class title in 2022, Brody is jumping up to the XC2 class and could potentially be a serious contender.

Factory Husqvarna – Craig Delong and Trevor Bollinger are both back with the Factory Husqvarna squad in 2023. Craig finished a career best second place overall in 2022 and landed a total of four podium finishes. Bollinger ended up injured in the latter part of 2022 but had three podium finishes in the middle of 2022. Both of these guys could be consistent contenders throughout the 2023 season.

AmPro Yamaha – This team sees the most changes of all as basically all three of their 2022 riders are out and three new guys are in. Ricky Russell returns to the AmPro Yamaha squad in 2023 after a solid 2023 season that included two race wins and a third place overall final point standings, even with missing three races due to an injury. Also moving over to AmPro is Liam Draper who will be contesting the XC2 class once again. Liam has an XC2 class win to his credit and several podium finishes, and with the little extra support he could be a serious XC2 title threat. Also trying his first full-time GNCC effort as part of the AmPro squad will be former Pro Motocross and Supercross champion, Zach Osbourne. ZachO is basically doing this as a passion project but it will still be cool to see how he progresses throughout the year.

Factory KTM – 2021 GNCC champ, Ben Kelley, is back with the Factory KTM squad in 2023. After winning the first six rounds, Ben broke his leg at a National Enduro event and missed the last half of the season. He’s pretty much all healed up and ready to go. He’s also been a bit on the quiet side on social media, which means he very well may just pick back up where he left off. Joining the Factory KTM squad will be Johnny Girroir who will be making his full-time XC1 debut. The word through the grapevine is that Johnny is looking fast… VERY fast. So, this will be really interesting to see what happens.

Babbitt’s Kawasaki – Lyndon Snodgrass ended the 2022 season with the XC2 class title and fifth place in the overall standings. He’s back with the Kawasaki squad in 2023 to defend his XC2 title before making the jump to the XC1 class in 2024. Also back with the Kawi guys is Josh Strang. Josh suffered through an injury in 2022 but still managed to snag a race win at The John Penton before that nagging injury sidelined him for the rest of the season. It also looks like Josh is making a number switch for 2023 and running his earned number 17 instead of 114! There’s a newcomer to the Kawasaki team in the form of Grant Baylor. Yes, The International Grizzly Man of Mystery gave Cycle News an interview after months and months of social media silence and said he’ll be riding with the Babbitt’s squad in 2023… Grant is pretty quiet, always. He won the 2022 National Enduro title and didn’t even make a social media post about it, so it’s just typical Grant to break the news this way!

Phoenix Racing Honda – The Honda boys are back in 2023 and looking as strong as ever. Once again with a full effort in the XC2 class, they’ve actually added to the roster and will now have three riders gunning for that XC2 title. Ruy Barbosa returns to the team after a very solid 2022 season where he earned five XC2 podiums and ended the year third place in the XC2 class. Also back is Cody Barnes who had three XC2 podiums on his own, including a race win at The John Penton. New to the team will be Mike Witkowski, who spent the last few seasons on the AmPro Yamaha squad. Mike is no stranger to XC2 podiums and race wins and a change in pace just may give him that little bit extra he’s been looking for.

Coastal Racing GasGas – Ryder Lafferty had a stellar 2022 season winning two XC2 races and finishing the year second place in XC2 points, and also won a National Enduro overall and finished third place for the season there. He’s back with the Coastal team in 2023 and will be joined by none other than Thad Duvall. Thad is no stranger to GNCC race wins and championship contention, and a change in pace for Bad Thad just might be what he needs as well!

Factory Beta – The Factory Beta squad is back once again with no real changes. Both Evan Smith and Jonathan Johnson are back on the Italian Stallions in 2023. Both of these guys have shown some real flashes of brilliance and very well could step up even more in 2023. Keep an eye out because it’s only a matter of time until one of these guys play spoiler in that XC2 class.

Steward Baylor – By now you’ve probably already seen that Stu has put together his own KTM ride for 2023 with backing from Rocky Mountain ATV/MC and the Tely Energy guys. He’s also going to be working with Ben Nelko so these guys will have a real presence in 2023. For Stu, its back to business as usual and even after missing the majority of 2022 with injury, he proved he can still win races. Stay tuned!

Josh Toth – Josh actually will not be contesting the full GNCC series in 2023 as he moves over to a GasGas backed by Enduro Engineering. Instead, Josh will be taking a bit of a Ryan Sipes route and will be trying a lot of different events. From GNCC to Hard Enduros and some Pro Motocross, and primarily focusing on the National Enduros where he finished second overall in 2022, Josh is going to be having a lot of fun at a lot of different races in 2023.

Wow, this ending being a lot longer edition of Quick Fill than I originally thought! But, that’s going to do it for this week. Check back next week for all the latest happenings and until then, enjoy your weekend and we’ll see you back here next week!