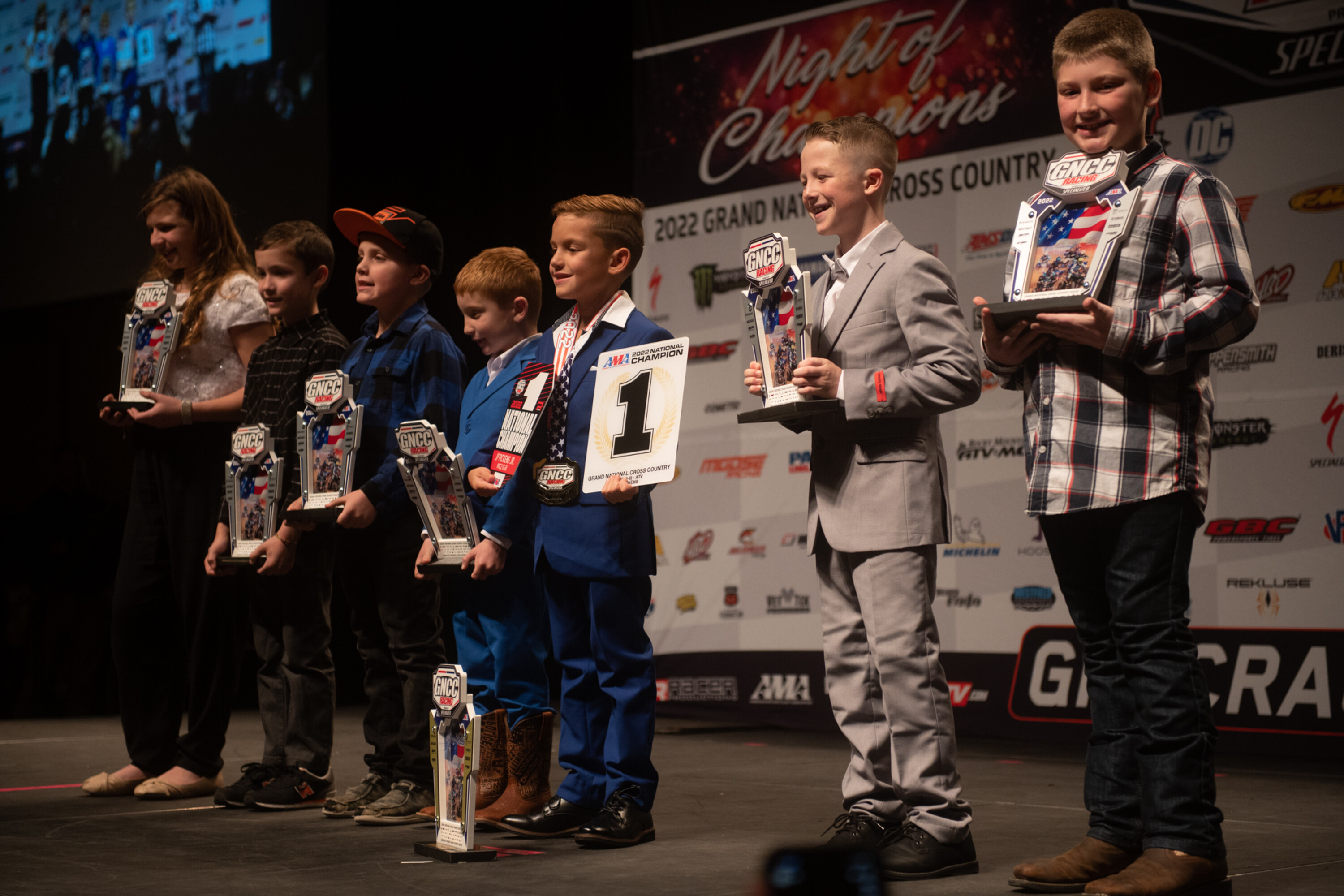 MORGANTOWN, W.Va. (December 16, 2023) – This past weekend Racer Productions, producer of the Grand National Cross Country (GNCC) Series presented by Specialized, an AMA National Championship celebrated their 2022 season in Morgantown, West Virginia at the Morgantown Marriott Banquet Hall. Over 100 National Champions were crowned, along with over 16 specialty award winners being recognized over the course of two nights.

Rocky Mountain ATV/MC returned with the Ticket to Ride giveaway, where two winners from each night were chosen at random to experience a once-in-a-lifetime opportunity, to a unique riding excursion in Moab, Utah. On Friday evening Jeremy VanFossen and Hayden Hunter were picked to attend the UTV ride with a guest of their choice. Then on Saturday it was James Bower and Taylor Johnston that were chosen to go on the motorcycle ride in Moab during the Spring.

Comeback Rider of the Year was awarded to Wesley Smith on Friday evening as he came back from a horrific accident at Tiger Run last season. Smith was life flighted from the event after his ATV landed on him. Smith not only had his facial bones crushed, but an air pocket between his skull and protective membrane on his brain. He would end up having to have surgery where they would have to rebreak bone in his face to release the optic nerve for his eye. Smith was able to comeback last season for 3 races, and then compete a full season this year where he finished runner-up in the Warrior class.

On Friday evening the Pit Crew of the Year was awarded to Mechanic Michael Segers. Not only does Segers maintain 4x4 Pro Champion Cody Collier's ATV, but he assists with numerous other amateur racers' ATVs and manages the upkeep on his own ATV that he rode to a third place position in the 4x4 A class. Then on Saturday evening, the Magna1 Motorsports crew was awarded the Pit Crew of the Year. The Magna1 team earned both XC1 ATV and Motorcycle National Championships, as well as the FMF XC3 Championship, while also helping many amateur and youth racers each weekend at the races.

On the ATV side the Manufacturer Cup would go to Yamaha Motor Corp, and on the Motorcycle side it would go to Husqvarna Motorcycles. Sponsor of the Year was awarded to GBC Powersports Tires on Friday night. GBC has continued to support the series and racers. They stepped up, holding the title sponsor of the Burr Oak GNCC event for the past two years, while also supporting the Moto Hero awards at each round. GBC supplied a set of free Kanati Truck Tires to each Moto Hero during the season.

During the ATV and eMTB celebrations, the series and racers also congratulated Johnny Gallagher and Charlie Mullins on their retirement from professional racing. On Friday and Saturday series celebrated Mr. “Tennnn Seconds” himself, Rodney Tomblin, as he steps down from announcing the series full-time.

The 2023 Grand National Cross Country (GNCC) Series presented by Specialized, kicks off on February 18-19 in Union, South Carolina with Round 1 – Big Buck GNCC. For the full 2023 schedule, click HERE.

The Grand National Cross Country Series presented by Specialized is the World’s premier off-road racing series. Founded in 1975, the 12-round motorcycle and ATV championship and 9-round eMTB championship, is produced exclusively by Racer Productions. Cross-country racing is one of the most physically demanding sports in the world. The grueling two and three-hour GNCC races lead as many as 2,700 riders through racetracks ranging in length from eight to 12 miles. With varied terrain, including hills, woods, mud, dirt, rocks, and motocross sections, GNCC events are tests of both survival and speed. The series draws talent from all over the U.S., Central America, South America, Europe, Japan, Australia and New Zealand. GNCC Racing is televised live on RacerTV.com. For more information, please visit www.gnccracing.com.