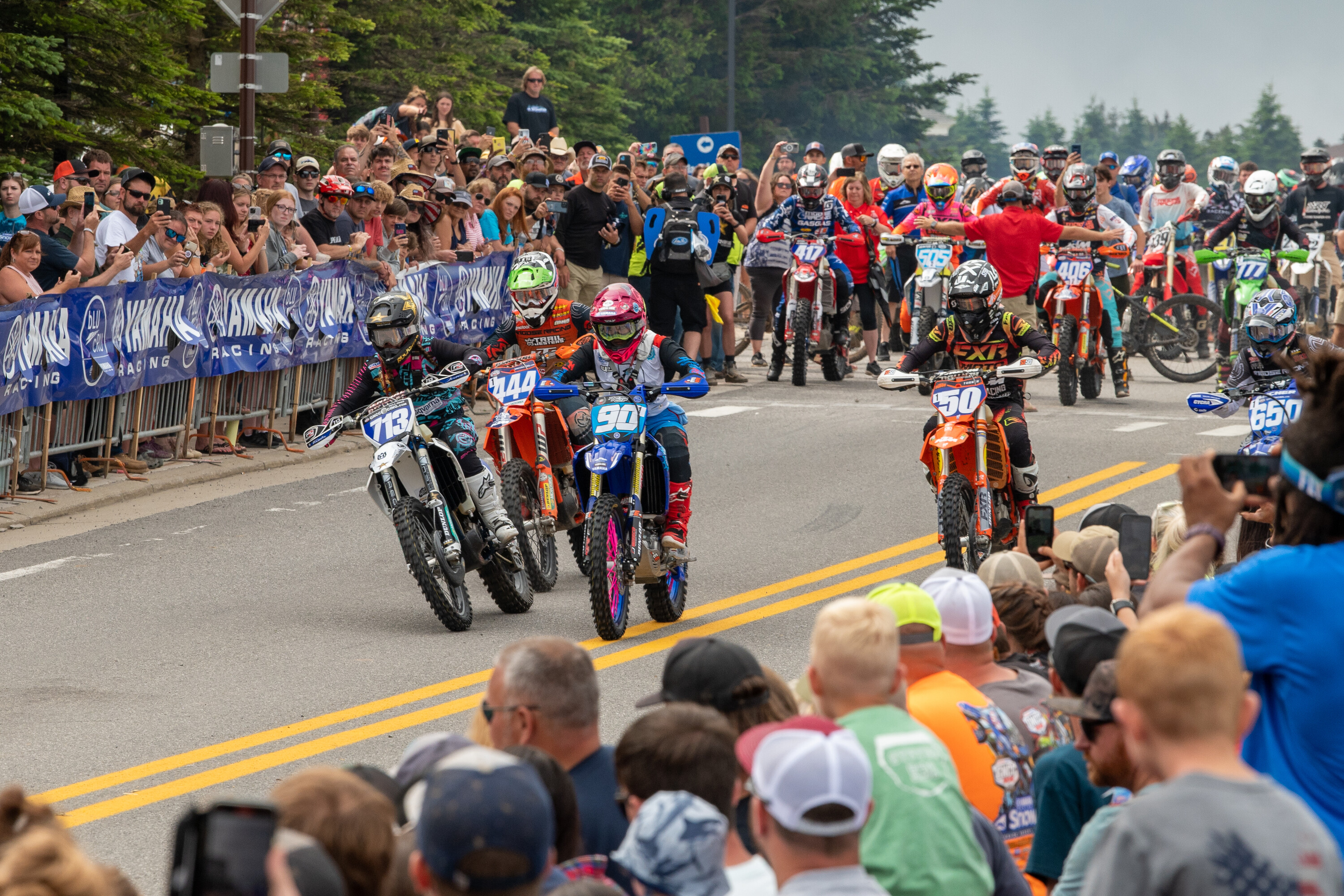 The GNCC summer break continues to roll right along with another week in the books. While there might be a summer break, there are still a number of folks continuing to stay busy with various events through the summer. As I mentioned last week, this is also the case on our end and this week our office is wide open with preparations for the Monster Energy AMA Amateur National Motocross Championship at Loretta Lynn’s, which kicks off August first. That’s now less than three weeks away, so needless to say things are a bit hectic here.

On top of that, a few of us are also focused on Pro Motocross with the Spring Creek round happening this weekend in Minnesota, which comes on the heels of the Southwick round taking place last weekend and RedBud the week before that, so that’s an easy way to stay busy as well. Now, I mentioned there’s a number of GNCC regulars who are staying busy across the board and last weekend was basically full of this kind of action.

TrailPros, who organizes the US Sprint Enduro series organized their first-ever Sprint Enduro World Championship in Virginia with Josh Toth taking the win, and this comes after Josh wrapped up the US Sprint Enduro title a few weeks ago. Second place went to Kailub Russell who came out to get in some training for the ISDE, which he’ll be participating in this year, while Liam Draper rode to a solid third place finish. Craig Delong and Cody Barnes both rounded out the top five, respectively.

Now, this is interesting to see as these top five guys are all competing in this year’s ISDE. It was announced a few weeks ago that this year’s US World Trophy team will include Kailub Russell, Josh Toth, Layne Michael and Dante Oliveira while the US Junior Trophy Team consists of Cody Barnes, Mateo Oliveira and Austin Walton. The Women’s Trophy Team will include Korie Steede, Rachel Gutish and Brandy Richards. Craig Delong will be riding as part of the XCGear Club Team along with Thorn Devlin and Kai Aiello, which very well could be one of the strongest club teams of the entire event!

This year’s ISDE will take place August 29th through September 3rd in Le Puy en Velay, France which is in the southern part of the country near the Swiss border. This should be similar terrain to the east coast of the US, so the GNCC regulars should be pretty strong but never count out the French riders, especially on their home turf, and of course the Spanish and Australian teams always really, really good no matter what.

Backing up to Loretta Lynn’s, there’s always a number of familiar GNCC names who take place in the event and this year will be no different. The entry process closed earlier this week, but I actually wrote this week’s edition on Tuesday as I’m flying to Minnesota for Pro Motocross Wednesday and will be at the Spring Creek facility all day Thursday when this goes live, but we should have all the entries set and ready to go next week, so we’ll run through and let you know who to keep an eye on and what class they’ll be racing.

In last week’s edition of Quick Fill I mentioned that we would begin breaking down some of the championship battles in various classes. This week we’ll take a look at a few of the premier classes and begin breaking down amateur classes in the coming weeks. First up, we’ll take a look at the 4x4 Pro class which will ultimately have a new champion for 2022. After claiming the 4x4 Pro title from 2019-2021, Landon Wolfe decided to bow out of full-time competition in 2022 and instead just make select rounds. This has left the door wide open for a new championship contender and thus far it’s Cody Collier leading the charge.

Cody holds a six-point lead over Haedyn Mickelson while Brandon Frazier sits third and also within a reasonable striking distance at 15-points out of first place. Even on a part-time schedule, Landon Wolfe holds the fourth-place spot while Burke Marsiglia rounds out the top five. Collier holds the most wins so far this season with a total of five, but one DNF and a seventh-place finish have hindered him from pulling out a larger lead. Mickelson jumped off to a great start by claiming a win at round one, which he proved was no fluke as he would win again at Camp Coker. Coming as no huge surprise, Brandon Frazier took the win at round two in his home state of Florida, while Landon Wolfe took the most recent win at Snowshoe.

Moving over to the WXC ATV class, defending champion Hannah Hunter is once again doing what she needs to claim her third straight WXC title. With five wins so far in 2022, Hurricane Hannah holds a 17-point lead over The WXC GOAT herself, Traci Pickens who has been incredibly consistent so far in 2022. While Pickens hasn’t snagged a class win yet this season, she has only finished off the podium one time, and even that was still a solid fifth place finish. Jessica Elioff holds the third-place position and has actually claimed two race wins of her own along with four additional podium finishes.

Currently sitting fourth is Katelyn Osburn who also has two wins to her credit in 2022 while Taylor McClish rounds out the top five. All of these ladies have ridden incredibly well in 2022 and in addition to the aforementioned names holding the top five spots, Morgan Solesbee, Andrea Rodgers and Angel MaGee have all landed on the WXC podium at various times while others such as Emily Wise, Jaida Phillips and Karlie Martin have been inside the top five multiple times while challenging for podiums of their own.

In the XC2 ATV class, Jay Shadron has been dominating thus far winning eight of nine rounds. Shadron holds a 56-point lead over second place rider, Wyatt Wilkin with Steve Harrell sitting in third, an additional 20-points back. Wilkin has been a consistent podium contender as he has not finished off the XC2 podium yet this season. Harrell has five podium finishes to his credit as well and actually has not finished worse than fourth place yet in 2022. Branden Owens sits in fourth place and is actually the only rider to best Shadron for a race win so far in 2022 and has three additional second place finishes. However, Owens has also had a string of bad luck with a number of eighth and ninth place finishes to his credit as well. Rounding out the top five of the XC2 is Dylan Walraven who has consistently been a top five finisher thus far this season.

Moving onto the bike side, the hunt for the WXC title has really heated up for 2022 with a multi-rider battle for the WXC National Championship. Currently Tayla Jones leads the way but she only sits two-points ahead of second place rider, Korie Steede while Rachael Archer holds the third place spot a mere seven points behind Steede and nine-points out of first place. Jones has the most wins so far in 2022 with a total of four wins compared to three wins by Archer and two wins from Steede. They each have been very consistent as well with Jones never finishing outside the top five yet this season, Steede never finishing worse than fourth and Archer consistently on the podium minus two rounds where she suffered freak mechanical issues leaving her outside the top five.

Of course, these ladies also have other contenders looking to sneak in and challenge for podiums of their own. Prestin Raines holds the fourth place spot with a total of four top five finishes and Shelby Turner rounding out the top five with a slew of fourth place finishes and a second place finish at Snowshoe. In addition to those podium regulars, these ladies and other favorites such as Rachel Gutish and Mackenzie Tricker, who have both battled through injuries this season, will all be looking to challenge for podiums and race wins of their own in the final four rounds of the season.

As for the XC3 class, it’s actually 2020 XC3 class champion Zack Hayes who leads the points charge into the 2022 summer break. Zack has been incredibly consistent never finishing off the podium through the first nine rounds and while he’s only claimed one win so far, seven second place finishes and one third place finish have helped give him a ten-point lead in the championship battle. That lead comes over Brody Johnson who has an impressive six wins so far in 2022 but Brody also has three rounds where he finished outside the top five with 11th, 10th and 6th place finishes that have ultimately kept him out of the points lead. Jake Froman has a race win of his own and sits third place in XC3 points while Hunter Nuewirth and Max Fernandez round out the top five.

That’s actually going to do it for this week’s edition of Quick Fill. As mentioned, we’ll continue breaking down some championship battles in the coming weeks and also give you an update on familiar GNCC names taking part in Loretta Lynn’s this year. Until then, enjoy your weekend and we’ll see you back here next week!