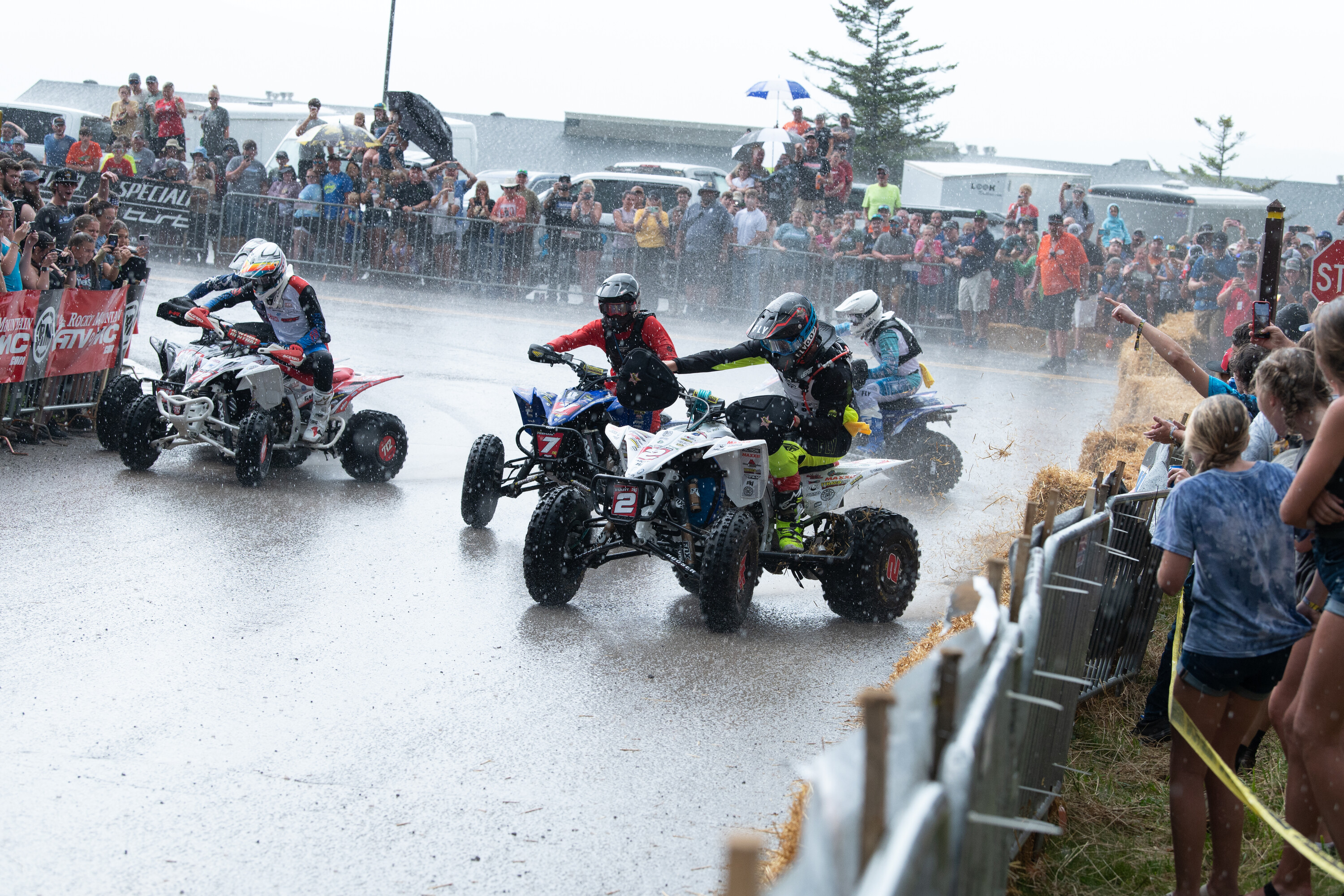 The GNCC summer break is officially here with a tough and grueling Snowshoe event in the books. This year things became a little more tough and grueling at times as a few rain showers fell on the facility throughout the race weekend that would add yet another challenge. However, the show went on and with Snowshoe now in the rear-view mirror, things will begin to slow down just a hair as we head into summer break.

As usual, its always interesting to take a look at how things are shaping up when it comes to championship battles when the summer break begins. With just four rounds remaining this fall, many riders take this time off as an opportunity to look at the bigger picture and see what needs to be done in a championship quest. Both the ATV and bike championships have really become very heated in the last few rounds, and these will likely continue to be close when we get back to racing in September.

On the ATV side, Brycen Neal has been a man on a mission this year. After winning the opening round, Brycen landed two more podium finishes in the next two rounds with defending champ Walker Fowler claiming his first two wins of the season. However, Neal would then begin a dominating run starting at round four that would lead him to five consecutive wins and a healthy points lead. Additionally, Fowler suffered a freak mechanical issue at The John Penton which left him finishing outside the top 20 and scoring zero points.

Just as Neal began to pull out a large lead in the points, he would suffer his own mechanical issue just one mile into the Snowshoe event which left him scoring no points. With Fowler taking this win, this tightens that lead back up as Neal now sits just 11-points ahead of Fowler. These two have been the only riders to claim wins thus far in 2022, and each will be looking to excel in the final four rounds but at the same time there are a number of other riders looking to topple them for their own race wins.

Hunter Hart sits third place in points and actually has a pair for second place finishes so far this season and is a former race winner himself. Fourth place is held by John Glauda Jr, who has a podium to his credit in 2022 and will ultimately be looking for more in the fall, while Devon Feehan has put together one of his best seasons yet sitting fifth place with two podiums in 2022. Additionally, these guys have other former race winners such as Cole Richardson, Jarrod McClure and of course Adam McGill to contend with as well. This means these final four rounds could be chock full of talent contending for race wins and podiums of their own.

On the bike side, we saw a first-time race winner at Snowshoe in the form of Jordan Ashburn. At this point Ashburn is one of the more veteran XC1 riders and has a slew of XC1 podiums to his credit, but that illusive win had always seemed to just slip between Jordan’s fingertips. That changed at Snowshoe and now that he finally has that first win under his belt, it’s not impossible to see him go on a tear as he just might be more motivated than ever.

A big part of that motivation could come from the fact that Ashburn now controls the points lead in the hunt for the GNCC National Championship. With Ben Kelley still sidelined and no solid information on when we may see him return to competition, this is definitely a huge opportunity for Ashburn to step up and take control from here on out. Of course, he still has his work cut out for himself as there are a number of top contenders still remaining and more that are expected to return after the summer break.

Kelley still sits second in the series points just seven-points behind Ashburn, while Trevor Bollinger sits third. Bollinger led a good portion of the Mason-Dixon GNCC and appeared to be on his way to his first overall win but actually ended up breaking a bone in his hand. He suffered through the Snowshoe round ultimately ended up 11th overall. With some time off to heal, Bollinger has a shot to come back strong and pick up where he left off at Mason-Dixon. There’s also XC1 rookie, Craig Delong who has shown some real flashes of greatness in 2022 and really has the potential to land more podiums and even contend for a race win of his own. Delong has always been incredibly consistent and will be looking to continue that in the final four rounds.

You also can’t count out Grant Baylor. Grant is one of those guys that seem to do better as the race wears on and seemingly comes out of nowhere to run in podium contention. Josh Toth is another rider who has shown some real potential in 2022, but a few freak issues have hindered his results. When Toth is able to put everything together, he’s another rider that just may sneak in for his first-ever overall win as well. And of course, there’s Josh Strang. After an arm injury at round two, Strang missed several events but rebounded with a win at The John Penton before that injury began nagging at him forcing him to eventually sit out the Snowshoe round. He’s yet another to keep an eye on in the final rounds as he’ll be looking to rebound yet again and contend for race wins.

The XC2 bike class has a bit of a championship battle shaping up as well. Lyndon Snodgrass does have a fairly comfortable lead but he suffered a mechanical issue at Snowshoe which left him finishing 15th in the XC2 class. Ryder Lafferty has really come alive in 2022 and with two XC2 class wins, has now pulled within 23-points of Snodgrass. Additionally, Lafferty leads the AMA National Enduro Series so the young guy out of New Jersey has really stepped up his game this season and is looking incredibly strong.

Of course, there’s still a long summer break standing between us and a return to racing. If you’re new to GNCC or just simply don’t know the behind-the-scenes workings, the GNCC summer break is a long-standing tradition for several reasons. Not only do we take a summer break because, well, it’s just too hot to race for two or three hours but also because our staff stays incredibly busy through the summer. The same company who organizes the entire GNCC series also organizes the entire Loretta Lynn’s Amateur National Motocross Championship each year, and on top of that we’re also the administrative organizers of the Pro Motocross Championship.

What does this mean? Well, for example when Snowshoe came to a close the track crew stayed through Tuesday evening getting the place cleaned up and reclaimed, then a few of us turned around and headed to Michigan on Wednesday afternoon for the RedBud National. This weekend some of us are off to Southwick, then to Spring Creek for more Pro Motocross while others are preparing equipment and vehicles to head to Loretta Lynn’s in just a few weeks. Once Loretta Lynn’s is in the books, some stay behind to run the ATV Motocross event at Loretta Lynn’s while others head to Unadilla, then Budds Creek, for more Pro Motocross. Pretty much everyone on our regular staff will end up at Ironman for Pro Motocross and some of us will head out to California for the Pro Motocross finale at Pala, which is just a week before we return to GNCC Racing.

As you can see, this summer break is anything but a break for many but it’s well worth the effort! That’s going to do it for this week’s edition of Quick Fill. Check back next week and we’ll start breaking down some championship battles in other classes. Until then, enjoy your weekend and we’ll see you back here next week!