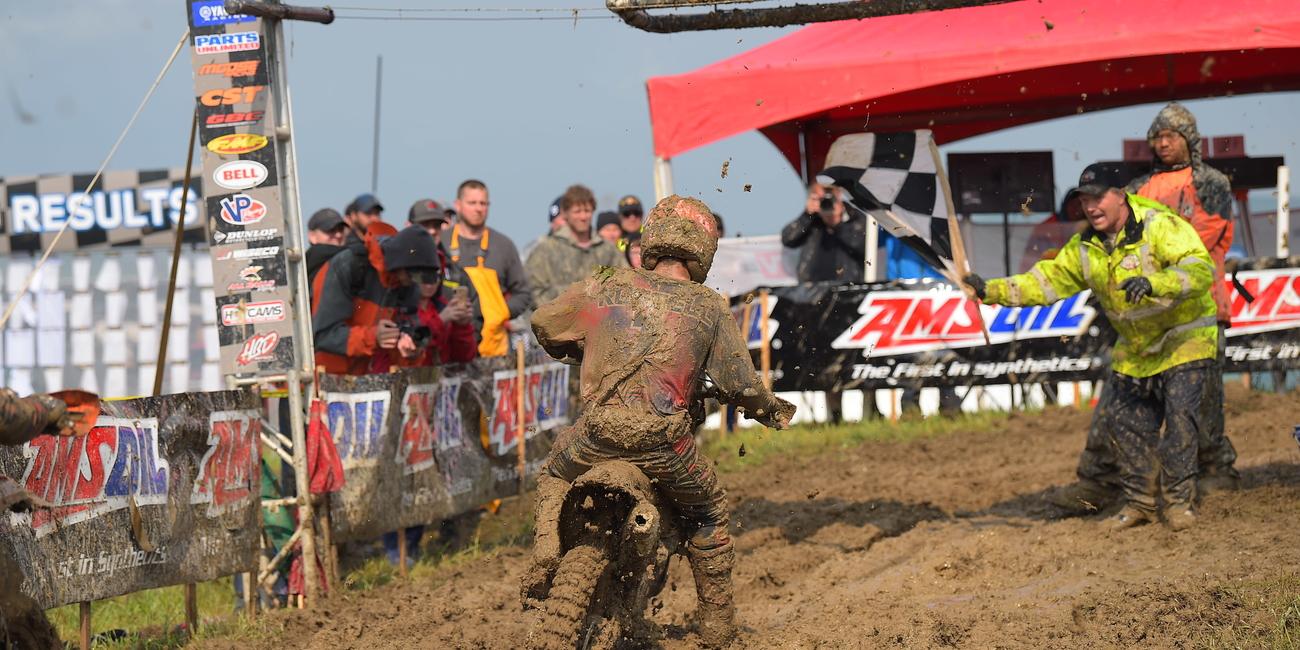 However, that win did not come easy for Russell as he swapped the lead position several times with fellow XC1 Pro competitor, Rockstar Energy/Factory Husqvarna Racing’s Thad Duvall. As the duo continued to make their way through the treacherous course, Duvall would find himself in the lead as the two-lap card was out.

After a long pit stop, Russell was back in the lead when the white flag came out indicating one more lap to go. Duvall would come through 31 seconds behind Russell, but you could tell Duvall was on a mission to battle for the overall win. As the anticipation grew, everyone’s eyes were on the road crossing after the pro pit section. Russell would cross back over the road first, but Duvall was gaining on him. With only two-miles separating them, Russell would make his way through a small section of the woods and out to the finish line 16 seconds ahead of Duvall to earn his 58th career overall bike win.

Another rider out there having one of his best races of the season was Trail Jesters KTM’s Ben Kelley. The XC2 defending champion, and current points leader in the class, found himself leading the overall on adjusted time as they came around on the opening lap. However, as the rain fell and track conditions worsened Kelley’s times fell a bit. That didn’t stop Kelley from pushing though, he managed to work his way up to third overall physically and take a commanding lead over his fellow XC2 250 Pro competitors. Kelley went on to earn his seventh-straight XC2 class win, and his first overall podium appearance of the year.

Tely Energy Racing/KTM’s Steward Baylor Jr. worked his way through the pack to third in the XC1 Open Pro class after a dead last start. Baylor had his work cut out for him as he made his way around on the opening lap in 12th place. By the time the race hit the halfway point, Baylor was up to ninth and was still charging forward. As the white flag flew, Baylor was up to fourth and had set his sights on third. When he came to the checkered he had captured third in the XC1 Open Pro class.

Running at the front of the pack early on in the race was Rockstar Energy/Factory Husqvarna Racing’s Trevor Bollinger. When the first couple riders came through timing and scoring, Bollinger was right with Russell and Duvall. Bollinger was even able to make it up to second at one point in the race, but would unfortunately fall back to fourth by the time the checkered flag flew.

AmPro Yamaha/Moose Racing/Parts Unlimited’s Ricky Russell came through fifth in the XC1 class and sixth overall. Russell has been steadily working his way back and is looking more and more like himself each race. Russell was running fourth at one point in the race, but a lapper in front of him who got stuck cost him some time.

Earning best finish of the season was Husqvarna/FXR/Thornhill Automotive’s Cory Buttrick with a sixth in XC1 and eighth overall. Buttrick was a fill-in rider for Russell at the beginning of the year, but is now back to his Husqvarna. Buttrick has been improving each round and is aiming to break into that top five soon.

Coming through seventh in his class was FMF/KTM Factory Racing’s Josh Toth. Toth has had a rollercoaster kind of season so far. After some fifth place finishes and then a 12th at the Camp Coker Bullet due to a crash, Toth earned his first podium at X-Factor and has now looked at a sixth and seventh place finish at the previous two rounds.

Phoenix Honda Racing’s Andrew Delong earned another top 10 in the XC1 class with an eighth place finish. Delong has been having a great season thus far in the year, and is currently ranked seventh in the points standings.

The Babbitt’s Online/Monster Energy/Kawasaki duo of Josh Strang and Jordan Ashburn did not have the greatest day at the Tomahawk GNCC. Ashburn was only able to complete one lap, where he was sitting fourth, before returning to his pits. Strang unfortunately was running fifth and fell back as far as 10th place before returning to ninth in XC1 where he would remain for the last four laps of the race.

Returning to race in his second GNCC event was KTM/IMS/FMF’s Lyndon Snodgrass from Australia. Snodgrass was running eighth before a couple crashes cost him some positions. Snodgrass would end up finishing 10th in the XC1 Open Pro class in New York.

Coming through second in the XC2 250 Pro class was Coastal Racing/Husqvarna’s Craig Delong. Delong would get off to a great start, coming through second. Delong put in a good ride; however, he was unable to catch Kelley to battle for the lead. As the race wore on, Delong would find himself sitting second for the duration of the race and coming across the finish to the checkered flag in that position.

Beta USA Factory Racing’s Mike Witkowski started out with a great third place position on the opening lap, however Witkowski would battle throughout the day with various XC2 250 Pro competitors. On the last lap Witkowski would make a pass from fourth to take over third once again. This was Witkowski’s fourth podium in the XC2 class this year.

The FMF XC3 125 Pro-Am class saw a familiar face pop up once again, Nick Davis came out to race at what is considered one of the closest GNCC’s to his hometown. Davis had his work cut out for him as Trail Jesters KTM’s Jesse Ansley grabbed the holeshot and took off. The two would swap positions, but Davis would get the win with Ansley coming in second. Beta USA Factory Racing’s Cody Barnes came away with a third place finish even after a rock coming off Davis’ back tire knocked him in the nose causing it to bleed and making breathing difficult.

As the 10 a.m. race started the rain had held off and sun had begun to shine, Rockstar Energy/Husqvarna/Moose Racing/Shaw Wines’ Tayla Jones set her sights son a WXC win in New York. Fly/Maxxis/Pro Circuit/KTM’s Becca Sheets was right behind her ready to strike if a mistake was made. Unfortunately for Sheets, Jones built up a bit of a gap and took her fifth win of the season. Sheets would come through in second and AmPro Yamaha’s Rachael Archer would once again land on the WXC podium in third.

The overall standings saw 125 B/C rider Lucas Grounds landing third overall behind Jones and Sheets. In the Sportsman A class Randall Ervin took first, with Sam Williams and Sean Solek in third.

There was some exciting racing happening in the 8 a.m. youth race with Joseph Cunningham, Brayden Nolette and Canon Kuneff. As the race got started it was Kuneff getting the early lead until the group came through on the third lap and Cunningham had taken over the top spot followed by Nolette. Cunningham and Nolette would swap the lead position a couple times, but as the checkered flag flew it was Cunningham continuing his win streak in the YXC1 Super Mini Sr. class and as the youth overall winner. Nolette would finish second, just 1.45 seconds behind Cunningham. Payton Gwynn made his first appearance on the overall and YXC1 Super Mini Sr. class podium as he came through in third. Jack Joy took the YXC2 Super Mini Jr. class win followed by Cooper Jones and Garyson Smith taking third.

Your Tomahawk GNCC AMSOIL Moto Hero, who was nominated by four different family members and friends and chosen out of 20 different nominations for this event, was awarded to Todd Squire. He hails from Statesboro, Georgia and is the father of Genna Squire who races in the Women’s bike class. Todd is a retired Army Veteran who served as an Airborne Combat Ranger. He served in two combat tours, the first being in the Persian Gulf and the second in Desert Storm. His daughter was one of the ones who nominated him saying that she wants him to know that he is the bravest man she knows, and just wanted to thank him for everything he has sacrificed in his life for her. Todd received a $250 AMSOIL Shopping Spree and Four (4) Kanati light truck tires from GBC Tires as a gesture of gratitude for his service.

The 1 p.m. Bike Pro race was broadcast LIVE in its entirety on RacerTV.com and can be viewed as archived video online by visiting the GNCC LIVE page online. A highlight show featuring the event will air on NBC Sports Network on Saturday, August 31 at 3:30 p.m. ET.