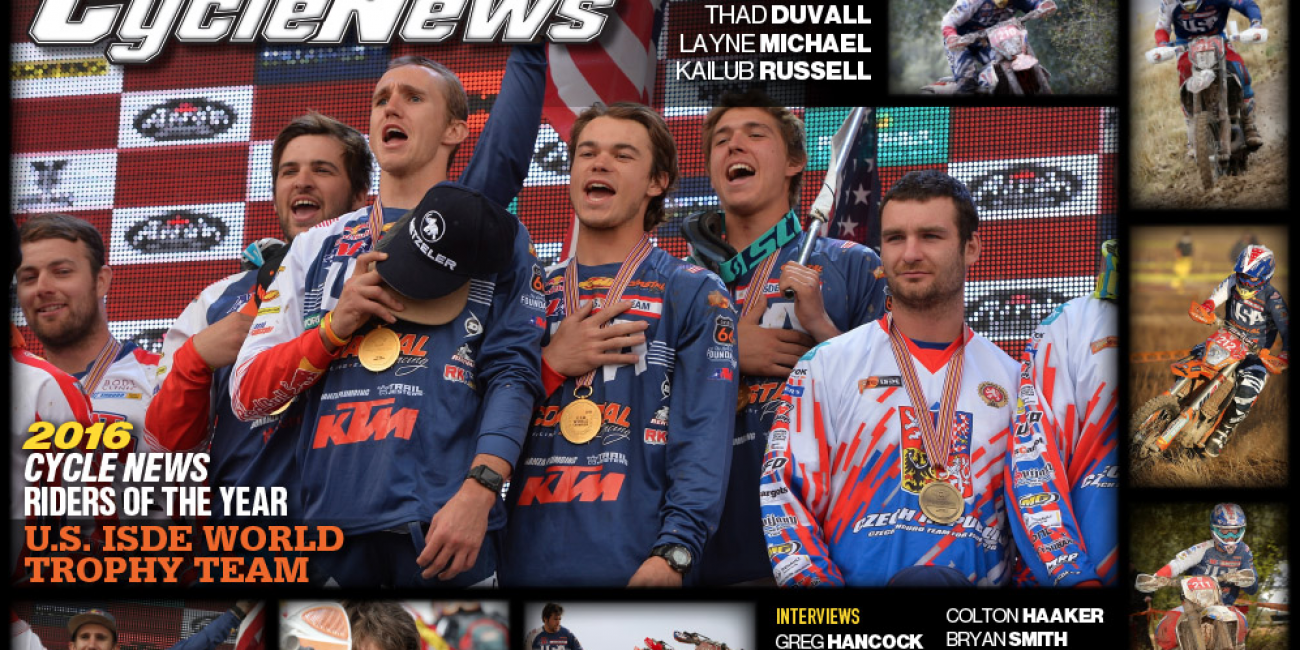 The award, historically presented to one individual rider, was altered to reflect the historic accomplishment of the four-man U.S. World Trophy Team who took home overall gold at the 91st running of the International Six Days Enduro (ISDE). The six-day long race took place October 11-16 in Navarra, Spain. The victory signified a major win not only for the racers, but the entire United States, as they became the first U.S. World Trophy team to win the ISDE World Trophy.

“The 2016 U.S. World Trophy Team is the true definition of teamwork,” said Event Director Tim Cotter. “We saw Kailub Russell and Thad Duvall battling for the overall win at the Powerline Park GNCC the day before they flew to Spain, and then they came together with XC2 racer Layne Michael to help win the ISDE World Trophy for our country. The entire team is more than deserving of this award from Cycle News, and we are especially proud of Russell, Duvall and Michael.”

The team was tested both physically and mentally during the six days, but continued to join together to create success in what is known as the “olympics of off-road racing.” Not only did the U.S. World Trophy Team capture the overall win, but team member FMF/KTM Factory Racing’s Taylor Robert earned the 2016 Individual ISDE Overall, only the second American rider to ever claim this prestigious honor. Robert is known for his success in the World Enduro scene.

To see the Russell, Duvall and Michael in action check out the 2017 AMSOIL GNCC Series which kicks off March 5 and 6 in Union, South Carolina with the VP Racing Fuels Big Buck GNCC. To view the full13-round schedule click HERE.

The AMSOIL Grand National Cross Country Series presented by Maxxis is America's premier off-road racing series. Founded in 1975, the 13-round championship is produced exclusively by Racer Productions. Cross-country racing is one of the most physically demanding sports in the world. The grueling three-hour GNCC races lead as many as 2,400 riders through tracks ranging in length from eight to 12 miles. With varied terrain, including hills, woods, mud, dirt, rocks and motocross sections, GNCC events are tests of both survival and speed. The series draws talent from all over the U.S., Central America, South America, Europe, Japan, Australia and New Zealand. GNCC Racing is televised weekly on NBC Sports and RacerTV.com. For more information, please visit www.gnccracing.com.