It's been a long season and the last race of the season has arrived. I always like coming to the Ironman; it's a great area and the town of Crawfordsville is full of diehard race fans - rain or shine. Unfortunately, it was cold and rainy, but that didn't stop a huge crowd from showing up to enjoy the races and displays. I arrived early on Friday to display my bikes and sign posters at the local National Guard Armory just a mile or so from the track. SGT Such and SSG Lillard worked the display and talked to potential recruits while giving out hats and shirts. The track looked like it was going to be perfect, but some heavy showers moved in overnight to make things pretty messy.

Mark and I prepared for a mud race. The worst part was just getting over to the start area through a deep muddy field. The actual track was not too bad, and looked like it was going to be wet but fast. My bike had been starting great this year, but as I was practicing some practice starts just before the race, it started acting up and did not want to start quickly. Everyone shut their engines off and we waited for the 10 second signal; I hoped it would start. The flag dropped and everyone roared toward turn one in a sea of mud, except for me. I kicked and kicked but nothing happened. It finally started after the pack was around a few turns. I caught up to the tail end of the pros just as we headed into the woods.

The first lap was just what you would expect-terrible! I was getting in jams and eating mud big time while trying to make something happen. I stopped for fresh goggles and ended up in 17th at the end of lap one. My bike was actually working well once I got going, but staring so far behind made me take a lot of chances; some worked and some didn't. I worked my way up to 12th at the finish, right behind Kiser; we had a good battle that last lap. Congratulations to Chris Borich for the win, and to Bill Ballance for yet another Championship.

Mark Notman got a good start in the XC2 Pro Am class in 4th place. He battled for 3rd the entire first lap, and passed about five XC1 Pros in the process. He hooked up with Brandon Ballance and moved into 2nd place on lap 2. On the last lap, he was within 24 seconds of the leader and was closing in. He caught the leader at Ironman Hill, but got hung up in the creek at the bottom. Mark lost about a minute and was now in 3rd. He charged hard and passed for 2nd about 2 miles out and held on for the finish. Another podium and 17th Overall - Great job!

The Yokley Racing National Guard team had a good year. I finished 8th in the XC1 Pro Class and Mark finished 2nd in the XC2 Pro Am Class and 17th Overall. We are excited about the off season and switching to the new Polaris 450 MXR. I can't wait for next season to start! We intend to get on the new bikes soon and begin getting them dialed in for 2009. I'll keep you posted as our testing progresses, and we will be running local and regional race series throughout the winter. I want to thank all our sponsors for their support this year; none of this would have been possible without them. See you next year! 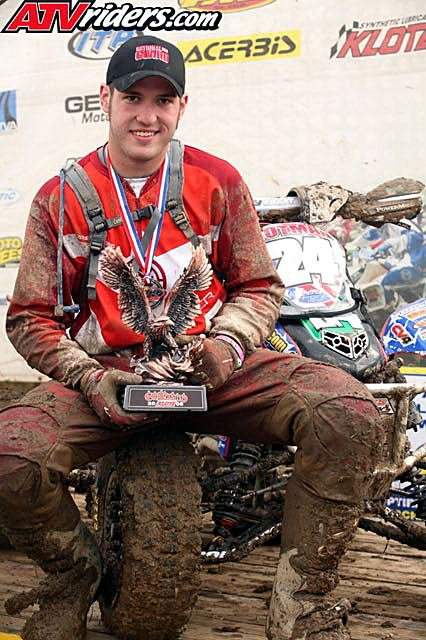 Mark on the podium at the Ironman

Today was Round 4 of the GNCC UTV Race Series in St. Crawfordsville, IN.  The final GNCC UTV race drew the largest field of the year and this series seems to really be catching on in popularity.  I was leading in the points coming into this event, and if I could have a strong finish, I could wrap up the National Title.  The four mile course was a little longer than normal which made for a little less traffic and fewer jams.  The course consisted of some high speed open field sections, some tight woods, some creek crossings and hills.  I was honored to have COL Ron Turner as my passenger today.  COL Turner is the Chief of Staff in KY and has been instrumental in building the Yokley Racing - National Guard relationship; this would be his first ride in the Polaris RZR.

Our first task was getting his 6' 5”Ã frame to fit into the cockpit comfortably.  We let the safety belts out and got him in OK, but his head was right up against the top of the roll cage.  I could see that it was going to be a battle between his helmet and the cage during the race!  We headed to the starting line in a large, recently harvested corn field.  I had gotten the hole shot in every UTV race this year, so I had confidence that we could do it again.  Whoops!  Our machine did not fire immediately, and we were at the back of the field as we headed through the first several corners.  We banged around and worked our way up to 7th at the end of the first lap.  On lap 2, we were third, but about 40 seconds behind the leader.  We hammered away and were able to catch up and to take the lead with 3 laps remaining.  Our day was not without some mayhem as we did get hung up a few times with some fellow racers.  When we finished, the passenger side panel was completely ripped off; neither of us knew when that happened!

It was a great day and COL Turner had fun in his first experience in the RZR.  On the podium, he commented how he was now hooked on this type of racing, and referred to me as a “Maniac”Ã and “Wildman”Ã ; I'm not quite sure what he meant by that!  If yelling was any indication of how much he enjoyed the ride, he had a ball!

I want to congratulate Jarrett Stephens and Shane Turner for finishing second and running real strong; they led the race for quite a while.  I also want to thank Polaris for providing me with the best machine out there and the Army National Guard for supporting me this year.  All my sponsors listed below contributed to the success of our team this year, and for that I am deeply grateful.  We now take a little break and start getting ready for next season.  See you there! 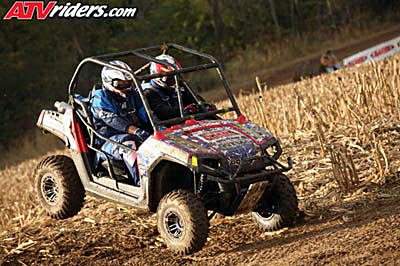 Standing the RZR on its nose at 60 MPH 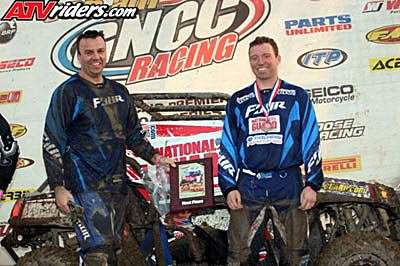 COL Ron Turner and William on the podium