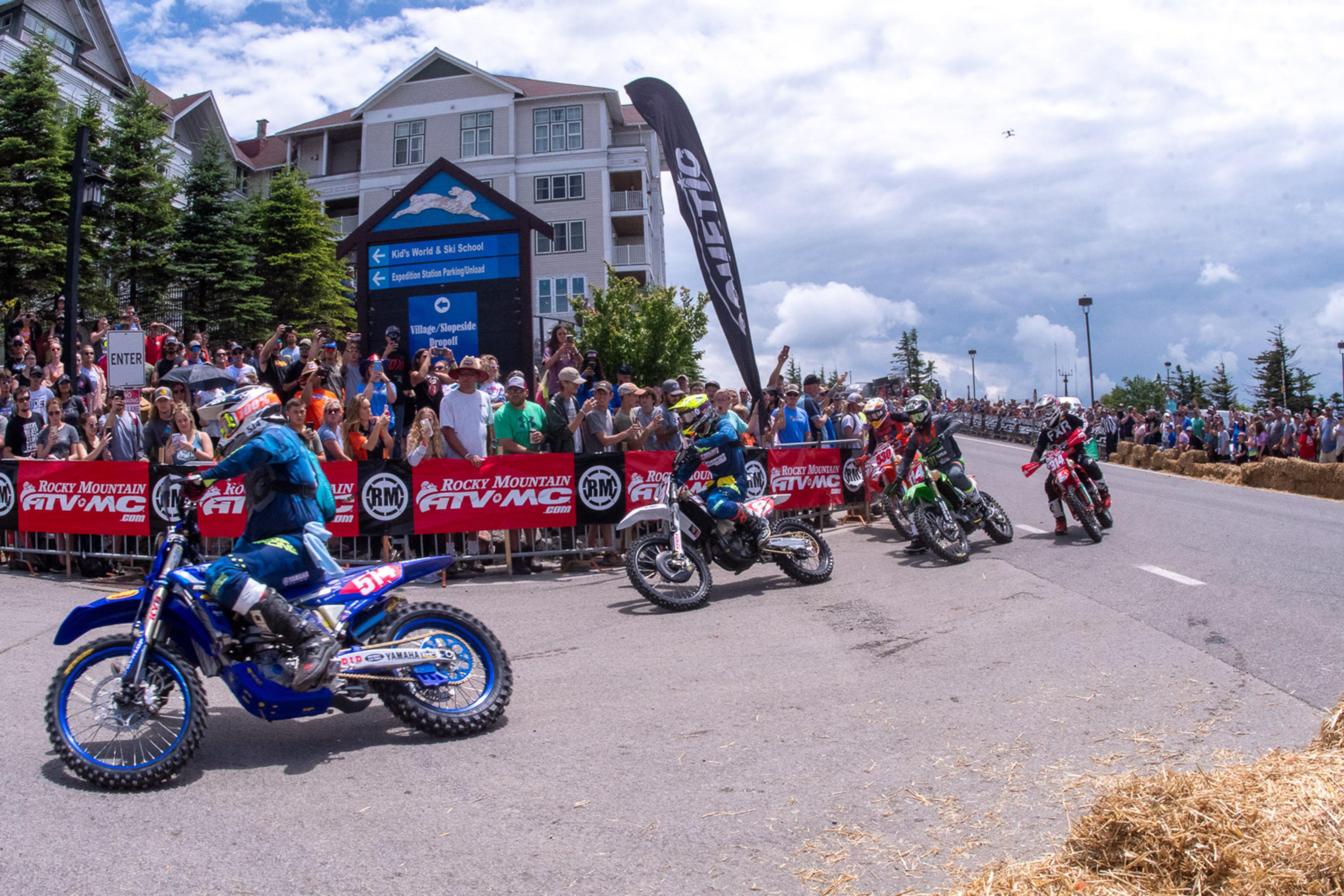 GNCC summer break is in full swing and so far it looks like the majority of the GNCC Racing Nation has been finding ways to stay busy. Some folks have kept right on riding and racing, while others have been participating in some more traditional style summer activities. Regardless which category you fall into, at some point in the coming weeks you’ll probably start looking forward to getting back into the swing of GNCC Racing, if you’re not already. The good news is that at this point, there’s only about 57 days left until we get back to racing. Sounds like a long amount of time, and a short amount of time, all at the same time… If that makes sense?

I mentioned this a few weeks ago but for a big chunk of the faces you see working at the GNCC events, this summer break really isn’t much of a break. Between Pro Motocross, Loretta Lynn’s and ATV Motocross, just about everyone on our end is staying busy and it’s always great to see some familiar faces from the GNCC crowd at other events. Kayla and I spent the last two weekends helping out with the RedBud and Southwick Pro Motocross events. Naturally, RedBud brings out a lot of people and being just a few hours from Crawfordsville, there’s a lot of GNCC fans in attendance there.

Up in the Massachusetts sands of Southwick, it was pretty cool to see Ben Kelley and Josh Toth in attendance cheering on some of the world’s best motocross racers, plus the famous “MotoFro” Rob Brown out on track as a Wheels on the Ground flagger, and just generally spotting a number of GNCC shirts in the crowd was cool as well. Kailub Russell raced both of these events, and after some tough luck at RedBud, KR also suffered a broken shifter in the first moto at Southwick. Coming from basically dead last, and almost a whole lap down on the first lap to finish moto one in 24th was pretty solid, and KR backed that up with a 16th in moto two to end the day 18th overall. Some folks may have been think he’d go out there and be challenging for moto wins, but that 250 class is incredibly deep this year and full of guys not afraid to run a 250F on the absolute ragged edge. Don’t forget that Kailub isn’t racing this season to pursue a new career in motocross but this is rather a “thank you” from KTM for his career and it’s all about fun.

Speaking of fun, there’s a whole lot of fun about to go down in Tennessee as we’re getting geared up for the Monster Energy AMA Amateur National Motocross Championship at Loretta Lynn’s. Loretta’s is always the biggest amateur motocross event of the year and not only does a big chunk of the GNCC staff have a hand in making it happen but there’s always a number of current and past GNCC racers who make the trek to the ranch to do some racing. This year is no different as there’s a number of folks from the GNCC Racing Nation who are signed up and ready to go racing this year. The official rider roster is in the process of being finalized and posted as we’re making this week’s edition of Quick Fill live, so check back next week and we’ll let you know a few names from the GNCC Racing Nation to keep an eye on!

Outside of all these motocross happenings, things are a little bit on the quiet side but we did hear that Johnny Gallagher won a race. Naturally, in true Johnny G fashion, it was a classic mud race as part of the EROC series in Ohio. Johnny mentioned on social media that he almost just left his quad in the truck but remembered he’s a pretty decent mud rider. Johnny ended up grabbing the win with Josh Merritt second, Cole Richardson third, and Walker Fowler fourth. So, it was actually a fairly stacked Pro class and it goes to show that when the going gets tough and muddy, you really can never count out the crafty veteran rider. Great job, Johnny!

Several weeks back we started taking a look at how some of the championship battles were beginning to shape up. We talked about the battles for the GNCC National Championships on both the ATV and bike side, both of which are pretty exciting in their own right. With Snowshoe in the books and summer break in full effect, we’ll briefly recap those overall championship hunts and then start looking at a few other classes. In the coming weeks we can dive a little deeper before getting back to racing in September.

On the ATV side, Walker Fowler has pulled out a bit of a lead but it’s definitely not over yet. Walker has a 71 point lead over second place rider, Hunter Hart while Jarrod McClure sits third, just seven points behind Hunter and Cole Richardson is fourth, just three points behind McClure. While Walker is in a comfortable spot, he still has to stay on top of his game as any sort of issue could still cost him in his hunt for championship number seven. At the same time, Hart, McClure and Richardson are in a battle of their own as they will not only want to stay ahead of each other, but also as close to Fowler as possible.

This is pretty exciting as not only is the door open to track down Fowler, but there are three guys who all stand a chance to capitalize on any misfortune from Fowler. Even if Walker puts his head down and wraps up the title early, all three of these guys will still be duking it out for that second place spot. It will be pretty exciting to watch this all unfold through the final rounds!

In the ATV XC2 class, Ronnie Rusch holds a 35 point lead over Ben Kowaleski in second. Third place is Tanner Walker, who sits 18 points behind Kowaleski while Branden Owens is fourth and 13 points behind Walker. This class has actually been pretty interesting to watch play out so far as Branden Owens and Wyatt Wilkin both have multiple wins this season, but have also suffered from some tough luck that have kept them a little further down in the point standings. Ronnie Rusch has been a consistent podium finisher, only finishing off the podium twice and never worse than sixth place. While he still has a lot of work cut out for himself, Rusch is showing that consistency is key as he leads the hunt for the XC2 National Championship.

When it comes to the bikes, Ben Kelley still leads the way and padded that a smidge further with a win at Snowshoe. At the same time, Steward Baylor has been the man on a mission and has been chipping away at Kelley’s lead for quite some time now. With the series on summer break and plenty of time to think about what needs to be done, Baylor sits just nine points out of the lead behind Ben Kelley. With a podium finish at Snowshoe, Jordan Ashburn has worked his way into the third place spot, but sits 45 points behind Baylor and 54 points out of the lead. At the same time, Grant Baylor is just two points behind Ashburn and Josh Strang is just three points behind Grant.

So, this means that the third through fifth place guys are separated by just five points. Also, these guys still all have a mathematical shot at the championship as well. Obviously this means that both Steward Baylor and Ben Kelley would both have to suffer enough misfortune to score zero points for multiple rounds but crazier things have happened but right now it looks as if Kelley, Stu Baylor, Ashburn, Grant Baylor and Strang all have mathematical shots at the championship.

In the XC2 class, Johnny Girroir has become a dominating force winning six of nine races so far. This has helped him to pull out a 34 point lead over Craig Delong in second while Cody Barnes is third, 52 points behind Delong. As of late, the biggest mix up in the XC2 class has been the question of who is going to land on the podium. Last season and through the early stages of this season Girroir, Delong and Mike Witkowski were the three guys dominating the XC2 class. However, Witkowski has suffered some tough luck this season and Delong just hasn’t been able to top Girroir as many times as last season.

This has opened the door for guys like Lyndon Snodgrass, Ruy Barbosa, Thorn Devlin, Ben Nelko and Ryder Lafferty to land on the podium and also see guys like Liam Draper and Evan Smith run in contention for a podium finish as well. While the championship hunt may not be as tight and exciting as 2020, the depth of the class and number of different contenders for 2021 has made the XC2 class incredibly exciting as well.

That’s actually going to do it for this week’s edition of Quick Fill. We’ve got more time to kill in the coming weeks, so be sure to keep checking back for some of the latest summer break happenings. As always, if you have any cool info to share, feel free to drop me a line at [email protected] and share your latest news. Until next time, enjoy your weekend and we’ll see you back here next week!