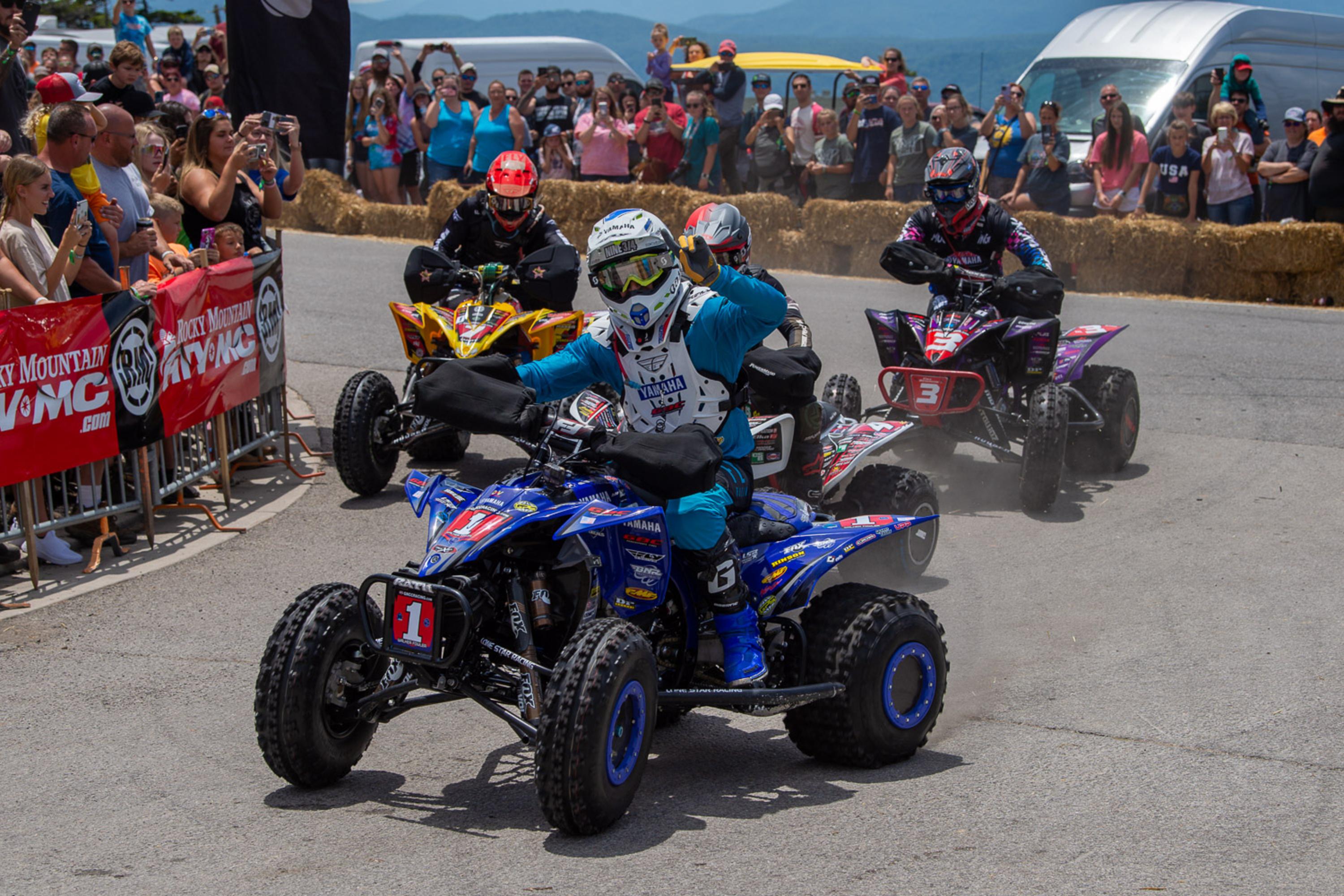 Well, summer break is here. It seems like we just kicked off the 2021 GNCC Racing season and we’re now already nine rounds deep with just four remaining. However, there’s a long summer break standing between us and those final four rounds, and there’s plenty to think and talk about throughout the summer. Not only are there points battles to take a look at, but there’s multiple scenarios involved there to consider, and many riders will spend this summer break figuring out what they need to do to get the job done in the final four rounds.

This year it felt pretty good to have a more traditional cap on the opening rounds as Snowshoe finally returned as the final event leading into summer break. As far as the weather and conditions are concerned, this just may have been the best Snowshoe event in history. Sure, the ski slopes were a bit dusty which could be a bit sketchy when you’re going that fast but overall, it turned out to be a pretty good race. Yes, we know those ski slopes aren’t ideal, but neither is sitting at an impassible bottleneck trying to get from one side of the mountain to the other. Plus, there’s just not really any other choices and that’s the nature of the beast racing on the side of the mountain.

Everyone involved from the GNCC staff to the Snowshoe staff is pretty happy with how everything went as a whole, but we all know there’s a few things we need to work on moving forward. We’ll do our best to make the Snowshoe experience even better in the future, but all things considered with the biggest Snowshoe crowd of all-time and some unexpected changes to the track itself, it actually all came together really well. The only real complaints I heard from riders were that the ski slopes were a bit fast, but everyone seems to understand that’s just part of this event. Oh, and that the rocks were slick but hey, only so much anyone can do to control that!

With the series now on summer break, that means that a lot of racers will either take a few weeks off or just keep rolling with some other events. On our end, we’re still wide open with Pro Motocross, ATV Motocross and we’re gearing up for Loretta Lynn’s in a few weeks as well. Actually, a few of us are at RedBud this week for Pro Motocross and there’s also a few familiar faces at Pleasure Valley MX for ATV Motocross and a whole bunch of us will be at Loretta Lynn’s. So, that does mean that we’ll keep this edition on Quick Fill a little bit on the short side as we’re all over the place prepping for a few events, but we still wanted to share a few things.

Speaking of Loretta’s, it also looks like there are a number of familiar GNCC racers who are making the trip to Loretta Lynn’s this year as well. As with every year, once the rider rosters are finalized, we’ll take a look through and let you know who to keep an eye on in some of the upcoming editions of Quick Fill. It’s always really cool to see a number of racers take part in what most folks consider the “World’s Greatest Motocross Vacation” but don’t forget that Loretta Lynn’s also serves as a round of the Specialized Turbo GNCC eMTB National Championship!

So, as you can see there’s a lot going on this week and in the weeks to come. We’ll save some of the goodies for the coming weeks as there is a good bit of time to kill but we’re also going to hear from Ken Hill before wrapping up this week’s Quick Fill. That’s all from me this week. Enjoy your weekend and if you’re out at RedBud this weekend, feel free to say hi!

Well, the 2021 Snowshoe event is over, and it went by incredibly fast! There was so much going on it was very difficult to keep up with it all as graduations, weddings, proposals and so much more were planned for this venue and then the racing. I think I have only missed one event here and that was back when I was on foot and only shooting Saturday. Now it’s turned into a non-stop, action packed piece of work that makes my head spin, so I am grateful for the summer break to recoup some mental health time, ha! Well, there is a break but most of us will never see it as the office and crew splits as other events are scheduled so just saying there is a break will have to suffice.

The weekend started for me by covering the Yamaha GNCC University and that flowed right into the regular weekend event. I have shot images of many “schools” but wow this one was big and filled with incredible talent on the two and four-wheel sides. The students ranged from knee high to folks that could be eligible for AARP but age takes a back seat in our sport and no one was cut any slack as some very difficult tasks were presented as the training moved from basic to advanced over the course of the school. The Yamaha instructors were incredible as they worked as a group and with individuals that needed extra assistance. I wouldn’t expect anything less from the bLUcRU and they did not disappoint.

Friday afternoon was casual as the racing nation turned Snowshoe into a fully stocked city atop the world as truck after truck pulled the mountain and got parked. It was an amazing sight as things went from plush and comfy to plush, comfy and packed full of racers and fans! This year’s one loop race kept folks mainly on the one side for the best vantage points including Howards Hole. Condos and the high life graced the mountain top but down the ridges fans flocked to what seemed like an endless supply of places that offered intense racing and the chance for mud fleas to do their thing and help out. The weather really helped as this was one of the drier Snowshoe’s in recent memory which was a letdown to many as rain really makes this place a beast of a race. For me, I shoot whatever is in front of me and even though I don’t like getting my gear trashed it is fun to watch the antics and capture the difficulty everywhere and I mean everywhere.

I had every intention to do things as normal until I got word last minute that Rory Mead was going to climb the mountain during the 10 AM ATV race. I shot the starts and then headed down to the bottom and caught Rory before his assault and then leap frogged up the mountain to capture his efforts. He is an amazing man, struck down by an accident that may have taken his ability to walk but not his racing heart nor his fierce competitor within as today’s challenge wasn’t for him but for another racer that went down and is fighting the same fight Rory had to wage war on. I would have to say this was the highlight of my weekend knowing the meaning behind it all. God bless you Rory and thank you for never giving up!

The racing itself was pretty solid as nothing comes easy on the mountain. Any win or solid finish or just finishing is deemed a success here and for good reason. You alone can judge your success by the goal you set out entering the weekend and I even had my own which I met except one. I put out a bit too much energy Saturday and worked too late which cost me Sunday morning. I think I did pretty good for what I am dealing with as this is a tremendous event for someone in great health, so I am satisfied, for now! The event in Beckley is going to be another beast for a host of reasons but I am looking forward to the challenge.

That is about it for me as we close out the first half of the season. I know everyone will still be racing with some vacation or down time mixed in and you all deserve it. It’s been a knock down drag out fight through this first half and things are only going to get more intense as the points battles start to come into close focus and we get to see who is going to claim the coveted championship positions throughout the ranks. As always, please be as safe as you can in whatever you do and may the good Lord continue to bless us all. See y’all in the fall!