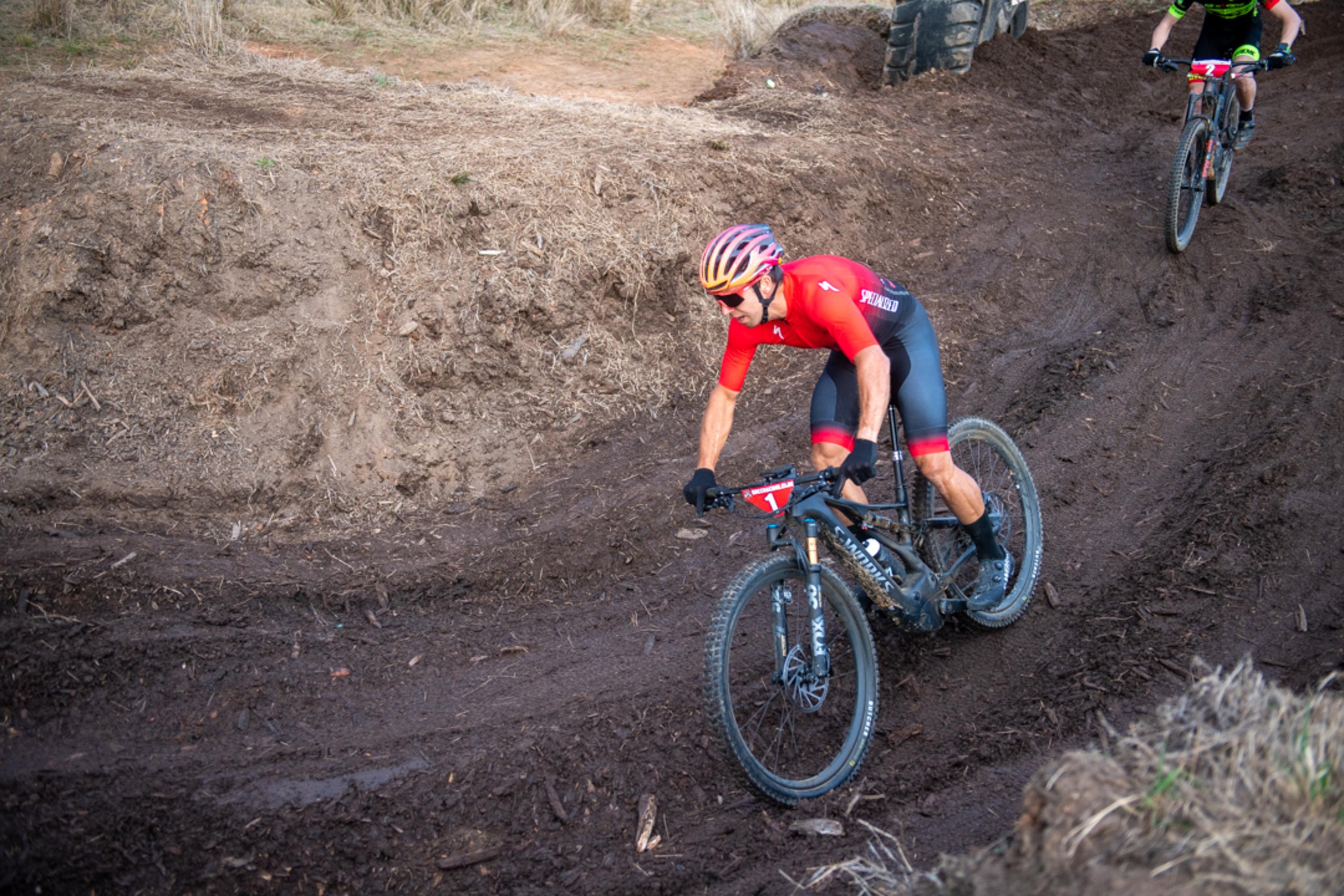 WASHINGTON, Ga. (March 22, 2021) – Round one of the 2021 Specialized Turbo eMTB GNCC National Championship kicked off at the Aonia Pass MX facility in Washington, Georgia, where 88 racers competed on a fast-paced and technical four-mile course. Thanks to an explosion of eMTB popularity, there has been an increase in excitement about eMTB racing throughout the United States.

Coming mainly from cross-country MTB, as well as the “moto crowd” (GNCC and motocross racers), a wide range of participants have been up lining up for eMTB races at GNCC events for the past two years.

The XC1 Pro class was won by two-time world eMTB champion Charlie Mullins, who beat out fellow Specialized rider Cypress Gorry by 24 seconds at the finish. Mullins is a pioneer of the eMTB movement.

Runner-up finisher, Gorry, talked about how he got into eMTB racing.

“Cross Country Mountain Biking is my background,” said Gorry. “I’ve done a lot of that. The course is a little different from Cross Country. There are so many lines to choose from. I’m so engrained to there’s one single track, one trail and you stay on that and that’s the one line, whereas here it was hard to get used to just being able to pick any line you wanted to and knowing if I’m on this one, there may be one that’s faster, or maybe I’m the faster line. You never know until you get a few laps in. Like, okay, this is the faster line. Hopefully it’s good, but you never know. It was a total blast!”

“I grew up riding motorcycles but then I got into bicycle racing, enduro and downhill,” said Teasdale. “Then Randy Hawkins noticed me at one of those races and he offered me this E-bike thing, so I tried it.”

Teasdale talked about the difference in eMTB and traditional mountain bike races.

“I did enduro, so it’s like you climb up to the top and that’s not timed, but then downhill is timed. So that’s like five-minute stages, and this one is just an hour,” said Teasdale. “So, it’s different in that way that I have to go a constant hour. It’s about the same style. It’s flatter and rolling. Enduro is just downhill, mainly.”

Like Teasdale, Callie Horwath was making her first appearance at an eMTB race and she came away with the win in the Women’s eMTB class.

“It was pretty awesome, actually,” said Horwath. “My boyfriend races dirt bikes and I was like, ‘I don't want to race dirt bikes because they’re way too fast’. I used to race XC bikes, so I was like, all right, it’s a happy medium. So, I figured I’d give it a go. It’s totally different from cross-country. It’s way more fun. The pace is a lot faster. I feel like you have to be more technically skilled on the bike. It’s not just about fitness. It’s about bike handling skills. So, I think that’s what’s really cool about this sport.”

XC1 participant William Pegram did not finish the race due to a flat tire, but he was thrilled with the three laps he finished. Pegram is one of the many riders coming from motorcycle backgrounds.

“I raced GNCC from 2005 to 2011, motorcycles, and then got hurt, picked up mountain biking in the meantime and got relatively good at it pretty quick so I started picking that up,” said Pegram. “I’ve done that for the past ten years now. It’s been great. I love it.”

After the race, Charlie Mullins spoke more about the evolution of eMTB racing.

“I think it’s definitely its own sport,” said Mullins. “I think originally the idea some GNCC racers could do it as a warm-up, but as we found, it’s very physically demanding. It would be hard to race an e-bike and then race a bike or ATV. So, it’s kind of become its own unique animal. It’s definitely growing. To have almost 100 riders in the first race is a great sign of the series growing. The competition is getting harder, so it’s just making me want to push that much more, so definitely good.”

This summer, Loretta Lynn’s will host the FIM World eMTB Championship, which will feature a $10,000 Pro Purse. More about this event will be released in its own press statement.

For more information on the GNCC Series, visit the official website at www.gnccracing.com or call (304) 284-0084. Join the conversation and be sure to always hashtag #GNCC.

To get the latest GNCC Racing clothing and merchandise visit https://www.mototees.com.

Racer TV and MAVTV are the official homes for coverage of the Grand National Cross Country (GNCC) events. All 13 rounds, from the season opener in South Carolina to the finale, will air in taped-delayed telecasts on MAVTV, while Racer TV provides live streaming coverage of the 2 p.m. ATV and 1 p.m. motorcycle races from each event. Catch all the action at http://www.mavtv.com/ and http://www.racertv.com/.

The Grand National Cross Country Series presented by Specialized is the World’s premier off-road racing series. Founded in 1975, the 13-round championship is produced exclusively by Racer Productions. Cross-country racing is one of the most physically demanding sports in the world. The grueling two and three-hour GNCC races lead as many as 2,400 riders through racetracks ranging in length from eight to 12 miles. With varied terrain, including hills, woods, mud, dirt, rocks, and motocross sections, GNCC events are tests of both survival and speed. The series draws talent from all over the U.S., Central America, South America, Europe, Japan, Australia and New Zealand. GNCC Racing is televised live on RacerTV.com. For more information, please visit www.gnccracing.com.

The Specialized Turbo eMTB GNCC National Championship brings off-road racing and pedal-assist or electric bicycles together for an eight-round championship produced by Racer Productions. Much like a typical cross-country racing event, these races feature varied terrain including hills, rocks, roots, and more. Limited to electric or pedal assist model mountain bikes only, the championship was added to the GNCC Series in 2019. Visit www.gnccracing.com.

Founded in 1924, the AMA is a not-for-profit member-based association whose mission is to promote the motorcycle lifestyle and protect the future of motorcycling. As the world's largest motorcycling rights and event sanctioning organization, the AMA advocates for riders' interests at all levels of government and sanctions thousands of competition and recreational events every year. The AMA also provides money-saving discounts on products and services for its members. Through the AMA Motorcycle Hall of Fame in Pickerington, Ohio, the AMA honors the heroes and heritage of motorcycling. Visit www.americanmotorcyclist.com. Not a member? Join the AMA today: www.americanmotorcyclist.com/membership/join.