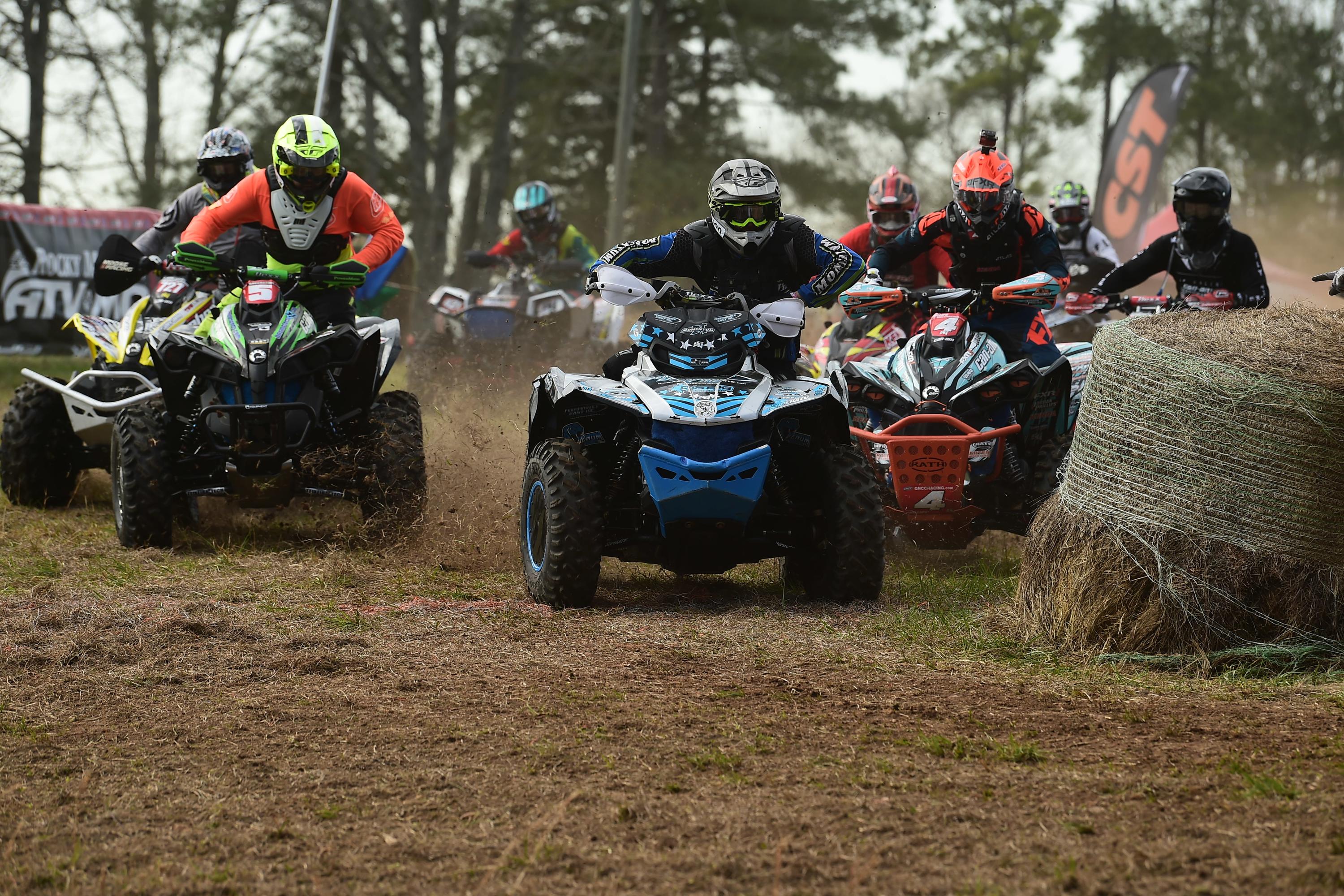 We hope you’re all hanging in there as we continue to progress through the current situation in the world. Trust us, we’re wanting to get back to normal just as much as the rest of you but this doesn’t happen overnight. Everyone has their opinions on the situation, but at the moment we just have to bear through it and get to the end as quickly as possible. Unfortunately, due the ongoing concerns we’ve had to postpone the Camp Coker event. You can read the full Competition Bulletin HERE. As for a reschedule date, that will take some time to assess and come up with a final plan, so stay tuned for details there.

In the meantime, we’re still working to keep you entertained! This past Sunday we premiered the first edition of RacerTV Behind the Bars. In this new concept we take some top talent and virtually sit down via videoconference, watch an old GNCC TV show and do a little bench racing. The first episode featured Griff Cotter and myself hosting Barry Hawk, Charlie Mullins and Mike Lafferty watching the 2005 Yadkin Valley Stomp GNCC. It turned out to be really cool, so if you missed the show be sure to check it out HERE.

If you watch that episode, Griff kind of gets me to talk about some of my own experiences, which I don’t do often, nor write about here because I always figure when you guys are watching or reading GNCC content you don’t want to hear my personal stories, unless it involves working in the woods during the week. However, it was cool to talk about that event because looking back, it was that particular race that made me want to be a part of GNCC Racing. I’d followed GNCC Racing for quite some time before that and had attended races, but looking back I feel like I went home from that race feeling a whole lot different about GNCC Racing.

I wanted to share that because I took that passion for GNCC and eventually turned it into a full-time job. Sure, back in the day I would have loved the chance to be a professional racer but I just don’t have, nor have I ever had, that level of talent. Instead, I found my talents elsewhere. Coupling that with a good sense of direction eventually led me to where I am today and while it may have not been the original dream, it’s still really cool to get up every day and be involved with racing in some aspect!

Enough about that, though, let’s talk about what’s on the horizon. We’ll have another episode this weekend, and while I don’t want to ruin too many of the details before it premieres, I’ll just say that we’ve got Adam McGill and Bill Ballance lined up for this episode. Obviously McGill is always entertaining and it will be great to catch up with Bill as well, so we’re definitely pretty excited to knock this episode out. Moving forward, we want to keep the Behind the Bars series going once we get back to racing. We’ve got plans to do more than just watch old races, and I’m really excited to see this series come together.

We wrapped up the McGill and Ballance episode this afternoon and it’s definitely going to be worth the watch. Even if you’re a bike racer who isn’t super familiar with the ATV side, it’s still really cool to listen to these guys stories about racing and just life in general. Keep your eyes peeled to GNCC social media and the website as we’ll be premiering this episode this weekend.

Going back and watching the copious amounts of GNCC TV shows to see what would be a good Behind the Bars episode has been pretty fun. We’ve seen some really interesting racing over the years, and it’s really cool to see how much we’ve evolved and grown, even just in the last 20 years. Yes, there’s plenty of folks who talk about how much tougher it was back in the day and while we’ve in some ways we have transitioned away from overly technical racecourses, it’s not as much about the courses changing as it has been adapting to the evolution of everything else.

What do I mean by that? Well, over the years the series has grown exponentially and we’ve got so many people who want to go racing these days that there’s a huge range of talent levels out there. Eliminating some of the tougher sections can be a bummer for those who enjoy that, but it also eliminates the potential of having huge bottlenecks just by simply having a section that might be too tough. At the same time though, it’s still pretty darn tough! The natural terrain a GNCC racer encounters is something that an average person could never imagine doing on a motorcycle or ATV.

Looking back at those older events, there were definitely more technical areas than we have now, but it’s really not THAT much different. One of the biggest changes has actually come with both the machines and riders themselves. Suspension continues to evolve for the better, which makes the terrain easier to navigate. Machine quality has improved over the years, which makes it easier to keep your bike or ATV together through the entire event. Riders themselves have adapted to these changing machines and have been able to push themselves to a new level as well.

So, with the evolving machines and rider talent levels it’s only natural that what was once considered to be overly tough and technical is actually considered to be much easier these days. Rocks, roots, and hills only change so much over time but evolution of racing machines and the riders on them more than compensate for the challenges Mother Nature throws at them.

I kind of got off on a unique tangent here but I hear so much about racing being much more difficult back in the day and while I agree, I also look at it like a racers idea of what’s “difficult” and what’s “easy” has made an even bigger change. This is actually a good thing because it shows that the talent level of even the most average rider in each class has grown, and while there are more beginner riders than ever, we can’t forget that we all have to start somewhere!

Other than that, news has been pretty slow this week because, well, everyone seems to be doing their part by social distancing and staying home. There’s some riding going on, but it looks like folks are really keeping the group sizes to a minimum, which is also great to see. Like I said, if we can tough through this now and stick to what is being asked of us, we’ll be able to get back to normal sooner. It’s still going to take some time and it doesn’t seem like anyone has a real answer, but please, be patient because there’s nothing you can do about the situation.

Day 349 of staying at home. There isn’t a chore left to do nor a project left to complete! Oh I wish that was true, just without the 349-day thing! I am not complaining as I am built for this as I self isolate as it were by choice and town is a place filled with evil demons and gremlins, so not going anywhere is not new to me either. If it were not for the horrific stories that are coming out of our larger cities and the mounting death toll, I wouldn’t know there was a “Stay at Home” order in just about every state.

As it stands now I do not personally know anyone who has contracted this virus but quickly that could change and why we all must remain vigilant and do our best to stay separated to try and keep it from spreading at a rate that doesn’t overwhelm our healthcare system. Yes, indeed, it sucks for millions upon millions people and the racing community is an industry or network that is being slaughtered by the mass cancellations we have all experienced. Our social media feeds are just starting to show the financial impact this is having on our racing families that are taking the financial impact on the chin and it is going to get worse even as our government looks for ways to get us all through this which pains me to even say.

Now it is not all doom and gloom if you try and look for the good things in most of this. Spending time with family is something money can’t buy and many years from now these days may provide us with some memories that will last a lifetime. In between posts about the negatives, I see families doing things that would other wise be forgotten or missed as we go about our hurried lifestyles. There seems to be no shortage of folks getting out and doing some throttle therapy. However that is getting pinched as riding areas in some locations are getting shut down leaving slim pickings but that wont stop us, never has!

The series itself has come out with a creative way to help keep the kids and a few adults occupied with pages to color to help alleviate some the boredoms we find all too often during all of this. Several podcasts have been trying to work things out so that we can enjoy a taste of our chosen sport while things outside look to beat us up and keep our spirits dimmed. Hey I have seen many of you exhausted, cold, wet and muddy pull in after a race with smiles that could defeat the devil himself so I know we will be ok soon.

So that is about it from this week, kind of real happy I am here and healthy to write this even if the subject matter is something I did not have even think about. Be sure to keep tabs on the series social media as they try and keep everyone informed and entertained through all of this and please be sure to thank them as they continue to do their very best for all of you in these trying times. As always, be safe in all you do and may the good Lord continue to bless us all.