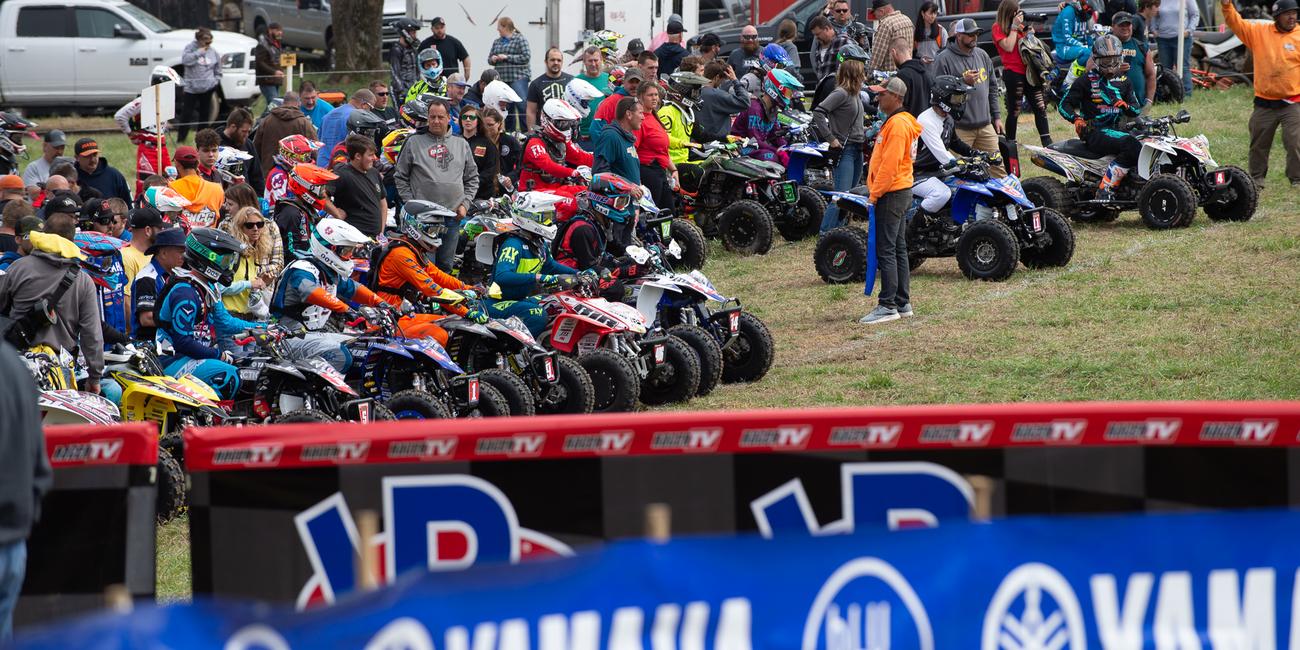 Quick Fill #7: This Week in GNCC

The off-season is winding down and this time next week we’ll be full bore heading into round one of the 2020 GNCC Racing season. The first wave of the track crew is heading that way this weekend to get started and we’ve got big plans for a really cool racecourse at Big Buck and we hope that some time off has given the property extra time to heal and possibly produce some serious “hero dirt” as the weekend progresses.

Yes, we know there were heavy rains there last week but word from around Big Buck is that this week has been much better and the Big Buck facility isn’t as saturated as people on social media seem to believe. The forecast for next week is constantly changing and while there’s some rain in the forecast, as of right now it’s not much and the percentages are pretty low. I’m going to leave it at that with the hopes of not jinxing that favorable weather forecast but despite the rumors that some people like to float around, we’re still full steam ahead on going racing at Big Buck.

Speaking of Big Buck, we do have a big weekend planned. First off, as tradition with the first round of the season, we will be offering practice on Friday and Saturday. ATVs will practice on Friday with ATV youth from 1-2PM and AM/PM ATV racers from 2-4PM. Unfortunately, due to time and space constraints there will be no Micro practice. On Saturday, Youth bikes will practice from 12-1PM and AM/PM Bike riders will practice from 2-4PM. The cost for practice is $20 and you must sign up for the race in order to practice.

Saturday night our friends from Monster Energy are sponsoring a social hour featuring craft beer and ice cream, followed by a viewing of the Supercross race. This should be a great opportunity for everyone to get together, do some bench racing and just generally have a great time! Exact times are still to be determined on this, but stay tuned and listen to the announcers throughout the weekend for all the details.

We’ve also heard that this year Specialized will be hosting group rides on Friday and Saturday evenings at 5 p.m. with the 2019 Women’s eMTB National Champion, Ashley Hendershot. For anyone interested in these rides, you will simply meet at the Specialized display in Sponsor Village at the GNCC event a little bit prior to 5 p.m.; Demo bikes will be available on a first come first serve basis, and these rides will be for any skill level rider. This should be a lot of fun and worth the seat time, so don’t miss out!

Moving on, if you’re coming to the races this year and would like to help out with Registration, Check Points, Road Crossings, or other various positions we’ve actually added a new form to the website that you can fill out to express your interest. We’re looking for people who can work both, or even just one day of the event. This could be a good chance for someone who wants to race Sunday and help out Saturday, or vice-versa. Check out the form HERE. You can select which events, days and times you’re available.

Other than prep for Big Buck, it’s actually a pretty slow news week in regards to GNCC Racing! Everyone is putting in their final preparations for the season to begin and have been getting in plenty of seat time as well. Ken Hill has been down south catching up on some photo shoots as well and while he’s travelling today, we’ll head from him soon and I’m sure he’ll have some interesting stories to share from his adventures.

That’s going to do it for the intro this week, we’ll continue our 2019 season recap this week before ending this edition of Quick Fill. Until next time, enjoy your weekend and we’ll see you next week!

At the conclusion of the GNCC summer break, the series would head to New York for the Black Sky GNCC. With the summer to regroup and get ready for the final push of the season, Black Sky looked to be one of the more exciting events of the season, as all the top GNCC talent would be looking to start the final four rounds of the season on a high note. It would prove to be yet another weekend of intense and exciting GNCC Racing.

Saturday’s ATV race would once again be business as usual for Walker Fowler who jumped out to the early lead and held that lead all the way to the end. However, it wasn’t really a runaway win for Walker as he was challenged each lap, all the way to the checkered flag. Jarrod McClure would control the second place position from lap two, on through the end of the race, eventually ending the day just over seven seconds behind Fowler. Cole Richardson would put in another solid ride of his own to end the day on the podium in third place, just about 40 seconds behind McClure.

Sunday’s bike race would prove to be an exciting one with a tight battle down to the wire. Layne Michael and Ricky Russell would lead the opening laps of the race before Kailub Russell would find his way into the lead, and swap that lead back and forth with Ricky Russell several times throughout the entire race. Thad Duvall would be forced to work his way through the pack, coming from as far back as seventh place to eventually become a contender against the two Russells.

The final lap would prove to be a barnburner, as Ricky Russell would head through the final stages of the race with the lead and Kailub Russell close on his rear wheel. As they emerged into the final grass track section, Ricky would choose one line heading around the end of the pond by the finish line, while Kailub would be able to line up onto a different, slightly straighter line and make the pass for the lead. Kailub would hold off Ricky into the finish with KR taking win and Ricky ending the day in second. Duvall would hang in for a third place finish while Steward Baylor and Jordan Ashburn rounded out the top five. Kailub’s win would mark his 60th career win, making it that much more exciting to watch unfold.

In the XC2 class, Ben Kelley would take his tenth straight win of the season and wrap up the XC2 class championship with three rounds remaining. Craig Delong would put in a great ride to end the day in second with Evan Smith rounding out the podium in third. Jonathan Johnson would put in his best ride of the season up to this point to end up fourth, while Ryder Lafferty rounded out the top five of the XC2 class.

With Black Sky in the books, the series would then head to Mason-Dixon for one of the driest and dustiest races we’ve seen in a number of years. This would more so come into play on Sunday’s bike race when the fine, powdery silt would play a big role in the outcome of the race. As for Saturday, well, Walker Fowler had a shot to wrap up with 2019 GNCC ATV National Championship, so he went out and did exactly what he needed to do.

Fowler would lead all four laps and maintain just around a 30 second lead over second place, which would end up giving him the race win. Nothing dramatic, nothing wild, just a good old-fashioned performance that would result in Fowler wrapping up championship number five. Jarrod McClure would put together another great ride to end the day in second place and Devon Feehan would land his first XC1 podium finish in third. Brycen Neal would end the day in fourth while Adam McFill rounded out the top five.

On the bike side, the early surprise of the race would come from Jordan Ashburn who would lead laps two through four of the six-lap race. Jordan was looking super fast but would unfortunately fall victim to the dust and be forced to end his day early. Steward Baylor would also be struck with the dust bug as his bike expired early, as did Grant Baylor’s bike as well. The dust was taking it’s toll on everyone and even effected the Factory KTM guys who despite all efforts would end up suffering from poorly running machines due to the dust with Kailub Russell, Josh Toth and Ben Kelley all three falling off the pace and just trying to limp their bikes to the finish.

In the end, Thad Duvall would take the win with Ricky Russell and Trevor Bollinger landing on the podium as well. Andrew Delong would hold on for a season-best fourth place finish and Layne Michael rounded out the top five. In the XC2 class, excitement had built as Ben Kelley, with the XC2 championship wrapped up, had made the decision to move up to the XC1 class. This would leave the door wide open for a number of challengers looking to claim an XC2 win of their own.

Mike Witkowski would jump out to the early lead, but much like the contenders of the XC1 class, Witkowski fell victim to the dust and his day would end early. Liam Draper would inherit the lead on lap four before Ryder Lafferty would hold the lead coming to the checkered flag. Unfortunately for Ryder, with just around three miles to go, his bike would also give in to the dust and leave him stranded, waiting for a tow.

Draper would then climb back into the lead and hold it to the finish to take his first-ever XC2 class win. Craig Delong would end the day in second with Evan Smith once again rounding out the podium in third. Austin Lee would put together a good ride to end the day in fourth while Zack Hayes would keep his bike running to end the day fifth in the XC2 class.

At this point, 11 rounds were completed and just two more remained. Thad Duvall actually still had a mathematical shot at the National Championship with two rounds remaining, and many folks were wonder just what may happen in those final two rounds. Check back next week when we wrap up our 2019 season recap, just before the all-new 2020 season begins!