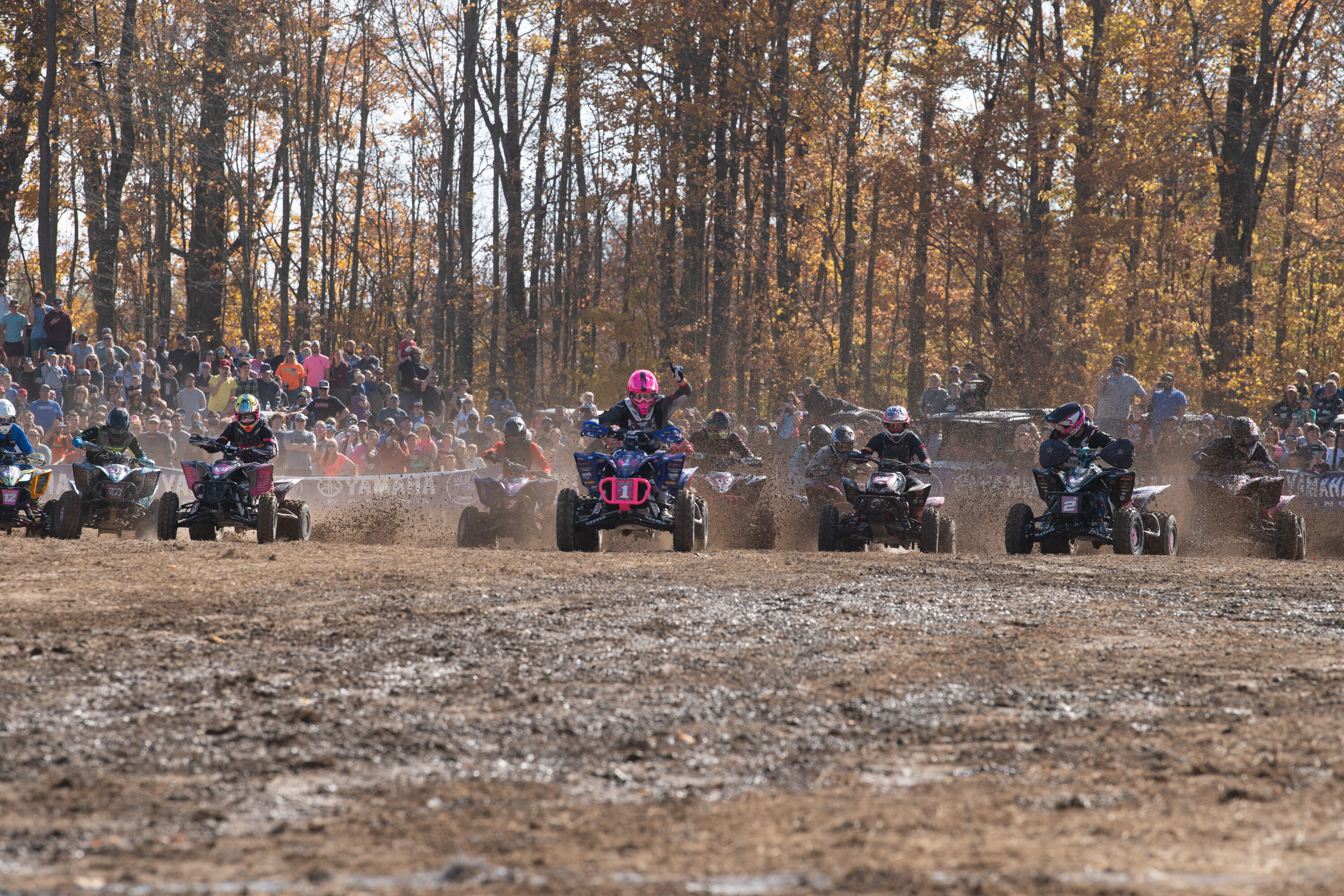 Hey, it’s banquet time! That’s right, we’re rolling right on into the GNCC Banquet weekend with the ATV and eMTB Banquet taking place on Friday night and the bikes on Saturday night. Now, I feel like I say this every time we talk about the banquet, but we’ll throw it out there one more time; it’s actually kind of cool to come together and have what feels like a full blown GNCC race weekend just without the racing. The banquet is a great time to catch up with each other without the worries of trying to get ready to go racing.

There’s been a lot of big news happening since last week’s edition of Quick Fill, but we’ll start with the 2023 GNCC schedule. Yes, this went out this week actually ahead of the banquet so start making your 2023 plans now! You will see that for 2023, the series will only be 12 rounds instead of the traditional 13 round series. There are a number of scheduling conflicts with our other events and some new events we’ve taken on, so instead of trying to push the series into November (which would conflict with the ISDE for our pro bike racers) we felt it best to run a 12-round series for the time being. This should also help some of you amateur racers who are paying a lot in fuel and travel money! Check out the PR about the schedule HERE.

Once again, we’ll be starting at Big Buck, then down to Florida before coming straight into Georgia. I believe word is out that they did some logging on the Georgia property, but Jeff Russell and Ryan Echols spent a whole day down there a few weeks ago and they feel we’ll still be able to go racing there with no issues. Now, it’s not going to be a typical GNCC woods race our first time back but over the next couple of years this will actually help the Georgia racetrack out tremendously as it eliminates a lot of old trail, going every which way that we don’t use anymore and will allow for some new trail to be developed.

From there we have a TBA event. Now, I mentioned this previously in Quick Fill but we’re trying to lock down a different location for that TBA event that would be in the same general area as Big Buck, but not run Big Buck twice. If this other location doesn’t come together, we’ll have to do a second Big Buck event again but hopefully between then and 2024 we could come up with a new venue.

Speaking of that, I’ve been reading a lot of comments on social media, and we do understand that not everyone likes racing the same locations twice in a season. Neither do we. We understand that people have reached out with potential locations and despite what rumors fly around, we do look at each and every location sent to us, and if we feel a location is right for us we follow up, but sometimes it just doesn’t work out. We do have those requirements for properties to be somewhere around 500+ acres with close to 80-100 acres for parking, but there are actually many, many more factors that go into making a facility work.

Between the land requirements, getting in, out and around a venue, schedule timing along with other events, travel pattern, finding a willing landowner and about a million other factors, picking a new venue and just going there isn’t as easy as it sounds. On top of this, the families who own these places genuinely enjoy having us come out and race, and that’s hard to find these days, so always be appreciative to these folks!

Moving on, there’s been an insane amount of silly season changes taking place on the bike side over the course of the last week. So, instead of trying to write one long paragraph explaining each and every one of these, let’s take the names of the Top 20 riders (then a few others we’ve heard about) and fill in what they’re doing in 2023…

1 - Jordan Ashburn: Jordan will be staying put with the Magna1 Motorsports team, and set to defend his 2022 number one plate!
2 - Craig Delong: Craig will also be staying put as Factory Husqvarna announced their lineup with Craig included once again.
3 - Ricky Russell: The first rider on the list to be making a move is Ricky. He’ll be making the switch BACK to Am-Pro Yamaha from Coastal Racing Factory GasGas.
4 - Ben Kelley: Ben will be back with the FMF Factory KTM squad once again in 2023.
5 - Lyndon Snodgrass: Babbitt’s Kawasaki hasn’t posted their 2023 rider list yet, but it sounds like Lyndon will be back on a Kawasaki.
6 - Trevor Bollinger: The other half of Factory Husqvarna’s squad will be back with the same ride in 2023.
7 - Josh Toth: The next big change is Josh Toth who transitions from Factory KTM to the Enduro Engineering backed squad who looks to be riding GasGas machines in 2023. However, it sounds like Josh will be taking the Ryan Sipes route and dabbling in a number of different events in 2023 and will not be focusing on the entire GNCC series, unfortunately for us!
8 - Grant Baylor: Grant is probably the least active XC1 guy on social media, so I think in addition to “Grizzly Grant” his nickname should be the Grizzly Man of Mystery. However, rumors have Grant linked to a possible deal on a Kawasaki, so now we wait and see!
9 - Ruy Barbosa: It looks like Ruy will be back with the Phoenix Racing Honda squad once again!
10 - Ryder Lafferty: Ryder joined the Coastal Racing GasGas folks in late 2021, rode with them for all of 2022 and will be back in 2023 looking to claim the XC2 class championship after a runner up finish in 2022.
11 - Steward Baylor: One of the biggest news breaks was that Steward Baylor would not return to the Am-Pro Yamaha folks in 2023. He made a “thank you” post to the Yamaha folks last week and has to make an official announcement but there’s been a bit of a teaser. Stu (in addition to a lot of guys!) participated in the Terra Inferno Hard Enduro in the Dominican Republic last weekend and was aboard a KTM with Rocky Mountain graphics. He was also sporting MSR gear, which is now Rocky Mountain’s in-house gear brand, so keep an eye out for an official announcement soon.
12 - Liam Draper: The next part of the new Am-Pro Yamaha team is Liam Draper who will be back in the XC2 class, this time aboard a blue bike.
13 - Benjamin Herrera: We haven’t seen anything official on Herrera’s plans for 2023, but he’s still posting videos on social media riding aboard a Kawasaki, so maybe he could be right back in the same spot with the MCS Racing folks in 2023.
14 - Cody Barnes: Another rider back with the same solid program is Cody Barnes. He’ll be back aboard a Phoenix Racing Honda in 2023.
15 - Mike Witkowski: The newest rider on the Phoenix Racing Honda squad will be Mike Witkowski as he makes the transition over after a few seasons on an Am-Pro Yamaha.
16 - Angus Riordan: Aussie newcomer Angus Riordan rode as part of the RPM KTM team in 2022, and while there hasn’t been an official announcement one way or another, speculation is that he’ll be back in the same spot in 2023.
17 - Josh Strang: Another part of the Babbitt’s Kawasaki squad that we haven’t seen an official announcement from is Josh Strang. However, the word on the street is that he’s back on the green back once again.
18 - Jonathan Johnson: A new member to the Factory Beta squad in 2022, there hasn’t been any official team announcement yet but it sounds like Johnson will be back on the Beta in 2023.
19 - Johnny Girroir: Taking over the vacant Josh Toth spot on the Factory KTM team will be Johnny Girroir. After claiming the XC2 title in 2021, Johnny ended up getting hurt at the opening round in 2022 and missed a big chunk of the season. He now has to make the jump to the XC1 class and it will be exciting to see how it all unfolds.
20 - Thad Duvall: Another rider who missed a good chunk of the season was Thad Duvall. But, Thad still has a lot of fight left in him and will be doing so as part of the Coastal Racing Factory GasGas squad in 2023.

Others:
Zach Osborne: Arguably one of the bigger surprises was that the 2020 Pro Motocross 450 champion will be going GNCC Racing full-time in 2023 as part of the Am-Pro Yamaha squad. Zach has made several GNCC appearances over the years and has always wanted to do a full season, it just never really came together until now. It seemed surprising that he would do so aboard a Yamaha since he’s spent his short retirement from professional motocross/Supercross working as a Husqvarna ambassador. However, the split from Husqvarna was on good terms as the Husky team just didn’t have a role for him as a full-time racer while the Yamaha folks did.

Grant Davis: After wrapping up the 250 A class championship, Grant Davis will be making the move to the XC2 class in 2023. After spending the last couple of years riding in the Youth, B and A ranks with the Babbitt’s Kawasaki squad, Grant inked a deal with the Trail Jesters KTM folks to be part of their program as he makes his way into the professional ranks.

Brody Johnson: The 2022 XC3 class champion hasn’t put out any latest news, but chances are you’ll see him back with the Magna1 squad once again.

Layne Michael: On the GNCC front, Layne Michael had a year he likely wants to put behind him. He did have some really solid rides in the US Sprint Enduro series where he finished second place in the Pro class championship, but some injuries and a streak of bad luck hindered his GNCC results. Layne hasn’t shared any info on his plans for 2023, other than the fact that he’s going to become a dad! Word is Layne is working on putting together his own program for 2023, which for many riders proves to give them a little extra push they might need.

Jesse Ansley: Dropping off from the Trail Jesters KTM squad for 2023 is Jesse Ansley. He posted his farewell thanks to the team last week and mentioned that things will be a bit different for 2023, but he’ll be sharing some news soon. So, stay tuned as Jesse just may throw together a really cool deal of his own.

We’ll pick back up with our 2022 recap next week, but that’s actually going to wrap things up for this week’s edition of Quick Fill. We’re knee deep in the final preparations for the banquet, so we’re going to get back to work there and get ready for the weekend. So, enjoy your weekend and we’ll see you at the banquet!