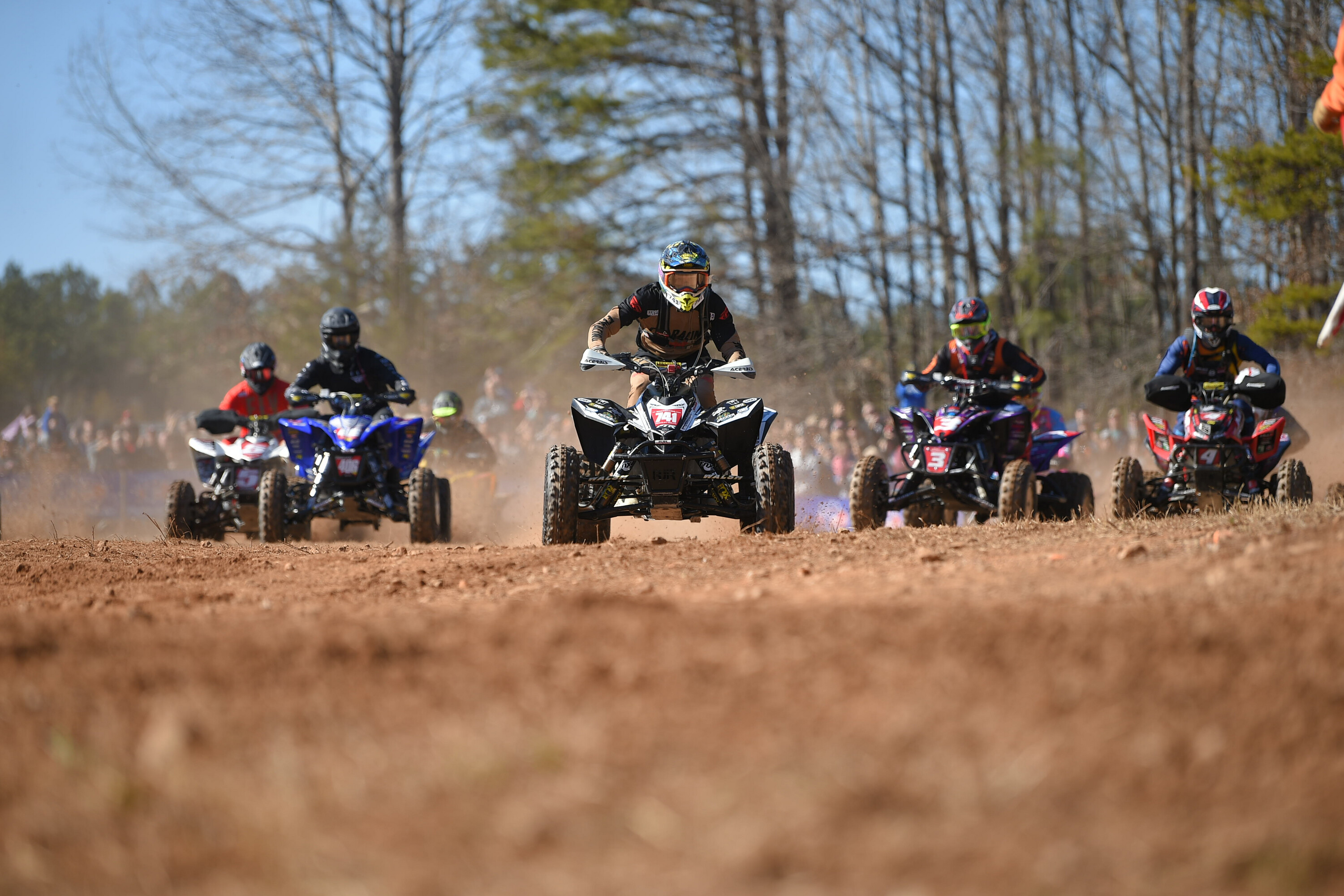 The second full week of 2022 is almost in the books and that puts us another week closer to the start of a new season of GNCC Racing. In some ways it seems like the 2021 season just came to an end, but in other ways it really feels like it’s been longer than 12 weeks since Ironman. Regardless, this time next month everyone will be in a last-minute panic mode getting things together and ready to go GNCC Racing in South Carolina.  Personally, I’m ready for that time to come because to be honest, it’s a whole heck of a lot easier to find things to talk about in Quick Fill when we’re at least close to going racing.

Right now, however, is another one of those weeks where there’s just really not much news floating around the off-road world. But, there is a bit of racing happening down south in some various local series. For those who may not know, 2020 XC3 Champ Zack Hayes started a new GP-style winter series in 2020 and has been doing those events again in 2021 and into 2022. They’re racing again this weekend in South Carolina, but they’ve moved the race day to Saturday in preparation for the potential snowfall. Now, if you’ve ever been in the Carolinas when it snows, you’ll understand exactly why. But if you haven’t, well, let me explain it. I grew up in North Carolina and can fully vouch that even a minimal amount of snow accumulation in the Carolinas (or Georgia, or Tennesse, or Alabama, or others) can result in towns shutting completely down like it’s Christmas Day, roads aren’t well treated, no milk or bread to be found anywhere, cats and dogs living together; mass hysteria!

Anyway, they’re racing this Saturday in Batesburg, South Carolina which is just north of I-20 between Columbia and Augusta. For more information, check out their site HERE. They’ve actually already a lot of pretty good racing so far this winter. New Years weekend they had a double header weekend at Battery Park in Nesmith, South Carolina (only a little over an hour inland from Myrtle Beach) with Cody Barnes taking the AA class win both days. They also raced at Stu Baylor’s Shoals MX back in December with Jonathan Johnson grabbing the win, and another double header at the beginning of December where Layne Michael and Evan Smith topped everyone both days.

Further down south, the Florida Trail Riders series has been in action as well. FTR raced last weekend and saw Jesse Ansley grab the overall win ahead of Alex Lugar and Blake Yahraus, while The Sandman himself, Garrett Edmisten, ended up fourth. Also interesting to hear that Zach Osborne actually raced the morning race, taking second behind another motocrosser, Jack Chambers who is a younger up and coming rider. Zach and Jack actually ran nearly identical lap times, never separated by more than a second at the end of each lap. So, it seems as if Zach was out there helping Jack with some training? Haven’t heard for sure but that sure is how that looks.

There was also a pretty good race among the ATV guys as well. Hunter Hart would lead the race wire to wire to take the overall win while Jay Shadron and Tre Warner battled for the second and third place spots. Brandon Frazier actually ended up fourth, and yes, he was racing his 4x4! Pretty cool to see one of the 4x4 Pro guys get out there and not just mix it up with the Pro class but still do really well while still riding the big 4x4. Great job to all of those guys!

Continuing our recap of the 2021 season, we left off last week with round three in Georgia, so we’ll pick back up with the fourth round of the season at Camp Coker. For the ATV guys, the Camp Coker event wasn’t one of the closer racers of the year, but rather one of those Walker Fowler ‘check out and win’ performances. Walker jumped out to the early lead and controlled it all the way to the checkered flag for the win. It started out as a close battle between Fowler and Cole Richardson as the duo were separated by just around two seconds for about the first half of the race, but in that second half Fowler was able to pull away eventually taking the win a minute and 43 seconds ahead of Richardson.

Coker was also a great ride for Adam McGill. In a non-typical McGill fashion, his ride wasn’t overly flashy but instead was a really solid, consistent ride where he basically held down the third-place spot for the whole race and ended the day on the podium. Jarrod McClure and Hunter Hart would round out the top five with some relatively non-dramatic rides of their own. Interestingly enough there really wasn’t much in the way of riders swapping positions back and forth, it seemed as if these guys settled into a spot and stayed there waiting to capitalize if anyone else made a mistake, but these guys seemed to all do exactly what they needed!

The story of the bike side isn’t a whole lot different, but they did have some lead changes throughout the race. Steward Baylor would jump out to the lead early in the race, but Josh Strang was the man on the mission as he and Baylor would swap the lead back and forth several times throughout the day. Eventually it would be Baylor holding on for the overall win ahead of Strang.

Jordan Ashburn would end up third in the XC1 class while Ben Kelley came from as far back as seventh place on the first lap to end up fourth and Grant Baylor rounded out the top five of the XC1 class. Now, I say XC1 class because Ashburn, Kelley and Baylor would actually finish fifth, sixth and seventh overall, respectively. It was the guys battling for the XC2 class podium who played spoiler to those guys running that high in the overall.

Those guys at the front of the XC2 pack ended up in a race-long battle of their own, which pushed them past some of the XC1 front runners in the overall. Johnny Girroir and Lyndon Snodgrass seemingly had a race-long slugfest, swapping the XC2 class lead back and forth, never separated by more than four seconds until the checkered flag flew when Girroir beat out Snodgrass for the win by just 17 seconds after more than three hours of racing. Craig Delong landed on the XC2 podium in third while Cody Barnes and Liam Draper rounded out the top five of the XC2 class.

From there, the series would head back to Big Buck for the Tiger Run GNCC. It would once again be Walker Fowler taking the early lead, but on lap two it would be Brycen Neal taking over the lead, which he held all the way to the finish for the win. Cole Richardson also made his way around Fowler and ended the day in second place, just ten seconds behind Neal. Fowler held on to round out the podium in third place while Hunter Hart and Chris Borich completed the top five.

Once those guys had settled into their respective positions on lap two, this was yet another fairly calm race down to the checkered flag. Richardson did keep Neal close, never separated by 12 seconds through the entire race but for the most part these guys simply rode a close race, all the way down to the finish with yet again no drama. It almost seems boring to talk about now, but even watching one of the less dramatic races of the season was still incredibly exciting as these guys continue to raise the bar higher and higher.

On the bike side, this time it was Ricky Russell taking over the lead early in the race but by the second lap Steward Baylor had found his way into the lead and held that all the way down to the finish, keeping a little bit of a cushion over Ricky Russell who ended the day in second place while Ben Kelley controlled the third place spot all day, eventually rounding out the podium at the end. Grant Baylor would end up in the fourth-place spot, while Layne Michael notched his first top five of the season.

As for the XC2 guys Mike Witkowski would lead a good portion of the race, but eventually ran into issues that dropped him out of contention late in the race eventually ending the day in seventh. It would be Johnny Girroir working up from fifth place on lap one to take the XC2 class win and at the same time Craig Delong came from the fourth-place spot on the opening lap to end the day in second. Third place would go to Thorn Devlin, which would be his first-ever GNCC podium finish while Ruy Barbosa and Evan Smith rounded out the top five.

The series would then end its southern jaunt and begin to head north, which we’ll pick back up with next week. That’s going to be it for this week’s edition of Quick Fill. We hope you enjoy your weekend and we’ll see you back here next week!