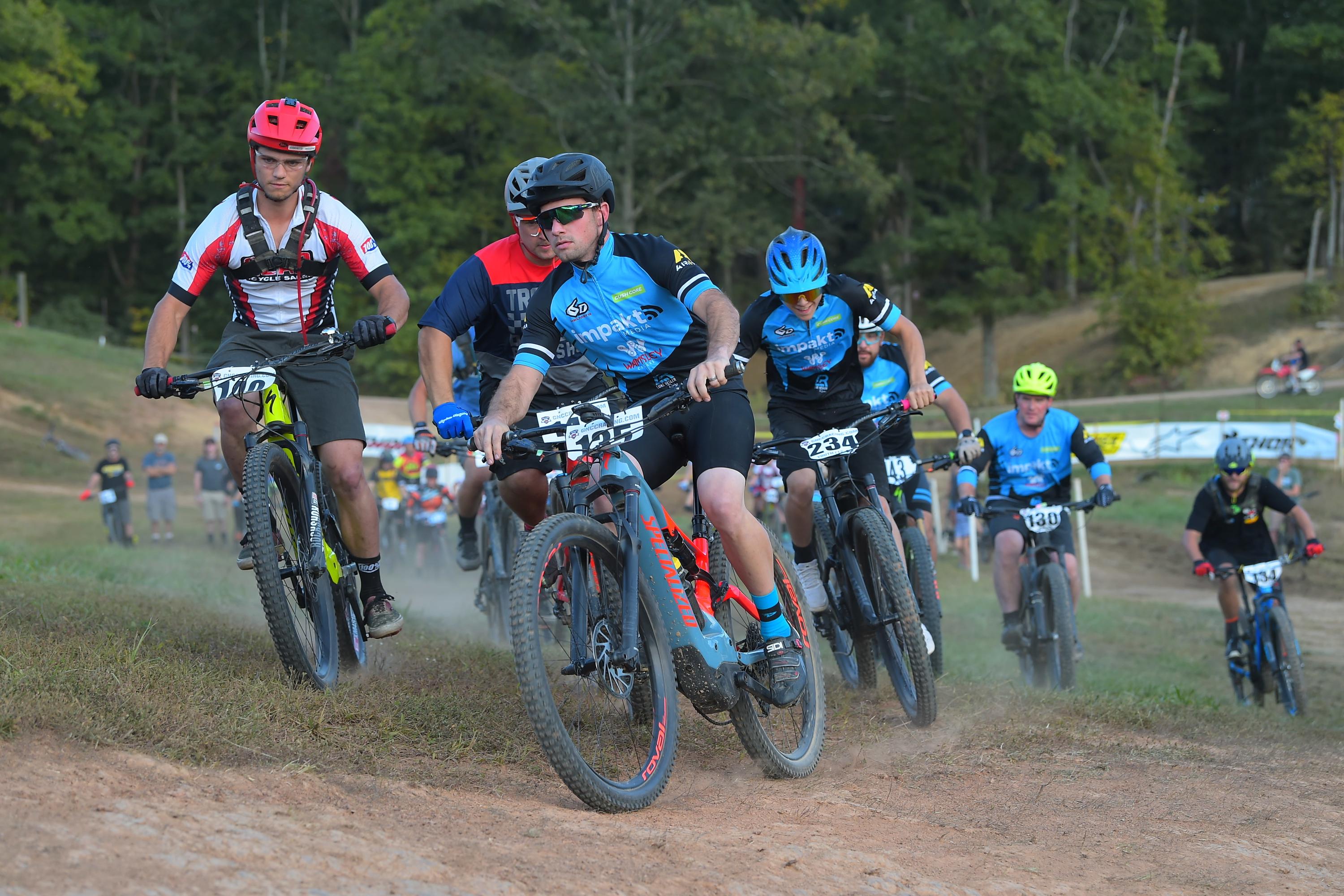 Adam Mayhew busted on the eMTB scene at the end of 2019 with the amateur class win at the final eMTB round. Adam came into the 2020 season to race the series full-time and ended up coming away with the Amateur class championship. We caught up with Adam to learn more.

Hey Adam, how’s everything going today?
Hey Jared, all is well. It's challenging at times, my wife and I have been working remotely since March while homeschooling our two young boys. It's been established our house is not big enough to sustain another virtual year, nor can our WIFI router.

I’m sure you’re not alone there. So for those who don’t know you, tell everyone a little about yourself.
I'm Adam Mayhew, 36 years old and currently living in Fairmont, West Virginia. I'm a husband and a father. My wife Courtney and I have two awesome little boys, Brayden and Maddox.

And what do you do for a day job?
While I truly enjoy my day job and the people I work with, most would agree it sounds pretty boring. I'm currently a production planning manager for a pharmaceutical company. However I can definitively say that's coming to an end this year, so for anyone looking for a supply chain professional, you know where to find me 8 of the 13 rounds.

Well hopefully someone reads this and needs your expertise! How did you get started racing?
I haven't been racing long at all, maybe 8 years. I bought a dirt bike while my wife was on vacation visiting her mother and started racing a local series. I really wanted to compete and chase a GNCC title but couldn't make it happen on a dirt bike. For me, I just couldn't get the required seat time in to feel like I was progressing in the sport. You could say I ran out of talent (laughs)

What made you transition from a dirt bike to an eMTB?
There were periods of breaks but for the most part cycling or just being on a bicycle has been a part of my life, it's something I've been passionate about, so making the transition from dirt bikes to eMTB was easy. My family really enjoys the series, we look forward to it each year, we have a blast so we're really happy GNCC has made eMTB racing a focus.

Other than the obvious difference of having a combustion motor, what are the biggest differences between racing a bike and an e-bike?
For me, it's knowing your body's limits. Knowing when and how long you can push and how long it takes your body to recover. There's really no secret, you either have the legs or you don't.

There’s a lot of strategy involved on both, but was it difficult to adjust to the different strategy on an eMTB?
No, not really. Just ensuring you and your machine are ready.

You had a pretty stellar 2020 season. Tell us how it went.
Yeah, it was an awesome season. I raced the final round in the 2019 season, had a blast and won that race so I was really looking forward to the 2020 season. Our first round was The General and the team was really excited to get the season started. I had a solid race going, leading all but the last few minutes. I tried to make the pass right before the finish but couldn't get it done so I finished 2nd in the Amateur class and 10th overall. I'm pretty sure shortly after that round 2020 came at us hard and I missed the next race. Getting back to racing, I won the next two rounds. Then we were off to Loretta Lynn’s. The track layout was perfect and I felt like it benefited my abilities however it was a day filled with mechanical issues, like much of our group, and frustration. That was my worst finish of the year but still respectable and kept me in title contention. On to The Mountaineer, I rode a rear flat for the entire race (insert Cushcore plug here) but managed to battle with Connor [Karkowsky] and Canon [Kuneff]], finishing 2nd and again 10th overall. I think this was the point things really heated up. The next round was Burr Oak and I suffered the entire race, simply did not have the legs but finished 3rd and 7th overall. Mason-Dixon being the final round and knowing the winner would be class champion; preparation, poise and confidence were key in securing the win. The first lap was quite the battle between Connor, Canon and myself. After getting that first lap in I made a few passes and took the lead. Rode a consistent race, extending my lead each lap and securing the win. It was an awesome feeling.

It was a tight battle but how did it feel to come out as class champion?
Wow, no kidding. I don't think it could have been any closer or more stressful, especially leading up to the final round. At that point, it was basically a one-race series and the winner takes all. It was an amazing experience and even better feeling. Can't say enough about Connor Karkowsky and Canon Kuneff, two very tough competitors, both very talented.

Was there a certain point where you were able to really say “alright, I’ve got this thing in the bag”?
Although I had a solid lead in the final laps, I can honestly say it wasn't on my mind until I was out of the woods and could see the finish.

So what are your plans for 2021?
Glad to be coming back for another season with the team. I'll be racing XC1. I know everyone has been working hard and I've been doing the same.

What kind of goals do you have for the future?
Be competitive in the XC1 class, make a few podium appearances and finish the year in the top 5.

Alright, before we wrap this up, who would you like to thank?
My wife, Courtney, for her support and dedication. She takes it just as serious, pushes my progression and calls me out when I'm being lazy. Luke Nesler for assembling such an amazing team and asking me to be a part of it. I have to thank Colin Dierman, he's been a major influence from my first race in 2019 to the upcoming season. Everyone on our team and all of our sponsors including Impakt Media, Wamsley Cycles, Cushcore, Arma Nutrition, Peaty's Products, The Moto Brand, 6D Helmets and Polar Fitness. A special thanks to the Kuneff family for their support and hospitality, especially during the race season. Lastly thank you to the entire GNCC staff from the front office to the track crew, the people appreciate your dedication to the sport. We know last year was difficult to manage but you exceeded our expectations.