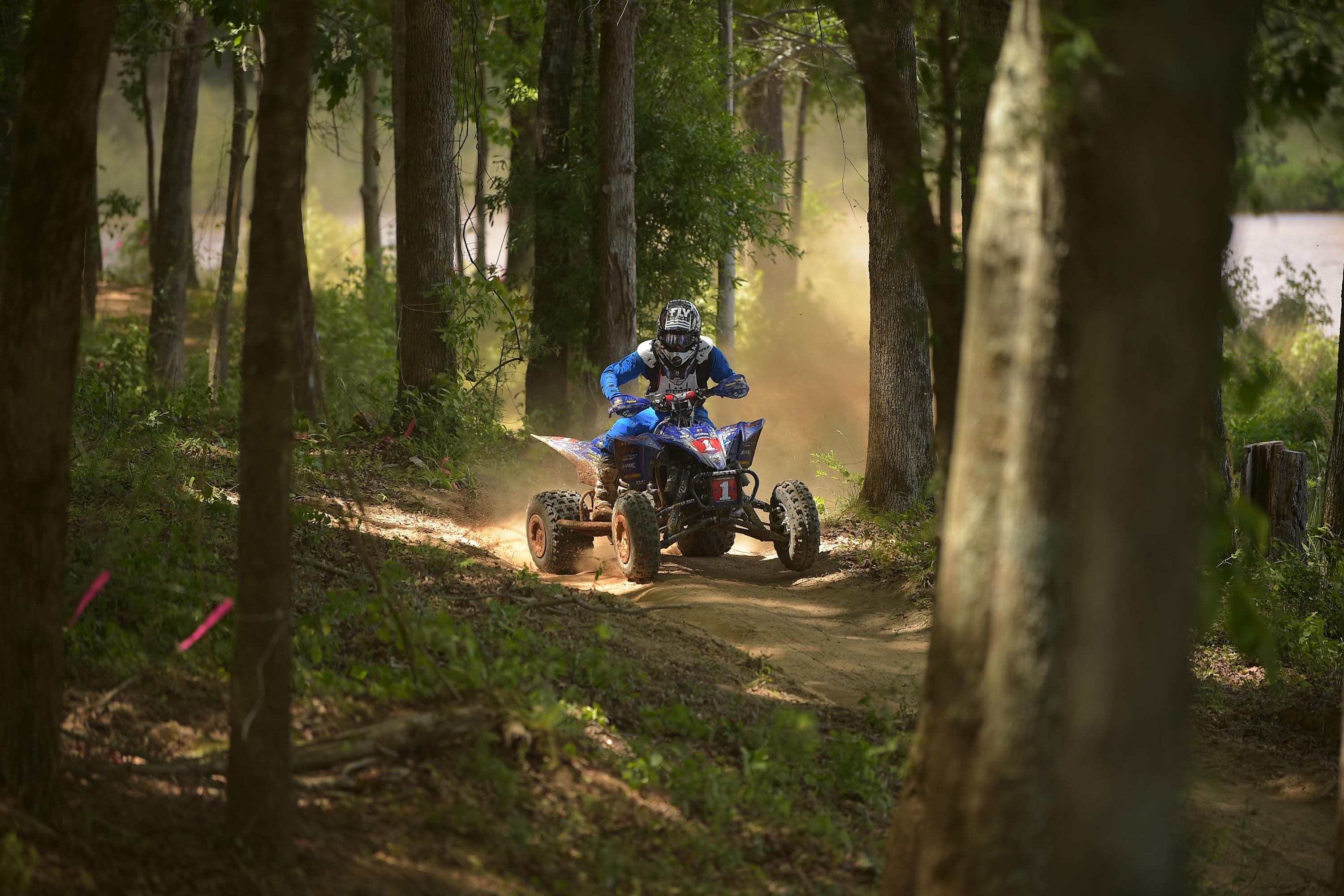 What a weekend! It was so great to get back to the track and go GNCC Racing last weekend in Georgia. The Bulldog GNCC was definitely no re-do of The General, even though they were held at the same location. This time around, the Aonia Pass MX facility felt totally different and the course was a good bit different. We were able to route portions of the track through some areas that typically have standing water in them when we’re here in March. We also cut in a few new sections of trail, and ran through some other sections that haven’t been used in quite a few years. It turned out to be really fun, and produced some exciting racing as well.

Saturday’s ATV race would see Walker Fowler grab his fourth win in four rounds, but Cole Richardson was on a tear! Cole came from eighth place on the opening lap to end the day in second place, and Hunter Hart was actually right on Cole’s heels in third place. Brycen Neal and Adam McGill both rode in podium positions at some point during the race, and to watch these guys swapping positions battling for the podium was a great way to get back to racing.

It also could be a sign of things to expect in the next few rounds. While these guys are all chasing Walker, they could very well end up pushing each other to the limits and find themselves battling for the win instead of podium positions. There’s no doubt that Walker is the guy to beat right now, but if those other guys can link together and push the pace a little further, we could see some of the most intense battles we’ve seen in quite some time.

The same can be said on the bike side, and it actually happened. Kailub Russell had jumped out to a bit of a lead early in the race, but Ricky Russell and Josh Strang put on a push late in the race to challenge Kailub down to the wire. In fact, Ricky had actually made the pass for the lead, gotten passed back and was trying another pass when he suffered a pretty hard crash.

Ricky and Kailub tried to occupy the same space at the same time between two tight trees, and Ricky would end up clipping the tree hard enough to break his handlebars. On the way down, Ricky’s inner thigh snagged those handlebars and he would actually tear his femoral artery! If you don’t know, the femoral artery is the main blood supply to your leg and you can actually bleed out if you don’t catch it quick enough. Thankfully, the track and medical crews were able to get to Ricky quickly, get him out of the woods and treated.

Ricky updated on Tuesday saying that he’s expected to make a full recovery and that he “gets to keep his leg” which actually sounds kind of scary! It’s a real bummer for Ricky because he war riding incredibly well and he had a serious opportunity to challenge Kailub for the win. We’re all thinking about you Ricky and hope to see you back out there soon!

Of course, we can’t take anything away from Josh Strang either who kept Kailub in his sights all the way to the finish and ended the day in second place, just around two seconds behind KR. Josh has been riding really well all season and at this point, with the motivation of a few great rides recently, Josh very well could be Kailub’s biggest challenger in the coming rounds.

Speaking of coming rounds, it’s officially official (yes, I said that) that we’re headed to Camp Coker next weekend. It was announced earlier this week, and the website has been updated with the information. Camp Coker will be co-sanctioned with SETRA as originally planned, but we’re also welcoming in the folks from the AMA East Hare Scrambles Championship as well.

If you’re not familiar with the AMA East Hare Scrambles, it’s what we would historically know as the AMA National Hare Scramble Series. The first ever AMA National Hare Scramble took place at High Point Raceway back in 1979 and for many years ran in conjunction with many GNCC events. In 2008, the series was split into an East and West series and for the past several years Keny Held out of New Jersey has been managing the AMA East Hare Scrambles. The series is obviously no stranger to GNCC, but it’s been a number of years since we’ve seen an AMA East/GNCC co-sanction, so it’s really cool to see these guys back and great that they’re able to return to racing as well.

So, everyone get geared up for the Camp Coker Bullet! If you’ve never attended this event before, you’ve really missed out because this is a beautiful piece of property and a really fun racecourse. It’s sandy, but it’s nothing like the deep sand we race at the Wild Boar in Florida. Camp Coker has more black dirt mixed in with the sand, which means it doesn’t get quite as rough but it’s still no cakewalk! The course also tends to have some tight areas for both quads and bikes, and then you have to transfer across the property in a couple of big grass track sections.

There’s also the defunct Camp Coker Motocross track, which was a pretty popular motocross track in its day. When we had Travis Pastrana on Behind the Bars to discuss the 2008 Triton GNCC, he wanted to work up a rematch between himself, David Knight and Garrett Edmisten for the 2021 running of Camp Coker. The guys started talking about the motocross track and Travis actually said that Camp Coker was one of his all-time favorite motocross tracks. That’s pretty darn cool to hear!

That’s almost going to do it for me this week. We’re gearing up for another event at Aonia Pass this weekend as we welcome the ATV Motocross National Championship. This event was originally slated to take place at Ironman, but it was moved to Aonia Pass once The Bulldog was confirmed, so we stuck around to make sure everything goes as smooth as possible.

Before I wrap it up though, big shout out to Steward Baylor for running the GNCC Instagram story this weekend. Stu did a great job keeping everyone updated and showing some really cool behind the scenes stuff as well. Thanks for the hard work Stu, it was really cool to see and everyone I heard from really enjoyed your take on the weekend... Oh, and yes, thanks for keeping it PG!

Enjoy your weekend and we’ll either see you for next week’s edition of Quick Fill, or at Camp Coker next weekend!

Well, we done it and done it good! The Bulldog GNCC was a success and it appears we have everything in order to head to South Carolina for the Camp Coker round, which is a favorite location as the fishing and swimming really lend a hand to this vacation atmosphere.

The feeling heading back to Georgia was one of the weirdest feeling, almost awkward events I’ve ever attended. It was sort of like returning to the scene of a crime. When we all left Aonia Pass near two months ago, the intensity of worry over the virus was growing rapidly as we rolled out and headed home. The talk of that race was all about the virus and our varying opinions about it. The country was shutting down around us, as the angst over just how things would play out was very uncertain. Here we were all gathering again at the same location to pick up where we left off, albeit with some changes.

As for the racing itself, it seemed like we were at a totally different event as the crew did a great job of making changes to keep things fun and rerouted enough that the same dirt we chewed at the original race wasn’t the same as this time around. Walker Fowler once again dropped the fire on the XC1 class and streaked off to earn himself another win and was joined on the non-existing podium with Hunter Hart and Cole Richardson. I say non-existent because the podium was there in spirit but no real podium celebrations took place. You wouldn’t think this would be a big deal but chasing the riders down was a new experience and seemed to give the after race report a new vibe. Much like the podium, my poor hearing left me clueless as to the specifics but it wasn’t hard to see the drain on the rider’s faces as we stalked them in the pits and the smiles from those that met their goal and had a good day.

Saturdays are insane with so many races on the track, from Micro to eMTB the day rolls on in a hurried pace as riders are continuously scurrying about. Although relentless, the day proved again to be one of great racing especially the eMTB event. I am not sure what it is about Aonia but the eMTB course just feels right and makes for a fun event. The day’s hustle leaves Sunday feeling light with only three races so catching your breath is possible and as good as the weather was it was another epic day of racing.

That’s about it for me this week as I prepare to go right back to Aonia Pass for the ATVMX race this weekend. I know everyone joins me in wishing Ricky Russell a huge get well soon as his dirt sample on the last lap proved to be very serious and landed him in surgery to repair the damage. His crash and subsequent recovery takes another top rider off the field of battle for the foreseeable future possibly allowing Kaliub Russell some room to enjoy his finale full season of GNCC racing unless someone else rises up to give him a fight in the fields and woods! As always, may the good Lord continue to bless us all and keep us as safe as possible, see you all at Camp Coker!