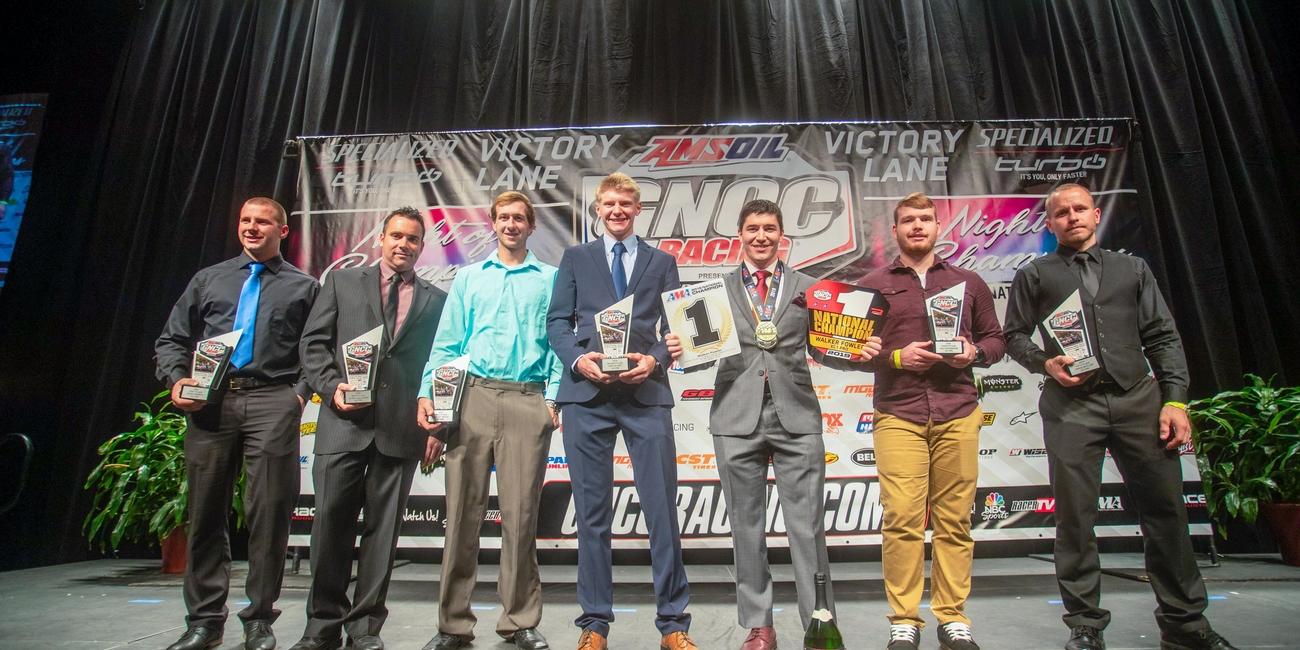 MORGANTOWN, W.Va. (December 10, 2019) – With the 2019 AMSOIL Grand National Cross Country (GNCC) Series presented by Specialized, an AMA National Championship, complete, the annual GNCC Night of Champions took place this past weekend, December 6 and 7, at the Morgantown Marriott at Waterfront Place in Morgantown, West Virginia. Over 1,300 racers and family members from all over the country came together to celebrate the prestigious accomplishments of the top 10 racers in each championship class.

After opening ceremonies and dinners on Friday and Saturday evening, the Masters of Ceremonies, Rodney Tomblin and Mikey Waynes took to the stage to honor each championship class. In addition, a handful of specialty awards and recognition of series sponsors and supporters took place. The best ATV and eMTB racers were honored in front of about 600 people on Friday evening, while over 700 attendees filled the room Saturday evening to honor the top motorcycle races in the series. For a full list of 2019 GNCC champions please click HERE.

The president of KTM North America Inc., John Hinz, was in attendance Saturday evening to support the series and KTM-backed riders. Hinz was presented the Manufacturers Cup, which was awarded to KTM North America for the motorcycle discipline. Yamaha Motor Corp. was awarded the Manufacturers Cup on Friday evening for the ATV discipline. The Manufacturer Cup is presented to the OEM with the most points awarded throughout the year from their two (2) highest placed overall finishers at each round.

Specialized took home Sponsor of the Year honors for their new role as the Presenting Sponsor, while also becoming the title sponsor of the newly-formed Specialized Turbo eMTB GNCC National Championship Series. Earlin Rosa, Eastern Turbo Channel Developer for Specialized, was on-site to accept the award. Rosa also presented Specialized eBikes to Charlie Mullins for his eMTB XC1 Pro Championship, Kevin Yoho and Simon Johnson for their Amateur of the Year accomplishments, and also to Justin Ison and Tanner Collins, who were randomly drawn as two additional winners.

A full list of the 2019 Specialty Award Winners can be found below:

For the seventh year, Rocky Mountain ATV/MC returned with their Ticket to Ride program. Four lucky winners received a paid trip-for-two to Moab, Utah for a riding expedition with the Rocky Mountain ATV/MC staff to take place this upcoming spring. A congratulations goes out to Friday night’s winners, Michael Relyea from High Springs, Florida and Robbie Pecorari from Aston, Pennsylvania, who will be provided with Side-by-Side machines on the trip. Saturday night’s winners, Matt Sorge from Atco, New Jersey, Chase Colville from West Sunbury, Pennsylvania and Ryan Echols from Fairmont, West Virginia will be provided motorcycles on their trip in the spring.

Immediately following the awards, musical entertainment was provided by DJ ELO, as GNCC Racers and their families continued the celebration on the dance floor. GNCC also provided a free photo booth to capture the evening’s festivities, as well as a kid-friendly Fun-Zone right outside of the banquet room including an inflatable three-person bungee race and life size Connect Four.

For those racers unable to attend the GNCC Banquet, awards can be obtained by filling out the GNCC shipping form HERE. Racers will be responsible for the cost of shipping and handling prior to shipping the award, and request can be made until December 31, 2019.

The 2020 Grand National Cross Country Series presented by Specialized, an AMA National Championship, will kick off with the Big Buck GNCC in Union, South Carolina the weekend of February 22 and 23. The full 2020 schedule will be released at a later date.

The Grand National Cross Country Series presented by Specialized is America's premier off-road racing series. Founded in 1975, the 13-round championship is produced exclusively by Racer Productions. Cross-country racing is one of the most physically demanding sports in the world. The grueling three-hour GNCC races lead as many as 2,400 riders through tracks ranging in length from eight to 12 miles. With varied terrain, including hills, woods, mud, dirt, rocks, and motocross sections, GNCC events are tests of both survival and speed. The series draws talent from all over the U.S., Central America, South America, Europe, Japan, Australia, and New Zealand. GNCC Racing is televised on RacerTV.com, with highlight shows posted after every round of racing. For more information, please visit www.gnccracing.com.