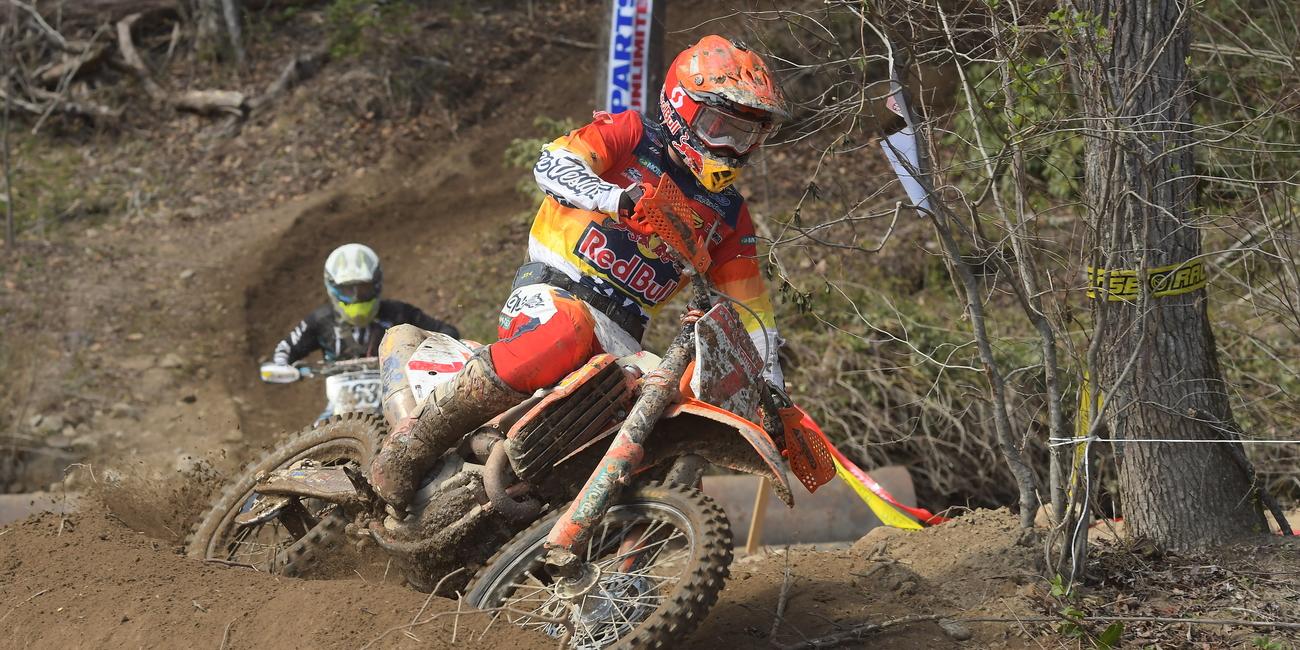 Despite a shoulder injury forcing him to sit out the last round and pull in early at the Mountaineer, Kailub Russell was able to win his seventh GNCC XC1 title! The 29-year old from Boonville, North Carolina may be finished with GNCCs for the season, but in a matter of days he will be headed to Portugal to represent the USA in the International Six Days Enduro.

GNCCRacing.com: Congrats on winning the 2019 XC1 title! How does it feel?

Kailub Russell: It’s really cool to be able to wrap up my seventh title. You know, seven in a row is absolutely insane sounding, even to me. I’ve only been in the class nine years now, and to win seven out of nine championships in the XC1 class is a huge achievement. You know, I always wanted to win, but I never knew I’d go on to win this many times.

Yeah, that is an amazing achievement, for sure! Given that you have won so much, do the individual race wins and titles start to blend together after a while, or are there some that still really stand out to you?

Yeah, there are still a lot of wins and championships that stand out more than the others. I mean, with each title I kind of had a different struggle or battle that I had to overcome. They’re each pretty special, obviously. At this point I’m taking it year by year – it would be hard to go from winning this much to losing, so we’re doing everything we can to stay on top!

So, you mentioned that each season had its own challenge that you had to overcome to come out on top …. what would you say that struggle was this season?

This season was really one of my best I’ve ever had results-wise, at least up until the summer break. The major hurdle for me this year, other than Thad [Duvall] riding really well this year, was that I came in just after having a shoulder operation during the off-season. I took it for granted a little bit, assumed things would be normal, and didn’t really realize how much that surgery took out of me physically. It was a pretty big ordeal and it took some time for me to get some normality back. There were a lot of complications with it during the season, especially the beginning part. I did a really good job of managing it throughout the season, until right there at the end. I finally made the mistake I’d been avoiding, and it really bit me.

When you started talking about it, I was wondering if this was the same injury that caused you to sit out Ironman. How did you end up re-injuring your shoulder, and what are you doing to try and get it ready to go for Six Days?

I wouldn’t really say re-injured, exactly, because I don’t know the extent of the damage. I haven’t gone to get it checked out because even if it is a little torn instead of just aggravated, there isn’t anything they can do to repair it on this short of notice. I had surgery on it last year because my labrum was completely detached. I ended up getting bursitis and tendonitis built up in it when I came back and started to ride in January and February. Some of the muscles had kind of died off because they weren’t rehabbed correctly, and it was causing my shoulder to swell up and become painful during the week. I started doing PT and was able to get everything squared away. Then at Mountaineer I caught a root wrong coming out of a turn and shoulder-checked a tree with that bad shoulder hard enough it knocked me completely off the bike. Just blasted me off the back of the bike, the bike looped out …. it was enough to re-aggravate the entire thing and start me back over at square one.

In that case, do you still plan on going to Six Days or will the team try and find a replacement rider for you?

The whole reason for me pulling off at Mountaineer and then sitting out Ironman was the goal of being ready for Six Days. I mean, I could ride, but an hour and a half or so in it would start to weaken and become hard to ride – that shoulder is only at about 50% strength. So, there was no real point in racing those last couple GNCCs and causing it to deteriorate even more. I’ve been doing my PT and I think it will be okay for Six Days. The GNCCs are just so physically demanding for such a long period of time, I would be putting myself at risk of falling and injuring it or something else. The risk just wasn’t worth the reward.

Especially since you already mathematically had the title.…

Yeah, there’s a big emphasis on Six Days and since I already had the GNCC title, I didn’t want to have something go wrong. We leave in three days and it might really put the team at a disadvantage if they had to try and find a last-minute replacement for me.

And on the bright side, at least at Six Days you won’t have three-hour special tests! (laughs)

Yeah, exactly (laughs). It’s just managing day three and four that I think is going to be the trick. You do have really long days on the bike, but since you are really only riding hard for forty-five minutes to an hour each day I feel like I can manage it.

Best of luck to you and to the rest of the team as well! Now, moving on to some questions that are a little more fun, what made you want to become a pro rider in the first place?

I’ve said this before, but I can’t remember a time where I ever wanted to do anything else but race a motorcycle. Obviously, I grew up around this – my dad was still racing when I was about Krue’s age and at my most impressionable. I remember wanting to be like my dad and always being around the races, so maybe it was inevitable. I mean as I got older … like I wasn’t the best minibike rider, by any means, but I didn’t let that deter me from thinking this was what I was going to do. I just kind of willed myself into the position I’m in and never let anything distract me growing up. I was only focused on one thing. (laughs) It didn’t matter to me what team, what bike or anything like that, just that one day I was going to race a motorcycle for a living.

What racer did you look up to the most when you were growing up? Was it just your dad or were there others?

When I was really little it was definitely my dad. But of course, he stopped racing in the mid-90s. So after that, it was Rodney Smith and Shane Watts that I looked up to the most, plus Barry Hawk too. But especially Shane Watts. I also really looked up to Ricky Carmichael, I would say he had a pretty big impact on my life and career.

What do you feel like was one of the biggest obstacles you had to overcome in the course of your career?

As a mini rider, I felt like I was always at a deficit from everyone else, because I didn’t have the same family support. Most people take it for granted being able to have your parents come down to the line with you and support you during your race. This is such a family sport and having them there for you is the norm, but that was never really the case for me. Because my family runs the series, they felt like it was important for them to keep their distance so it didn’t look like they favored me over the other riders or give people a reason to diminish my accomplishments because of my family ties. In a sense, I had to build up this myself, even more so than your average rider does. It was especially hard as a kid because I didn’t really understand why they couldn’t be there with me like the rest of the parents were.

Tell us about a funny or interesting that happened to you at or on the way to a race.

I don’t have many stories from GNCC because it’s so business-like for me. I drive to the race, I compete and then I leave. Now, at the ISDE it’s a different story. We’ve had a lot of good times and great memories made. You put eight or ten guys together in a couple rental cars, its going to get exciting! Viewer discretion may be advised on some of those stories, so I better not repeat them here though. (laughs)

Do you have any kind of pre-race routine you go through before the start of a race?

Not really. I’ve never really taken much time to do anything like that. I feel like if you’re worrying about that, you’re not focusing enough on the race.

What do you think you’ll do when you retire from racing?

It.. well.. it’s kind of up in the air right now, we’ll put it that way. I am in the stages of trying to line some stuff up, you know, get myself prepared for when that day comes. But it’s all still taking place on a very basic, preliminary level. I’ve got some options and I’ve got some ideas in my head, and we’ll see. The end is closer than the start, I can tell you that for sure.

And then what are your plans for next season?

For next season it will  be pretty much the same as I had for this season. I’ll be racing GNCCs and Sprint Enduros, and then we will see about Six Days. It’s at kind of a goofy time in the year and it may be hard, logistically speaking, for me to be there. So, there is still a little bit to figure out, but at the end of the day I will for sure be doing GNCCs and Sprint Enduros.

Thank you for taking the time to do this interview! Who would you like to thank?