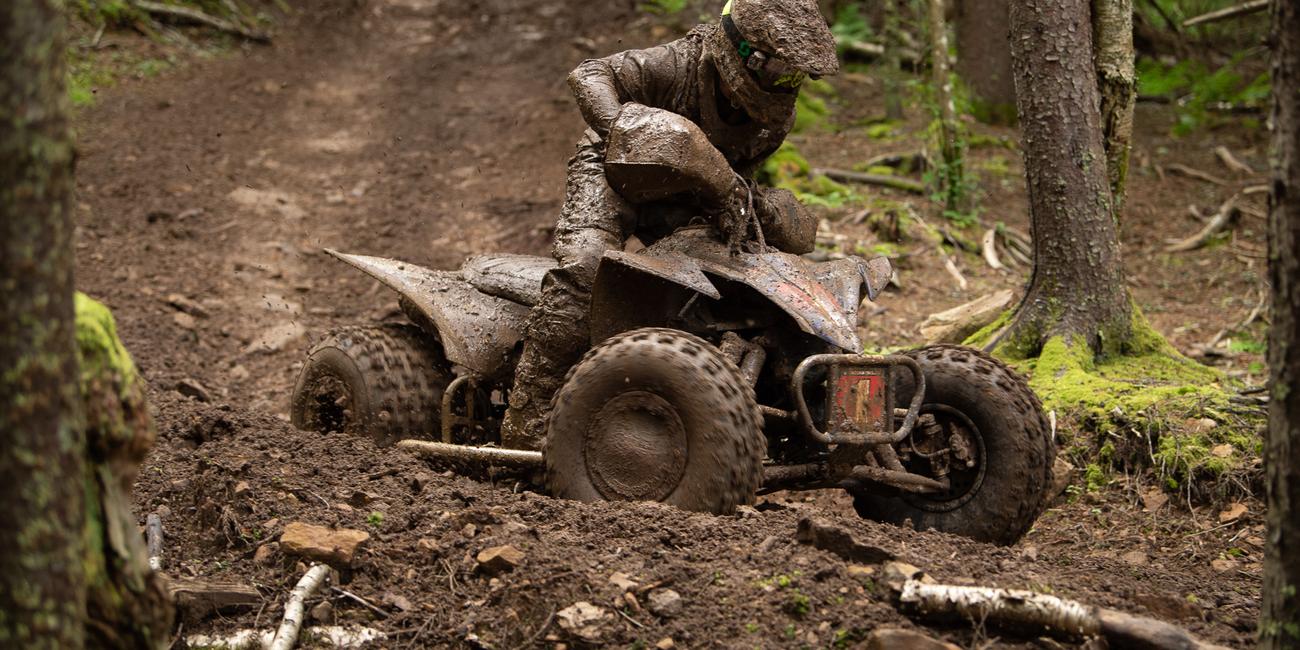 As riders began to grab their spot on Snowshoe Dr. for the traditional “Blackwater 100” style start, a brief rain shower began to fall. This race is considered one of the toughest races on the circuit, with some of the most spectacular views. Walker Fowler would be the first to jump out and grab the early lead as he came through in the lead on the opening lap. As the race wore on, he would continue to grow a sizeable gap on the rest of pack. Brycen Neal would have his work cut out for him throughout the 2-hour long race. However, around the halfway point Neal found himself in fifth and pushing to get to the front.

Chris Borich was having a very consistent day in West Virginia, battling through the pack to make his way to the front. Borich continued to push and tried to put a late race pass on the front-runners. Jarrod McClure was having a good race, running in second on the fourth lap. However, after receiving pressure from behind on the last couple of laps McClure would not have enough time to remount and push for the podium position. On the start Adam McGill would get a great jump coming into the woods first, however he would fall back to second behind Fowler for the first three laps of the race. McGill would eventually move back to the fifth place position.

Make sure to check out and/or set your DVR for the show on NBCSN this Sunday so you can relive all the great racing, see what fully happened at round eight of the 2019 GNCC Series in Snowshoe, West Virginia.

GNCC LIVE continues with coverage from each ATV and bike pro races for a total of 26 live racing programs online at RacerTV.com. Race fans and family members can watch their favorite professional and top amateur off-road racers compete for the win at each round throughout the season, and keep up-to-date with their quest for the 2019 National Championship.

Use the NBCSN channel finder to determine the channel for NBCSN in your area.

The AMSOIL Grand National Cross Country Series presented by Specialized is America's premier off-road racing series. Founded in 1975, the 13-round championship is produced exclusively by Racer Productions. Cross-country racing is one of the most physically demanding sports in the world. The grueling three-hour GNCC races lead as many as 2,400 riders through tracks ranging in length from eight to 12 miles. With varied terrain, including hills, woods, mud, dirt, rocks and motocross sections, GNCC events are tests of both survival and speed. The series draws talent from all over the U.S., Central America, South America, Europe, Japan, Australia and New Zealand. GNCC Racing is televised weekly on NBC Sports and RacerTV.com. For more information, please visit www.gnccracing.com.

Racer TV and NBC Sports Network (NBCSN) are the official homes for coverage of the AMSOIL Grand National Cross Country (GNCC) events. All 13 rounds, from the season opening Big Buck GNCC in South Carolina to the finale at Ironman Raceway in Indiana, will air in 30-minue; taped-delayed telecasts on NBCSN, while Racer TV provides live streaming coverage of the 1 p.m. ATV and motorcycle races from each event. Catch all the action at http://www.nbcsports.com/ and http://www.racertv.com/.