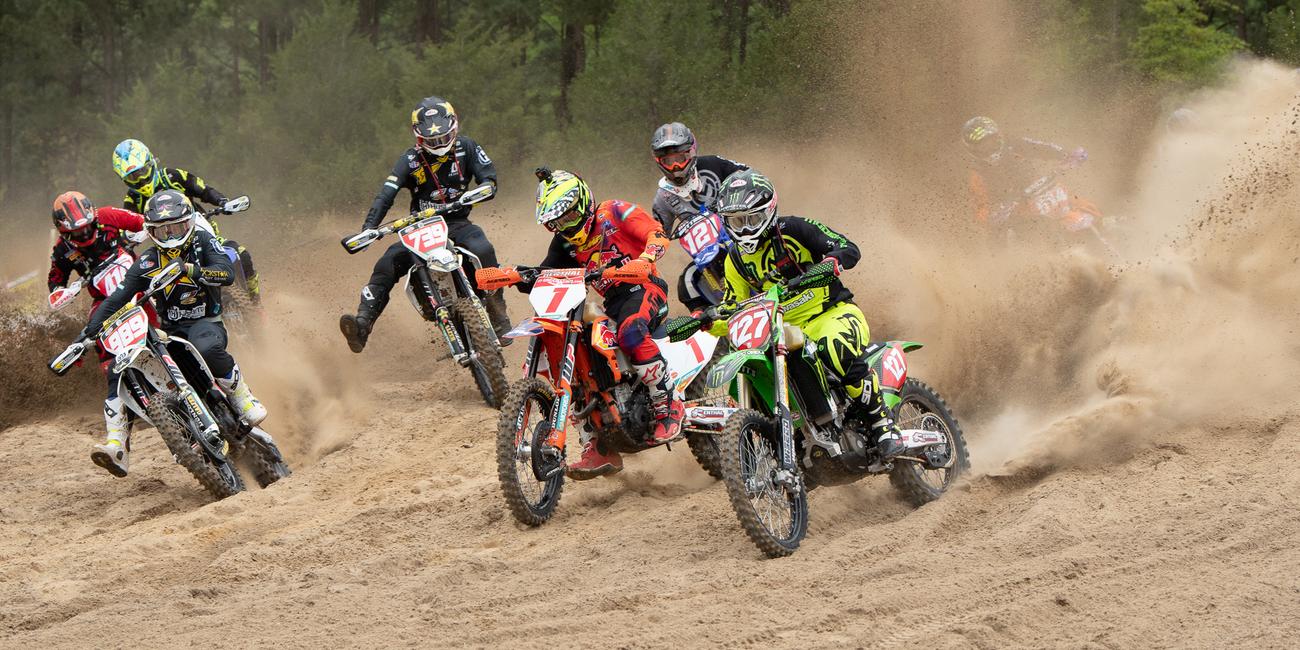 SOCIETY HILL, S.C. (April 15, 2019) – Round four of the 2019 AMSOIL Grand National Cross Country (GNCC) Series presented by Specialized, an AMA National Championship, took place at Moree’s Sportsman’s Preserve on Sunday, April 14. As the green flag waved, signaling the start of the 1 p.m. pro race, the rain made a brief return as the riders navigated through the woods and rain during the opening lap.

Getting a great jump off the line was Babbitt’s Online/Monster Energy/Kawasaki’s Jordan Ashburn, as he made his way to the second turn first earning himself the $250 All Balls Racing holeshot award. However, it would not take long for FMF/KTM Factory Racing’s Kailub Russell to make the pass for the lead. Russell was able to put his head down and push, putting a gap on the field during the first half of the race.

As Russell maintained the lead, he soon found himself being joined by Rockstar Energy/Factory Husqvarna Racing’s Thad Duvall. After a mid-pack start, Duvall would find himself coming through timing and scoring on lap one in the sixth place position. But just as the rain stopped, Duvall would begin to charge through the pack working his way up to third and then second by lap three.

Russell and Duvall would swap the lead position multiple times throughout the second half of the race, and a mistake on the final lap by Russell would allow Duvall to close the distance between the two. As the duo battled through the pro pits making their way to the finish line, it would be Russell taking his second overall win of the season by only one-second over Duvall.

Tely Energy Racing/KTM’s Steward Baylor Jr. also started the race buried in the pack of XC1 Open Pro riders. Still, Baylor Jr. would continue to charge through, making his way up to second by lap two, and after a brief battle with Duvall would find himself in third overall. Baylor Jr. would remain in third overall, rounding out the overall podium in his home state of South Carolina.

During the first lap of the race, Rockstar Energy/Factory Husqvarna Racing’s Trevor Bollinger would find himself at the front of the pack running in third. But with his teammate Duvall and KTM’s Baylor Jr. on a mission, Bollinger was already back to the fourth place position on lap two. Bollinger would put in a consistent ride all day, ultimately finishing fourth overall.

Babbitt’s Online/Monster Energy/Kawasaki’s Josh Strang had a great start to the day coming through second overall on the opening lap. The rainfall would stop, and the pro riders would mount their charges for the front of the pack. Strang would manage to hold onto a fifth overall on the day.

Putting in his best race of the season thus far was Phoenix Honda Racing’s Andrew Delong. This season Delong has been finishing inside the top 10, and this race was no different as Delong was going for a top five finish. As the race wore on, Delong would find himself sixth in the XC1 class and seventh overall. When the checkered flag flew, Delong would finish out the day with that sixth in his class.

After grabbing the holeshot Ashburn found himself coming through scoring in fourth. With a lot more racing ahead of him Ashburn would find himself engaged in multiple battles with Delong for the sixth place position. When the checkered flag flew, it would be Ashburn coming through seventh in the XC1 Open Pro class.

FXR/Husqvarna/Hoosier’s Layne Michael made his way back after being forced to end his race early at the previous round in North Carolina. Michael had a consistent day and would finish out ninth overall. AmPro Yamaha’s Cory Buttrick had his third consecutive top 10 finish in the XC1 class this past weekend. Buttrick would come through ninth in his class.

Traders Racing/FXR/Club MX’s Josh Osby and Tony Archer came out and joined the XC1 Open Pro class for today’s Camp Coker Bullet GNCC. Osby and Archer would finish the day 10th and 11th in the class. FMF/KTM Factory Racing’s Josh Toth was running sixth, but was forced to end his day early after a crash on the fourth lap.

In the XC2 250 Pro class it was Trail Jesters KTM’s Ben Kelley earning his fourth-straight win of the season. However, after a dead last start Kelley had his work cut out for him. As the riders made their way onto the second lap, Kelley was already pushing for the lead behind Tely Energy Racing/KTM’s Liam Draper. Draper grabbed the early lead after LanMills XC/Husqvarna/Moose Racing/FMF’s Alex Teagarden earned the $100 Hot Cams holeshot award.

Kelley would make the pass on Draper stick, and continue to put a gap on the field, putting in the work for his fourth-straight XC2 class win. Beta Factory Racing’s Michael Witkowski found himself within the top three when the race started. Witkowski would battle throughout the day, and as the checkered flag waved he would earn his best finish thus far in the season with a second in XC2. Phoenix Honda Racing’s Austin Lee would round out the XC2 podium, after working his way through the pack. This is also Lee’s best finish of the season.

One rider absent from the XC2 250 Pro rider list was Trail Jesters KTM/MCS Racing/SSR Rider Development’s Jonathan Girroir. It was posted earlier in the weekend that Girroir would not be lining up for this weekend’s GNCC event in South Carolina as he was at home in Massachusetts dealing with his health situation. The GNCC Racing Series would like to send out their continued thoughts and prayers for Girroir.

As the FMF XC3 125 Pro-Am class took off it was Trail Jesters KTM’s Jesse Ansley grabbing the $100 Wiseco holeshot award. As the group of riders came through scoring on the first lap it was Beta Factory Racing’s Cody Barnes leading the way, with Highland Temp Works/Offroad Racing Schools/Maxxis’ Jason Thomas in second and Ansley running third. Barnes would remain in the lead up until the two-lap card came out, at which point Ansley made the pass for first. Ansley would continue to push and place a gap on the rest of the FMF XC3 riders, and ultimately finish 3 minutes ahead of Barnes who came through in second.

Grizzly Peak Racing/Yamaha’s Anthony Federico made the move up to third as he came through on lap four, right ahead of Thomas. As the group headed out on the fourth lap, Thomas was forced to end his race early. Lojaks Cycle Sales’ Chase Colville finished out the race in the fourth place position followed by Talon Soenksen in fifth.

As the riders continued to make their way through the finish line it was Trail Jesters KTM/FMF/Edelmann Sales Simon Johnson earning the Top Amateur honors as well as the 250 A class win. Coming through second was Seminole Powersports/Answer Racing/Bell Powersports’ Bryce Koster earning a spot on the overall amateur podium as well as second in the 250 A class, following Koster was Team Green Kawasaki/Bryan Easler Toyota/Atlas Cycles’ Brody Johnson rounding out the overall podium and 250 A class top three.

As the 10 a.m. race got underway it was Rockstar/Husqvarna/Moose Racing/Shaw Wines’ Tayla Jones grabbing the early lead and placing a gap on the rest of the morning riders. Fly/Maxxis/Pro Circuit/KTM’s Becca Sheets came through the pack second followed by AmPro Yamaha’s Rachael Archer, KTM/MEPMX/Fly Racing’s Mackenzie Tricker and Tely Energy Racing KTM’s Brooke Cosner rounding out the top five after the opening lap. As the race wore on, Tricker would make the pass on Archer for third in the WXC class. Jones would take her third win of the season and the 10 a.m. overall win followed by Sheets coming in second overall and in the WXC class.

A battle for the 8 a.m. youth overall race was instore for this past Sunday’s Camp Coker Bullet GNCC. Tely Energy Racing KTM’s Joseph Cunningham would hold the lead for the majority of the race, however Trail Jesters KTM’s Brayden Nolette would be pushing hard for his first overall youth win as well. Nolette would make the pass on Cunningham as the two-lap card came out, but it wouldn’t take long for Cunningham to make the pass back and hold onto lead until the checkered flag flew. Nolette would finish second overall and in the YXC1 Super Mini Sr. class. YXC2 Super Mini Jr. rider and Kawasaki/Team Green’s Grant Davis came through to earn third overall in the 8 a.m. youth race, while also taking his class win.

At the start of the 1 p.m. pro race on Sunday, out of 51 entries the GNCC AMSOIL Moto Hero was presented to William O’Brien from Whispering Pines, North Carolina. O’Brien competes in the Vet B (30+) class, and even earned his class win on Sunday after being presented with the Moto Hero award. O’Brien is in the US Army Special Forces. He is a 19-year Active Duty Special Forces 18B with six combat deployments. He currently serves as a long range weapons instructor with the Advanced Skills Company, 3rd Special Forces Group.

The event was co-sanctioned with our friends at SETRA, a series that produces local racing events in the southeast, and ultimately brought out a full slate of local racers. The 1 p.m. Bike Pro race was broadcast LIVE in its entirety on RacerTV.com and can be viewed as archived video online by visiting the GNCC LIVE page online. A highlight show featuring the event will air on NBC Sports Network on Saturday, June 23 at 2:00 p.m.