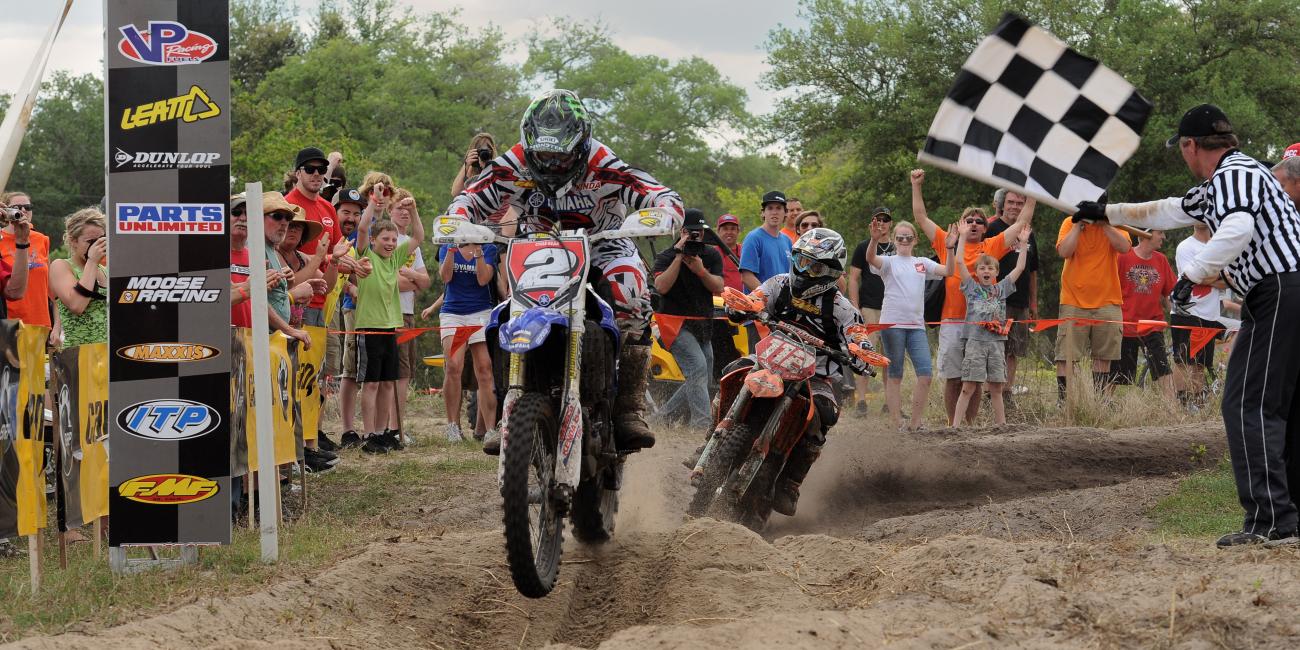 MORGANTOWN, W. Va. – New Zealand’s Paul Whibley captured his second AMSOIL Grand National Cross Country Title in 2012, outlasting his competition throughout the 13-round series. This season, the 34-year-old Whibley now finds himself facing the pressure to defend against a rising tide of young off-road racers just about to step into their prime, as well as a solid group of GNCC veterans. The battle starts next Tuesday, March 12, with the Moose Racing Westgate River Ranch GNCC opener.

In addition to the two-time champ Whibley, several other GNCC past champions will line up at next week’s season opener with hopes of securing the first win of the season in Southern Florida. Whibley’s toughest competition last season, Ohio’s Kailub Russell, will return in 2013 aboard a familiar Factory FMF/KTM 350 XC-F and an even bigger desire to win the title. Russell’s teammate and 2011 XC1 champion Charlie Mullins also returns to the FMF/KTM squad, after going through a rough post-championship season in 2012, plagued with injuries and mechanical issues. Mullins has been stronger than ever in the pre-season competition and looks to be a title contender once again this year.

After wining the 2010 GNCC championship, Australia native Josh Strang broke his leg at the season finale in 2011, which caused him to miss the mark for GNCC scouting the following season. The 24-year-old eventually signed a deal to race the WORCS series for the remainder of 2012. After a one-year hiatus, Strang returns to GNCC this season aboard an all-new Rocky Mountain ATV/MC team on a privateer-backed KX-450F, adding yet another twist to the 2013 fight for the title.

Perhaps two of the rising stars this season could be West Virginia’s Thad DuVall and New Zealander Rory Mead, who each secured their first XC1 career win last season. DuVall will return to his Shenandoah Honda/USWE-Sports.com team in hopes of carrying over the consistency and speed he had last season, while Mead makes the jump to the FMF/RPM/KTM Team Maxxis squad. And then there’s AmPro Yamaha’s Jordan Ashburn, who showed great promise in his rookie season. Ashburn grabbed two podium finishes in 2012 and the Tennessee boy is expected to only get better with age and experience.

Indiana’s Chris Bach can never be counted out of a Florida win—or any other round for that matter—as he debuts an all-new program this season. Bach will compete aboard a Carolina KTM 350 SX-F with a privateer-backed effort this season. Japan National Cross Country champion Takeshi Koikeda will make the switch to Honda this season aboard a Litz Racing/Ride Center USA/South of the Border backing.

Former XC2 Pro Lites champion Steward Baylor Jr. planned to make his XC1 debut aboard the Factory FMF/KTM team at Round 1, but the 18-year-old recently underwent surgery to repair an ongoing wrist injury that will keep him out of the beginning of 2013. However, reigning XC2 champ Jason Thomas will be back in the Lites class to defend his title, partnering with former GNCC champ Shane Watts and the DirtWise Schools/KTM-Parts.com/Maxxis team. Thomas will have his hands full with F.A.R Husqvarna’s Andrew DeLong, who finished third in 2012. DeLong suffered from an injury early in the year, which caused him to play catch up all season long. However, the Pennsylvania native was able to grab five wins in the second half of the season to give him full confidence in contesting the XC2 championship this season. Jed Haines will return under the Obermeyer Yamaha/Raines Riding University/Offroadviking.com tent, while Pennsylvania’s AJ Stewart, who finished fifth overall in 2012, will contest the XC2 class again this season.

The XC1 and XC2 classes will race for three hours on a demanding, whooped-out sand track at the Westgate River Ranch. The race begins at 1 p.m. on Tuesday, March 12, fitting into the Daytona Bike Week schedule. Classes are also available for a full roster of amateur and youth riders.

The track is located at the Westgate River Ranch in Lake Wales, Fla. From U.S. 27, go south to S.R. 60 (Lake Wales Exit), make a left and head east for approximately 25 miles. River Ranch is on the right.

Tune in Tuesday at 1 p.m. EST for the debut of the GNCC LIVE webcast from Westgate River Ranch, providing audio and video coverage of the ATV Pro race. Stay up-to-date with exclusive content from the 2013 AMSOIL GNCC Series by following the series Facebook, Twitter and Instagram.