Welcome to a Very Christmas Quick Fill! We've made a list and checked it twice, and indeed there are a few news nuggets from the GNCC trail to share with you. And don't worry, if you're using this foray on the computer to hide from family, you can stare at this screen all you want. They'll still be there when you're done.

Remember, Thanksgiving fell on Thursday, too, and I took that Thursday off. But once Carrie Russell Coombs found out about that, she told me we won't be slacking on Christmas. After all, what better gift that the gift of GNCC Racing! 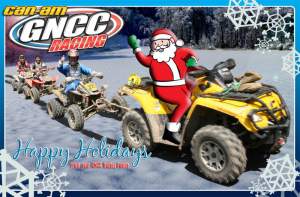 And here's the gift we have for you. Surely everyone reading this is familiar with the Snowshoe GNCC. It's a tough place to race an ATV or a dirt bike, but it is one heck of a ski resort, andÃ  the good folks at Snowshoe want to show that to you. So, they're going to host a special "GNCC Weekend" at Snowshoe on January 30-February 1, right in the heart of ski season. More details will come in soon, but for now, we know Snowshoe is planning room and lift ticket discounts. All you will have to do is show your AMA or ATVA card so we know you're a racer, and you'll get the discounts. We're kicking around a lot of fun ideas to make this a big weekend, maybe getting our friends from Can-Am to bring in some Ski-Do snowmobiles for demo rides, and stuff like that.

Only a few things left, here. Nathan Kanney must have finished his Christmas shopping early, because he had time to put together an awesome blog on his website about the laptimes of the top GNCC Pro Bike Racers. Click here.

Christmas also came early to Honda riders, as the Red Rider Rewards (contingency) program) for 2009 hit the presses this week. This is good money for bike and ATV riders, so enjoy. Click here to read about it.

GNCC TV takes a quick break this weekend as we re-air the AMA/Air Nautiques Amateur Motocross Nationals from Loretta Lynn's. If you've heard about Loretta's but haven't seen it in person, this show will give you a good idea. Check it out on Saturday at 3 p.m. By then you will have played with most of your new toys anyway.

And of course, it doesn't matter what season it is for you, it's the season for racing if you're Paul Whibley. Here's his latest race report from Down Under.

The forecast for the day was rain, but none had dropped by the start of the race, so many were thinking we had escaped lightly. How wrong they were, afterall, this is a Bush Rider's event and it wouldn't be the same without some rain.
Off the line I got a great start and took the holeshot. We bypassed the pits and "The Log" on the first lap and headed out into the hills. The track was good with some nice scrub-filled gullies and a muddy creek to thrash through. There was even some dust on a couple of the farm raceways. Not for long.
On the second lap I had extended my lead over team Yamaha rider and former NZ XC champ Adrian Smith when light rain began to fall. The track quickly began to get extremely slippery. With hard clay underneath and a film of some kind of gorilla snot over the top, the track became really difficult. Riders began to have trouble climbing the hills and even the down hills became gnarly. One in particular had a couple of tight turns and ran down through some scrub. No matter how slow you began the decent, by the bottom you were out of control and hauling.
After the fuel stop (thanks Carol and Joy) I had enough of a lead where I could cruise and not risk any major crashes and just have fun.
I had built enough of a lead that I fitted an extra lap in before the 2 hour cut off. Adam Reeves, NZ XC #2, charged hard through the second half of the lap, to close the gap on his teammate Adrian, but not enough to make a pass and came home in third.
"The Log" that had a few people scared, but it wasn't as bad as many feared. Good on those guys who gave it a go and made it over. Even a couple of the Juniors gave it a crack.

And on everyone else reading this, too. Merry Christmas. Happy New Year. We'll see you right here next week...next year, too.